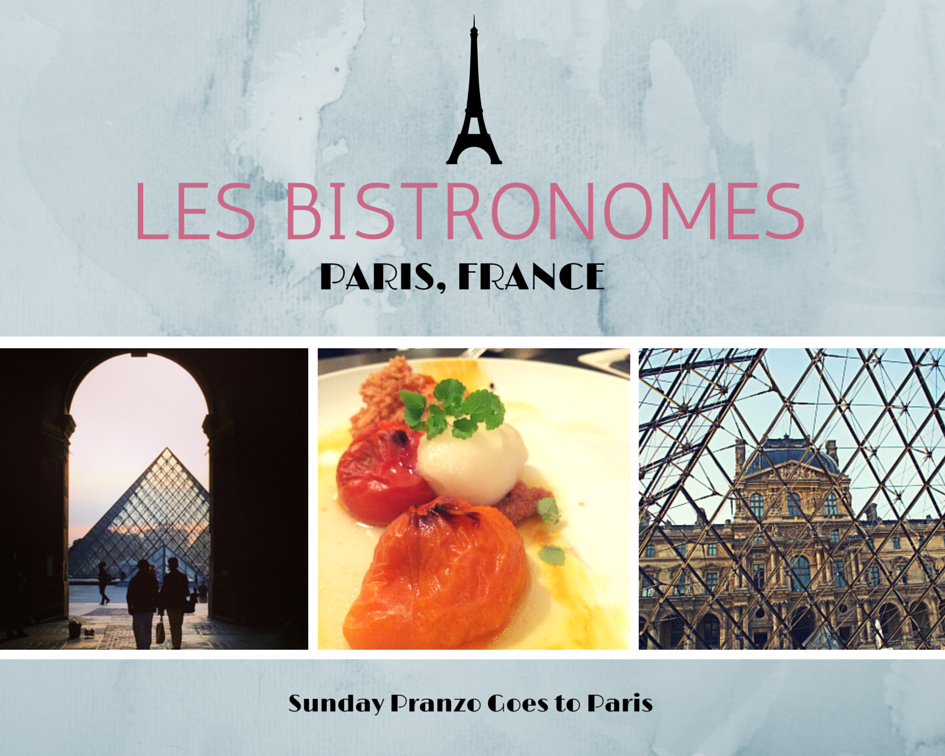 A narrow quiet candlelit dinning room with accents of slate, natural woods and a chalkboard with expertly handwritten “Shalapata” across it in white chalk. We were the typical tourists that night dinning at an early 6:o0 pm for Parisians which meant we were the first to arrive on a Sunday evening at Les Bistronomes.

I was looking for a perfect final meal to send us off back to Canada. I wanted something to dream about, something that would call me back in my moments of longing for travel, something that plagues me the most in February and March (if not all year round).

The entrance was charming enough. I was nothing but happy to be there with my family (+1 meathead). I had searched on and off for a restaurant that was located near the Marais/Louvre areas that wasn’t touristy but also delicious. I took to Twitter asking the experts: David Leibovitz, Paris by Mouth, Meg Zimbeck, French Foodie and others but to my dismay they couldn’t come up with anything off the top of their Tweeting fingers. Then suddenly I decided to take to TripAdvisor.com, something I only do in my most desperate of moments or when I really don’t know anything about both the area or can’t get a reservation in a strange land.

Although, no matter how many reviews you read – the good, the bad and the ugly – in the end you just have to make the call. What you might find to be the best restaurant will inevitably be someones worst dinning nightmare for some reason or other.

The TripAdvisor reviews were admittedly varied with locals ending up on either side of the knife. But then this thought occurred to me, a thought I still ponder over its meaning if there is one.

The Parisians, and the French country as a nation, have been eating well for well over 200+ years – besides that time they ate rats… – but here in the Okanagan our foodie scene is only first starting to bud in the scheme of history. Realistically, the Okanagan has really only been eating well (and can compete with some of Paris’ best) for 10 years or so. I myself have only been eating well since I discovered my love for food in 2005. So it occurs to me the French have the right to be choosy over their restaurants. What I might find divine could be very run of the mill for Parisians which is why many of them couldn’t recommend me a delicious restaurant in the 1st arrondissement when I asked on Twitter.

In the end, and exhausted of searching, I chose #1,927 of 13,296 restaurants, Les Bistronomes. Was it a winner? I felt as though I was taking my life into my hands. The end of the trip would be punctuated by this meal, for better or worse.

I had made up my mind before even sitting down, that I would have everything you ought to have when you are in Paris on your final evening. This meant I was ready to have a three course meal with French wine throughout and end it with a cheese course.

Each meal arrived with heartier portions of rich French classics that I didn’t expect from a chic looking bistro. You certainly get your money’s worth despite the typical expectations from dinning in Paris – your wallet won’t be as light as what you’d think upon your return home if you play your cards right.

If you’re in the mood for classic terrine, paté and cheese this is the place for you. Frankly, I was more intrigued by their appetizer dishes with the house terrine – a large serving of a paté encased in phillo pastry – and the sausages spit roasted with pistachio and porto gravy. More than enough for a nice dinner at home but there I was looking to make the most of the entire meal. As Kirstin Newman says in her memoir “What I Was Doing While You Were Breeding” – it felt like “the thing you’re supposed to do in the place you’re supposed to do it”.

So I went on preordering my meal and dessert, the cheese plate, like a happy fool. For our mains we were again all shocked at the size of each plate and portion. The plate not only had enough room to be a well rounded meal with protein, veggies and starch but there was also plenty of room for decoration allowing each plate to look like a landscape upon a rippled white porcelain surface.

Upon our table were two large steaks, simply too much for one hungry man on his best day. The steaks were the only dinner plates served simply without any accoutrements other than a rich sauce to be poured overtop at one’s will. As for myself, quail with peas, braised sausage and romaine lettuce with a rich jus as its bed.

With the large appetizers I could hardly finish my dinner and I now lamented the thought of a cheese plate for dinner. How could I possibly? Well I did. And then rolled my way back to the heart of the Marais! Fromage Français is one of those things you just have to have in the place you’re supposed to have it.

So is Les Bistronomes dream worthy during a bout of wanderlust? Absolutely.
I would mostly recommend it for its classic rich French terrines and paté (what they are famous for), excellent wine selection and the cheese!

Have any memorable meals from Paris you’d like to share?
Feel free in the comments below! That is the point of my online Sunday Pranzo series after all…Sharing foodie stories!

Don’t miss out on posts. Sign up here for my monthly Newsletter now sent on the 1st of each month! Get a postcard when you sign up!