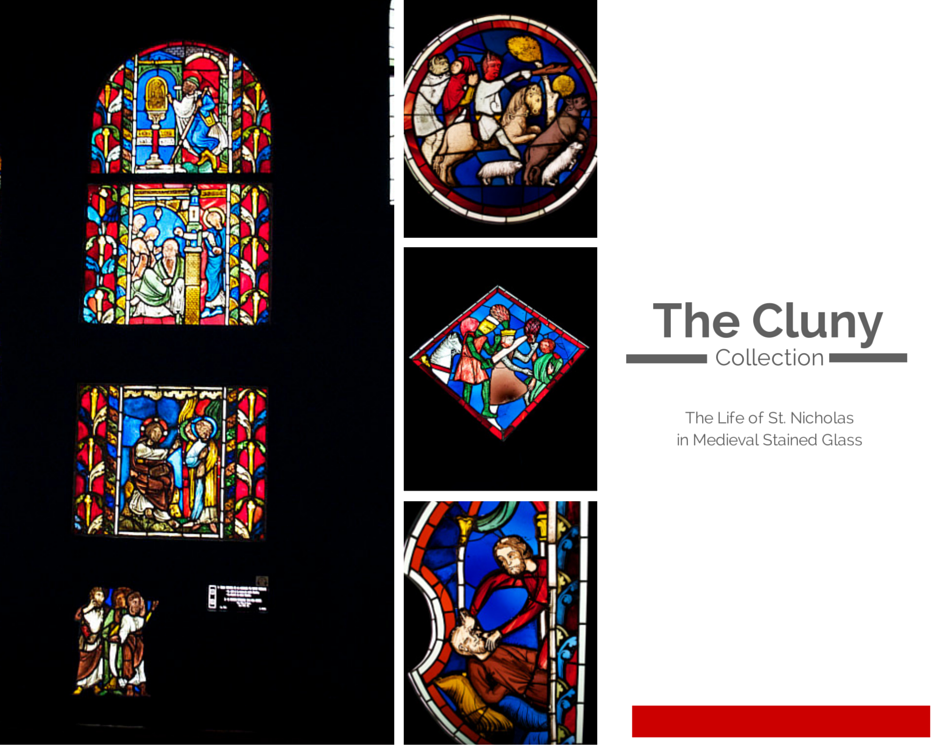 For those of you new to the ArtSmart Roundtable, we are a group of travel bloggers with a passion for art. We write monthly about a designated topic publishing it on the first Monday of each month (although I am a little late). This November our topic is “Hidden Gems” and I’ll be focusing on the oldest living stained glass featuring the life of St. Nicholas, on display at The Cluny Medieval Museum in Paris. You can find more hidden gems highlighted by my colleagues at the bottom of this post.

As soon as Halloween ends the hype over Christmas seems to become rampant as stores and even television begin to shovel the holiday spirit down our throats. I love the holidays but when I saw that the movie “Elf” had taken the place of The Simpsons’ Halloween Treehouse Horror episodes in less than twelve hours since the last trick or treater visited our house…I had to cringe.

Perhaps this post is the result of commercial brainwashing but in truth this hidden gem has been on my mind since July. The hidden gem in question is the stained glass collection at the Cluny, most commonly known as Musée National du Môyen Age. The Cluny is a Medieval museum that exhibits some of the most impressive and famed Medieval artifacts from French history: The Lady and the Unicorn tapestries, the original heads of the Kings from Notre Dame and the original stained glass windows from the nearby Sainte Chapelle, to name a few.

The Cluny is a hidden gem often neglected by tourists. In its secret fame among those in the know you’ll often find this museum empty. This was especially the case during my visit despite it being the height of tourist season and before noon. By the time I finished my exploration of the Cluny there was a large group of students entering the museum. I had unknowingly timed my visit perfectly and sipped on a well deserved kir royal just outside of the St. Germain church not far from The Cluny.

With so many famed objects being exhibited as I write this post, and I hold many of them in very high regard, one is ringing in my memory as I see all these Christmastime jubilations. Let me explain…

The stained glass room at The Cluny evokes a pure sense of magic upon entry. The room is dark, the walls black and the stained glass illuminated so that each colour and line is showcased perfectly.

The room is a visual merrymaking with every colour like it was peeled from a gem or a ruby and carefully set in place to create a biblical narrative. I am not religious, as I have stated before, but it is relics and priceless objects from days of old that strike the chords of my soul. The devotion, not only to a higher being, but to the objet d’art the artist(s) portray through their surviving work is what fascinates me.

Featured are stained glass windows that once belonged to Sainte Chapelle, Troyes Collegiale, St Denis and come from all corners of France.

One stained glass set in particular, The Life of St. Nicholas from Troyes, I found most compelling not only for the intricacies of colours and scene but also because it is the oldest living stained glass that depicts St. Nicholas.

The top panel shows a man arriving at the statue of St Nicholas praying to have his belongings returned after they were stollen from his home. I’ve come across versions where this men is Jewish and he kept a St. Nicholas Statue in his home in hopes of protecting his cherished belongings. But I’ve also come across versions where thieves has robbed his home and he ventures to go see the statue of St Nicholas.

The ornately decorated columns both within the scene and flanking the narrative as well as the fine detail of the St. Nicholas statue is astounding. Interestingly, the vibrant green is still holding strong in comparison to the panel below where the green is much more faded.

The bottom panel depicts St. Nicholas giving a father money so that he can keep his daughters from a life of prostitution. Since St. Nicholas’ parents were wealthy but had died when he was young, he was able to give and be generous such as in this case where the father had no money for dowries.

Seeing the oldest know depiction of St Nicholas in vibrantly colours and rich details it makes one wonder how did he become so misconstrued. The true meaning behind St. Nicholas is certainly giving to those in need and this story has inspired me to give a bit more to my favourite charities close to my own heart. And any hidden gem – big or small, popular or secret – that inspires you to do some good in this life is worth sharing.

“The Imperial Treasury in Vienna” by Christina of DayDream Tourist
“Discovering Contemporary Art in Roswell, New Mexico” by Ashley of No Onions Extra Pickles
“A Hidden Treasure of Tolerance in Amsterdam’s Red Light District: Our Lord in The Attic” by Pal and Lydian of Art Weekenders
“Away From The Crowds: 6 Lesser Known Museums” By Jenna of This Is My Happiness