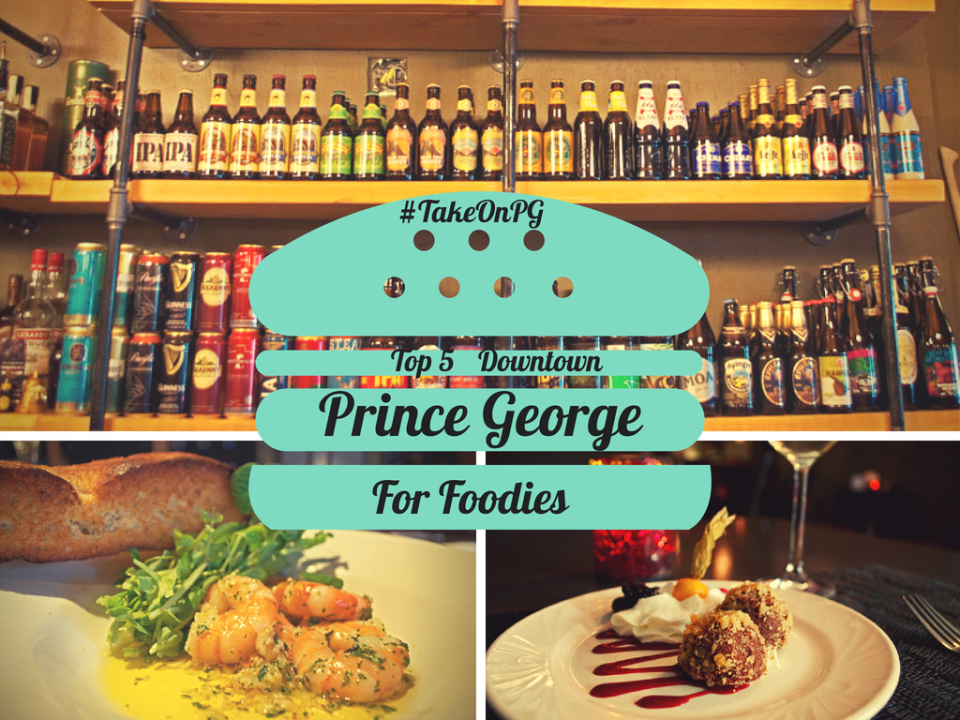 As a kid the best place to eat in Prince George was North 54 then called Damareno’s which offered Italian food at it’s finest. It was an anomaly back then and I only got to eat there once when I was eleven because it was usually where my parents escape to during date night. Today quality food is still being produced there under their new name North 54 and good food is no longer hard to come by with a well established food scene.

Downtown Prince George is conveniently located within walking distance from my hotel, The Ramada Inn and from there I would walk 3-8 minutes max to each restaurant. Not only that but every meal was under $65 Canadian including minimum 2 courses and 2 glasses of wine. Thus being not only delicious but economical.

What I also noticed about the Prince George restaurant scene is that despite being populated with fine dinning restaurants the establishments themselves keep the atmosphere casual and relaxed. You can enter from being fresh off a canoe or bike (as one does in PG) and enter without worry or judgement. It’s a different kind of food scene where nothing is frowned upon but rather celebrated.

Here is a foodie’s tour of Prince George with my top 5 spots to check out some of the best dinning options on offer.

The fancy cursive and low key exterior is misleading. Inside you’ll find a packed house with all walks of life from business men to beer nerds and hipsters. They all take in the live music or comedy shows offered here while enjoying a craft beer. I was recommended Nancy O’s by local beer and wine experts Joe and Liz who have been helping customers craft their own brews for over 20 years at Caribou Brewmasters.

In fact, they even helped my own parents make and bottle wine when I was thirteen. I remember rinsing the bottles, sticking on the labels, and even sneaking my first taste of wine with a friend.

Joe, Liz and their knowledgeable staff recommended I head down to Nancy O’s for a piece of Portlandia-like beer revolution to get a taste of the local brews or any craft brews from other parts of Canada and the world. I stopped in for lunch and tried the Sandal Ale by Scandal Brewing along with a tasty avocado sandwich. The place keeps it simple. You can only order if you head up to the counter and select your meal from their board of specials and regular offerings. You then can then try to decide wether you want to travel the world via beer or stick to local brews. Nancy O’s is the place for beer, entertainment and taking it easy downtown.

PS – don’t embarrass yourself by asking for a Miller Genuine Draft!

Favourite dish: Spinach & Ricotta Ravioli
*(but I find myself daydreaming about those chocolate truffles)*

The best fine dinning meal I had in Prince George was at this Italian restaurant that has long been a fixture in the downtown core. Perfectly cooked pasta, rich desserts and well priced wine list I was tempted to return the following night.

As I said, my parents used to eat here all the time and would rave about the mushroom polenta. They’ve unfortunately taken it off the menu a few years back but I was the second person that week to ask for it. Trust me when I say that they need to bring this back! I ate it when I was eleven and still remember it.

Tourism Prince George held a Facebook vote where their fans chose wether I would eat at Cimo Mediterranean Grill or Wild Goose Bistro. Comments and arguments ensued and Prince George’s passionate foodies debated over which restaurant would offer a visitor an ideal dinning experience downtown. It was a close one but Cimo’s won by a a few votes. Famous for their pasta I was more impressed by their delicious shrimp appy served with the popular garlic bread. I was unable to pass up both the wine and dessert of course: you can take the girl out of the Okanagan but you can’t take the Okanagan out of the girl! Okanagan wines were price at or just below some of the prices I am used to paying here in my home town! For dessert I was blown away by their perfectly smooth pear crème Brulée. It’s always packed here so reservations are a must!

Favourite dish: Try the 5 course meal at $60 per person and customized to your taste!

Not too many places I know will customize a 5 course meal at the drop of a hat. Normally you’d have to pay over $75 minimum for a service like this anywhere else and it wouldn’t exactly be customized. I had the pleasure of joining them for lunch and on that hot day was unable to stomach more than two courses again with wine. The mussels in their leek and very garlicky broth hit the spot and to top it all off their blueberry angel food cake with ice cream was just the fuel I needed to go for another hike. After this food tour I was in need of a marathon!

The Twisted Cork, almost across the street from the Ramada, is where I chose to linger during my last couple of hours before I departed Prince George. I sat at their welcoming bar that made me feel like I was on the set of Sideways. I made like Paul Giamatti’s character and ordered a 9 oz glass of Okanagan wine and reminisced over the past and my trip back to Prince George.

It’s funny how a city changes and yet doesn’t. The food scene sprouted not long after my family had moved and yet I could still return to my last home we lived in before leaving, my friend’s houses, my old elementary school. It was a melancholy fact that my school had torn down the “adventure” playground that was as much of a hazard (splinters and “pantsing”while stuck on the monkey bars) as it was a source of joy. The forest is still a character, a force to be reckoned with but also a place of exploration and learning.

Thank you to Tourism Prince George for having me #TakeOnPG in July.

Discover more of British Columbia’s food scene by signing up for my newsletter here.