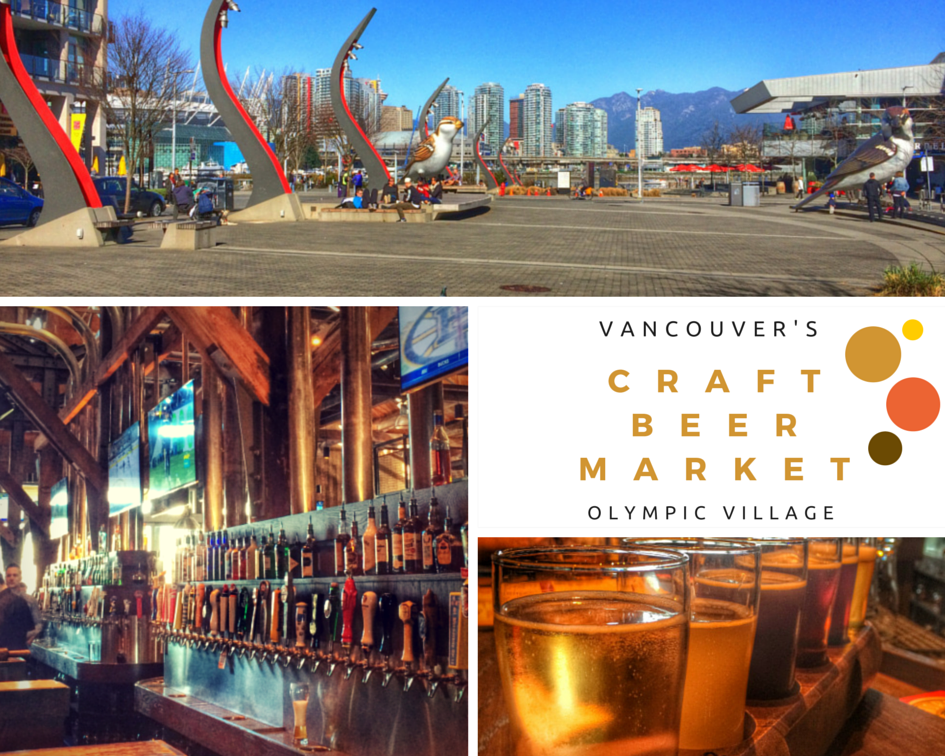 Happy St. Patrick’s Day! I’ve got beer on my mind and during my last visit to Vancouver I was able to explore a completely new area – The Olympic Village aka False Creek neighbourhood.

It’s amazing to think that before Vancouver was announced as the host city of the 2010 Winter Olympics this neighbourhood was a grey zone. Nothing but old warehouses and parking lots. Today it’s a booming neighbourhood where only locals and those in the know flock to drink beer with the perfect view of downtown Vancouver.

Craft Beer Market is THE place to hang out with friends, watch a hockey game and taste both local and international brews.

Located in the historic Salt Building, where ships would dock to be filled with salt then shipped around the world, this beer nirvana attracts tourists, history buffs and beer nerds alike.

Today I can imagine this building being filled with a sea of green and tables of Guinness or green beer.

The exposed beams and piping taps give it an ere of a classic maritime communal drinking houses. The knowledgeable staff almost all have some form of facial hair, some bordering on hipster, some are pirate patchy and others with a full Hemingway-inspired beard. It’s like a year-round Movember ad.

But whether facial hair is your thing or not these guys know beer. And they certainly don’t judge if you don’t. Not sure what to order? Ask. They’ll ask you what flavours you tend to enjoy more – citrus, hoppy, light, caramel, coffee, chocolate, etc. They’ll return with a selection of small tasters for you to make an educated decision without wasting your money on something you just won’t enjoy.

If you’re a bit more experienced and like a wide variety of beer each week Craft features a new “6 Pack Sampler” a flight of beers from local breweries or around the world. Left to right, the “mini” beers are organized from lightest to more intense.

Beer just isn’t your thing either? Then wine, cocktails and tough liquor are all in stock as well as classic “man-food” as my dad likes to call it. Burgers, wings, tacos, nachos, flatbreads are all there with some delicious twists that you’d expect from a place like this.

It isn’t some pub. It isn’t just a beer market. It’s a fermented firmament with a gastropub menu.

Want more beer around the world? Check out these posts below…

How to Pour the Perfect Pint of Guinness

A Foodie’s Tour of Prince George