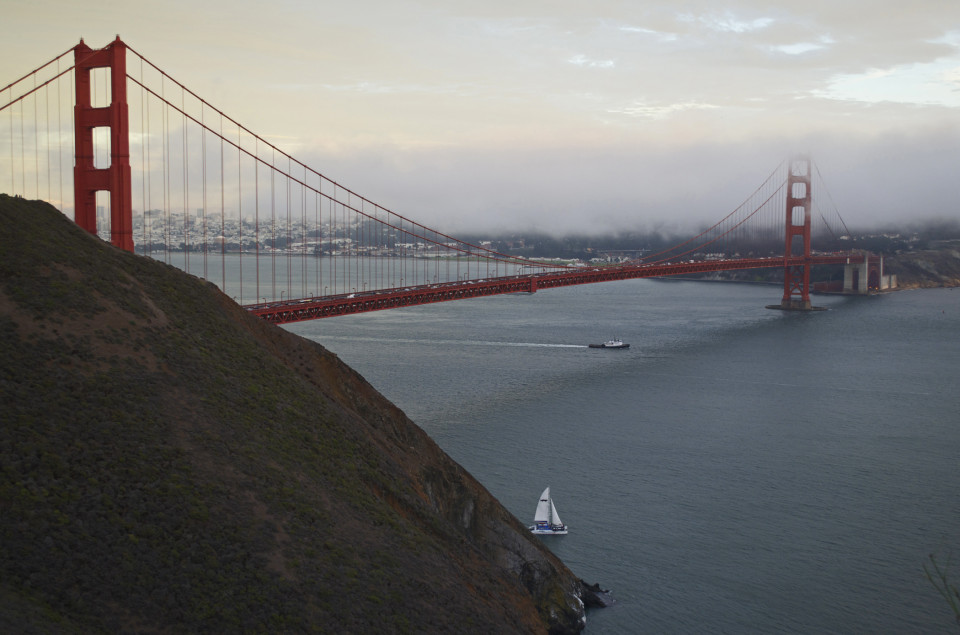 Ever wanted to take a road trip around the Bay area in a ruby red Volkswagen bus equipped with California crafted beers? I did with Erik, designated driver, guide, owner and genius behind Vantigo San Francisco tours, at the wheel. Vantigo offers city tours, oyster lunches at Hog Island’s oyster farm and North Bay brewery tours just over the Golden Gate Bridge. I opted for the brewery tour since I’ve dragged my boyfriend on countless winery tours despite the fact that he can’t stomach red wine and mildly tolerates white.

Vantigo picked us up at our hotel location along with 3 other people who accompanied us on our tour that day including Lisa from Cooking with Rhubarb (I love meeting other bloggers unexpectedly!).  As we departed the city Erik prompted us to tell each other a bit about ourselves as well as our experience and knowledge of beer (from 1-5, I being a 0.5) as we sipped on some local brews and nibbled on some locally inspired snacks in the back of the Volkswagen (yup you get beers on your way to the breweries!). If you’re not a fan of beer you can choose to have wine on the other non brewery related tours.

The Vantigo Brewery tour isn’t just about the consumption of locally made beers on the site they were brewed but it’s an education as well. While we sipped on our brews Erik had us pass around various hops and seeds in jars to smell enabling us to recognize what our current beers start as and prepare our palates for heftier beers to come. My favourite part was when we circulated different cheeses and were able to determine which beer tasted best with each cheese without judgement or snobbery, after all beer tastes best with whatever you feel tastes best with it. Also on our way to our first stop, Lagunitas Brewery in Petaluma, Erik pre-ordered our lunch by phone after we filled out a menu. I wasn’t sure what to expect. The menu presented a selection of gourmet sandwiches, pulled pork nachos and other menu items that I would expect to find at my local gastropub.

When we made it to Lagunitas I was amazed. This brewery is hidden behind a grey block building filled with corporate offices but if you head behind it there’s nothing short of a huge party with live music, a grassy amphitheatre where beer lovers, their dogs and their children bathe in the sunshine as food and drinks are brought to their blankets. Just past the amphitheatre are shaded tables and a rompin’ band playing good music. It was in this area that we sat and were served a selection of Lagunitas beers and our delicious lunches with a brewery tour soon to follow.

Brewery tours couldn’t be more different than wine tours. Wine tours, I have found, are filled with interesting facts about the terroir, talk about the growing and ageing process with a usually very serious guide. On the other hand, Lagunitas’ guide for example, had a sense of humour, a pride in the struggle and controversial history of the brewery and was very short on the brewing process. I’m sure there is more to the terroir of hops but the hops Lagunitas uses comes from places like Alberta, Canada for example. With a full beer in hand 40+ of us followed our grizzly John Goodman guide with a Big Lebowski flare around the grounds enthralled with the stories about Lagunitas and its owner Tony Magee which included troubles with the local cops to the federal label approving agency (BAFT) due to their Kronic beer now known as Censored, and the ABC (Alcoholic Beverage Control) who shut them down for 2o days due to “Disorderly House” but that’s another story you’ll have to visit to hear or buy the book.

After Lagunitas the VW bus was filled with happy patrons with a bit of a buzz, in all honesty, and we then headed from Petaluma (where American Graffiti was filmed) to Fairfax where Iron Springs Brewery serves paddles featuring 6 beers of your choice along with some good food. The vibe here was much more laid back, less of a public party and more of a space to relax outside where a few deer even wandered through our hillside view. Surprisingly the Black Magic Rye beer was my favourite and had a coffee and chocolate smell but a smooth and shockingly light finish for such a dark beer. If you leave your table to take the short brewery tour beware of scavengers like the local man who thought it would be okay to suck back as many of our beers as possible before our return…To repay his debt he bought the table another paddle but the awkward damage had been done.

Onward and upward we continued on to the Marin Brewing Company which also offers an extensive food menu and eclectic framed newspaper clippings featuring the breweries favourite sports, boxing and mountain biking. It is nestled within a quaint outdoor shopping area painted in Cape Cod white. Marin Brewing Company ended up being a place for us to relax, reminisce about our day and ask questions. Vantigo is still in its infancy so we had the rare opportunity to talk to Erik, our guide, and discuss potential avenues for the future and where he wants to take this ingenious idea – from a stretch limo VW bus to a Napa Valley wine tours, be sure to check in with VantigoSF.com for new tours and additional dates in the near future.

P.S. Erik was so kind to stop at the Marin Headlands lookout so us Canadians could get a good picture of the Golden Gate Bridge as seen at the top of this blog post.