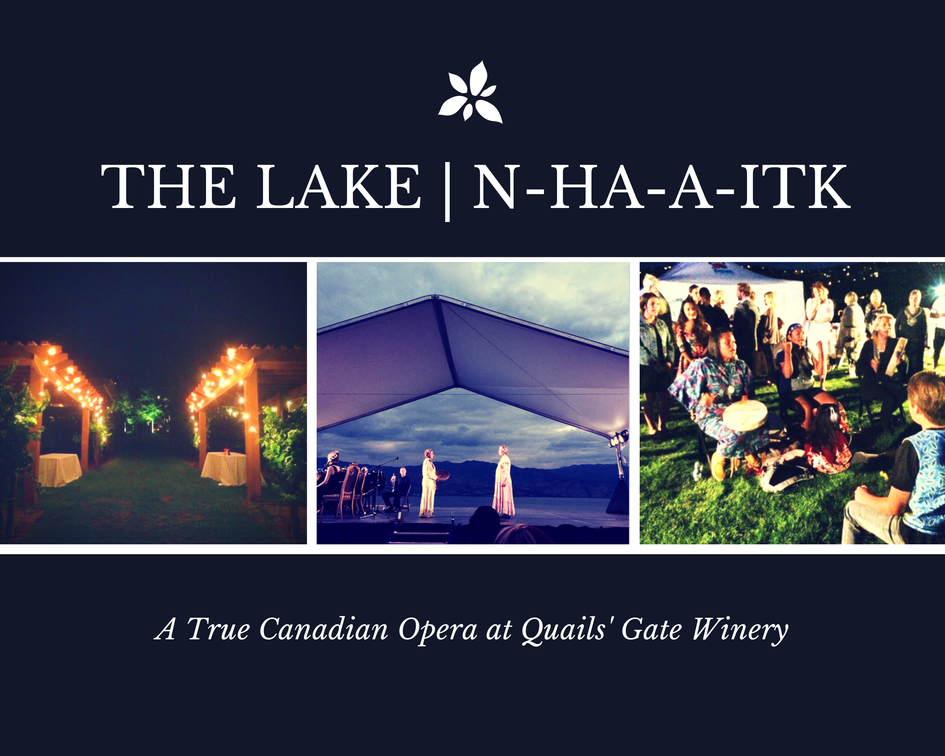 When I heard that the world premier of a sixty year old opera would be happening at the Quail’s Gate Winery I immediately bought tickets. It’s not often you hear Canadian and opera in the same sentence let alone get the chance to watch an opera performed within a vineyard overlooking the Okanagan lake.

Written in the 1950s by Barbara Pentland, a Canadian composer, the opera follows the story of the Allison family who settled in the Okanagan during the 1870s. The matriarch of the family, Susan, witnesses the mythical lake monster, N-HA-A-ITK, known as the Ogopogo today. The story explores the relationship between settlers and the First Nations Sylix people of the Okanagan as they try to communicate and understand cultural boundaries.

The evening began with an ominous sky, much as the setting should be for the worrisome night depicted within The Lake. Honorary guests such as the Lieutenant Governor of British Columbia and First Nations leader Chief Clarence Louie. With the presence of these two figures it was clear history was being made at Quails’ Gate wine, the very spot the Allison’s settled upon and made a home.

Pentland’s brief two act play was broken up with First Nations stick games – a playful game where the stakes can be a high as the players make them. For the evening two teams were made, boys versus girls, and during the intermission these stick games provided further entertainment as well as understanding between cultures. The game goes as follows: one member from the girls’ team holds a marked bone in one hand, members of the opposite team must correctly guess which hand the bone is in. If they get it right a member from the boys’ team then gets to hide the marked bone in their palm and so it goes. This game is played while the team with the bone sings and drums a song as ancient as the tradition.

Clarification was also brought to the audience that evening enriching our understanding of the Ogopogo, or N-HA-A-ITK. I’ve grown up hearing various stories of people meeting their doom or sightings of the lake monster. The Sylix nation, as explained by Jordon Coble, curatorial and heritage researcher at the Sncəwips Heritage Museum and accredited organizer of the event, believe that N-HA-A-ITK is the actual lake itself, the spirit, the bodies of water that empty into the Okanagan lake and the creatures within the lake as well as the creature of the lake. For centuries the Sylix people have honoured N-HA-A-ITK for providing life to the valley, today on the other hand it is seen as a metaphor for sustainability and the need to protect this life force.

The opera itself was an interesting experience. I have heard various operas in Italian but to hear one in my own language the magic had been lost. Perhaps it was the dull simplicity of the dialogue (“No John, don’t go”/ or a list of typical items such as wool socks) or the monotonous, sad tone of the orchestral music. Not at all as catchy as the First Nations’ songs sung that night.
Having an opera performed in a foreign language there is a mysterious quality to it where the the creative arts involved marry with the music to induce a sort of ephemeral enchantment. A bit of that is lost when performed in English, a language less elegant than French or Italian in my opinion.

However, the opera was saved by the inclusion of the female  Sylix artist, Delphine Derickson, performing within the native language alongside the talented female soprano, Heather Pawsey. Nearing the end of the performance the orchestral music began to compliment the simple yet powerfully pulsing drums. This for me was the achievement of the evening, the expertly integrated native drums and melodies within an opera.

The evening ended not with an affirmation of wether or not the Ogopogo was in fact sighted by Susan Allison on that stormy evening 141 years ago. But it did affirm the talent within this valley and the potential of cultures, even musical cultures, working together to create something that hasn’t been done before, at least not to my knowledge.
The fourth wall was broken by the cast with both the Sylix woman and Susan Allison leading the way into the audience encouraging us all to join hands and form a circle dancing to the heart beating drums. In doing so we created a friendship circle where we all became linked creating history where history had at first brought us together, perhaps with the encouragement of wine.
Let us all hope that more of these unique evenings are to come in the future.

Keep up with all my posts by signing up for my newsletter here.
Plus you’ll automatically be entered in all my giveaways and receive a postcard!