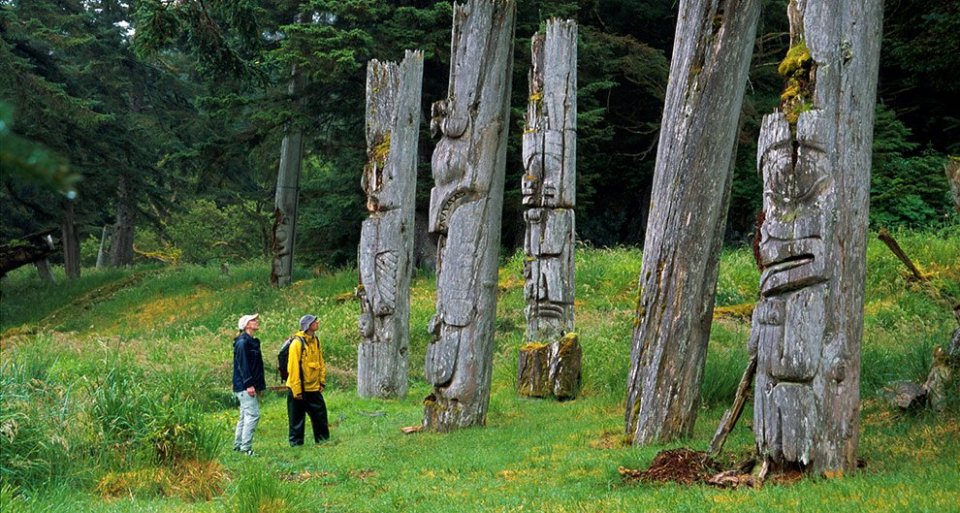 Thanks to a recent visit to the Vancouver Art Gallery, and a case of mistaken identity when it came time for my tour, I found myself learning about the history of the Totem Pole in British Columbia. After being sent to the 4th floor, then to the 2nd only to be sent back to the 1st floor where I first arrived, I finally found my tour guide in the knick of time.

I thought I would be receiving a tour of their most recent exhibition with Emily Carr in juxtaposition with works by Vancouver artist Landon MacKenzie but instead my guide took me through the gallery’s perhaps more overlooked performance exhibit, “On Stage”. With half the gallery closed off in preparation for the much anticipated “Forbidden City: Inside the Court of China’s Emperors” on loan from Beijing’s Palace Museum, I decided to go with the flow and see works that I hadn’t intended on paying much attention to due to time constraints. The results were enlightening and perhaps a bit perplexing as we moved from First Nation totem pole history with photographs taken in the 20s to a grand contemporary painting by Lawrence Paul Yuxweluptun called Burying Another Face of Racism on First Nations Soil, 1997 (see below).

But before I get ahead of myself, in case you aren’t familiar with ArtSmart, let me first explain that we are a group of travel bloggers with a penchant for art history. We write the first Monday of each month of a different designated topic. This month we are all focusing on “art and nature” and you can find links to my colleagues posts at the bottom of this page.

I at first struggled with this topic but then I thought about the British Columbian landscape and how familiar we are with Emily Carr’s translation of it as well as the exterior culture of the First Nations as she understood it. While it is debated whether or not Carr can be heralded as an artist/ethnographer capturing the disappearing culture of the First Nations OR was exploiting their culture and staging much of her works promoting the European gaze upon the First Nations – I will leave it up to you and encourage you to find out more by art historians who have dedicated their professions so the subject (see here). But I chose the totem pole topic or December’s ArtSmart discussion “art and nature” because in essence they are art erected within nature.

It is undeniable that Emily Carr exposed Canadians to a broader scale of images of the First Nations. For example, I came to first see totem poles through her work but also throughout the city of Prince George, where I lived as a kid. The Prince George art gallery has its own standing tall outside its doors. Tourists can even purchase miniature carved totem poles to take home a certain tourist shops throughout the province if not the country. But before Carr painted them without knowing their meaning their functions and meanings within the First Nations cultures were complex. Their future on the other hand would be dire and in need of saving.

What is a Totem Pole?

A totem pole, most often carved from Red Cedar for its softness, often depicts stylized animals, symbols and are placed before a building of particular clan or public gathering building like a longhouse. Typically, a totem pole only lasts for about 80 years due to the soft texture of the cedar poles.

The totem poles would be visible throughout the village and could be erected to display a particular family’s lineage, privileges, rights or special events. In this sense a totem pole cannot be read as a story but rather a sign to display the history of a clan or even their wealth if there are multiple totem poles. However, there are also mortuary poles that contain the remains of the dead in a cedar box. Rarely found, although they did exist, are shame poles that protest or ridicule a member or event – a notable example is a 2007 shame pole in Cordova, Alaska where a Tlingit fisherman carved a totem pole in protest of the 1989 Exxon oil spill in Prince William Sound in the Gulf of Alaska.

The End of The Totem Pole?

In an effort to assimilate the First Nations people, the Canadian government enacted a series of laws and acts that banned the First Nations from practicing their traditions and culture from 1857 continuing on until 1951. Their children were taken away and forced to attend residential schools where many were subjected to beatings and discouraged from speaking their native languages. Carving totem poles and participating in potlatchs were outlawed as well as many other important cultural events.

The 77 Year Journey of the G’psgolox Pole

The G’psgolox pole was carved in 1872 in honour of the mythical encounter of Tsooda and the Haisla tribe’s chief G’psgolox. Legend is that the chief had suffered the loss of his entire family as well as his tribe and in his grief he set forth into the woods where the Tsooda spirit came to him. G’psgolox shared his tale of sadness with Tsooda and with great empathy he gave the chief a rock crystal. Tsooda told him to return to his lifeless people and bite the rock. So he did and when he bit the rock crystal his people descended from the trees around him alive and well.

The totem itself depicts Tsooda at the top with an ever revolving hat. The middle creature the Asoalget spirit and at the bottom is a mythological grizzly bear who lives beneath the water.

During the 1920s there was a demand for “artifacts” from the First Nations. The government museums and galleries began to take First Nations belongings from beaded works and even cutting down totem poles to be displayed for the consumption of the general public.

One totem pole known as the G’psgolox pole, was cut down in 1929 under questionable circumstances in a Haisla First Nations village near Kitimat, British Columbia. Many people were capitalizing on the disappearing First Nations cultural heritage and stealing items from the First Nations that were still standing.
An “Indian Agent”, who acted as a intermediary between the government and First Nations people, Iver Fougner cut down the G’psgolox pole and sold it to the Museum of Ethnography in Stockholm.

The fascination with First Nations had spanned the world where even Sir Arthur Conan Doyle of England had called for the preservation of totem poles within British Columbia. The way in which this was enacted on the other hand was extremely disrespectful to the First Nations people who erected these poles.

The Haisla people did not know where their G’psgolox pole was headed and thus set fourth a 77 year search.
Unbelievably, once the pole arrived at the storehouse in Stockholm it sat untouched and store horizontally, without the protection or preservation called for by Doyle, for 40 years.

In the 1970s it was restored after a bout of dry rot and erected for the second time in its life in 1980 at the Museum of Ethnography. But it wasn’t until 1991 that the Haisla people take action and request for repatriation and the return of their G’psgolox pole. After years of talks between government officials, the Haisla and the Museum of Ethnography the pole was returned in 2006 in exchange for a replica pole carved in 2000 by the Haisla peoples and the insurance that the pole would be stored with proper care in a facility. It was the first time that a totem was ever returned from over seas.

Visions of Nature: The Designs of William Morris by Christina of Daydream Tourist

The Pazzi Chapel Restoration by Jenna of This is my Happiness