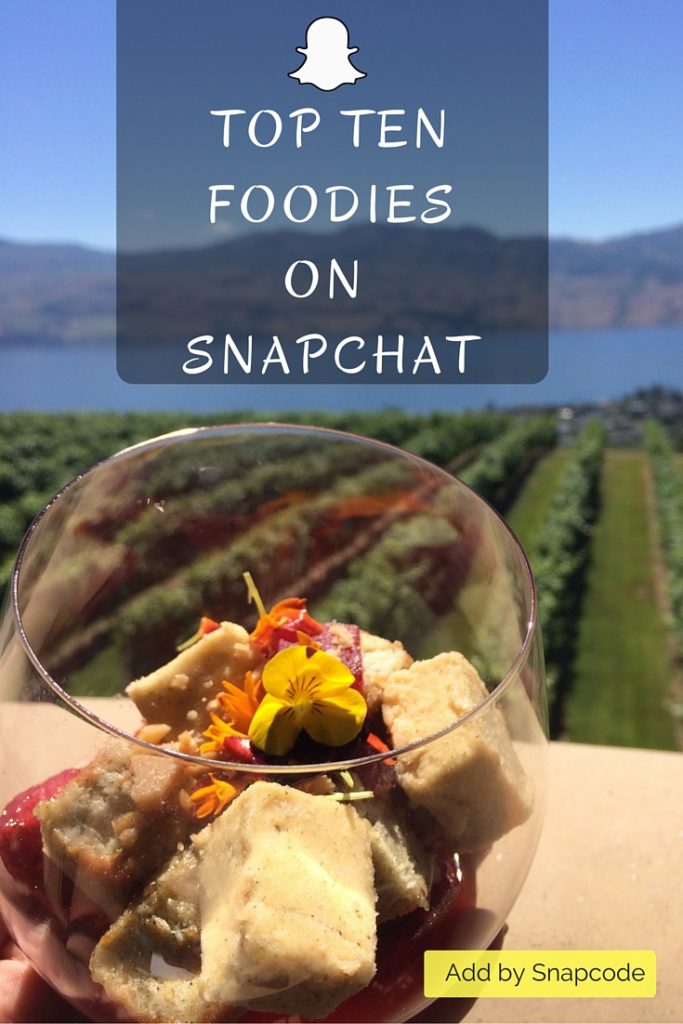 Until the recent addition of the GhostCodes app it was difficult to search out people to follow on Snapchat. Snapchat is now one of my favourite social media sources as a way to reach out to readers, friends and family. I have become addicted! Peaking into the lives of fellow foodies around the world, travellers near and far, celebrities and their daily events. For a long time I resisted Snapchat completely but now I can’t get enough. GhostCodes helped me to find a few foodies and travellers that tell a good story (it also helped me gain viewers). But since there are too many to name in both those categories I’ve narrowed it down to my top 10 favourite foodies, although travel and food and intrinsically linked so you’ll find some overlap.
All these foodie snapchat users snap efficiently and there are no 8-10 second long photos of someone’s face I promise! That’s one of my pet peeves – adjust your photosnap seconds people! Ain’t nobody got time for that!

To add these foodie snappers simply take a pic with your phone then add them as friends using the Snapcode option under Add Friends.

As her name suggests, Elizabeth lives in Rome and snaps daily about her garden (orto) in Umbria and her food tours she guides in Rome. She’s also the author of Eating Rome and some very helpful Eat Italy apps. I tune in each day to get my daily dose of Italian views as well as food and drink recipes. She has taken her viewers on wild asparagus foraging and mozzarella making. A must follow for any foodie snapper – plus I love her sunglasses (see snaps!).

Chloe is a restaurant owner in Dublin, Ireland. She snaps everyday with recipes, restaurants and the trials of owning your own business. She recently reached out to her viewers to see if they had any restaurant recommendations for an upcoming trip to Toronto. I replied with a few and in return she e-mailed me a long generous list of places to eat and drink in Dublin the next time I return – how awesome is she!?

If you don’t already know him from his famous cookbooks and popular foodie blog, Lebovitz is my go to resource for restaurants in Paris and delicious confections like cookies and ice cream as well as his recipes and snaps with strong drinks. His chicken that appears on the cover of his cookbook, My Paris Kitchen, is divine as well. Follow him for the Parisian life snaps, cheese and desserts!

Tess, the host exploring Norway through delicious drinks, is charming and can shake a mean cocktail but she also visits plenty of bars and lounges seeking out delicious drinks her viewers can make at home. Firstly, she and her guest bartender of the day show you how to make their drink of choice. Then each snap story ends with the recipe so you can screenshot it to make later. Genius!

I just discovered this adorable family as they cooked and toured their way through Italy this past week or so. They often travel with their daughter Bailey who also amazed me with her involvement in the kitchen and keen interest in everything. The food, family fun and detailed stories are what keep me tuning in.

A London based food writer with Irish wit, she also makes some amazing looking pork rice cakes the other day! She cooks, she travels and she’s a lot of fun. She offers food tours and cooking classes but I follow her for the amazing food all day, every day!

Cailin is part of the BlogHouse family I joined in 2013 while in Ireland. Although she wasn’t a mentor at the time she has been in recent years and is instrumental in blogging themed Facebook groups setting the bar for videography, Snapchat, and blogging in general. If you’re a blogger and have questions be sure to ask her, she is awesome. But we have something more in common than blogging and BlogHouse…our love of food and travel. I’ve seen her try outrageous milkshakes in Manhattan, devour Philly cheesesteaks in Philadelphia, sip French wines in Bordeaux and cook lobster at her family home in Halifax. Cailin understands the marriage between food and travel so you can expect to see some crazy and classic dishes wherever she goes.

Ketty is French born but lives in Dublin and was just recently named one of Ireland’s Food Champions. She cooks, guides food tours and shows you around her favourite places to eat in the city. Her love of cheese rivals my own! Expect to see a lot of cupcakes, delicious savoury food in her kitchen and delightful scenes of Dublin and the river Liffey. I hope to join one of her food tours this October when my fiancé and I head to the UK for our honeymoon!

An expat from Pennsylvania, Edna’s current home base is Paris but she travels to over ten countries (minimum) per year. She is always trying out street food, the restaurant scene and showing her readers the culture of wherever she is. She’s never dull with all the different places she goes but when she is at home in Paris, she shows her readers different neighbourhoods as well as places to eat and drink. No matter where she travels though, her main message is that no matter what your job or lifestyle, you don’t need to be rich to travel!

@TheBoyWhoBakes
Blog: The Boy Who Bakes

Unlike most of these snappers, I discovered Edd through a recommendation by EatLikeaGirl – she was so right! Little did I know Edd is a television personality across the pond and is currently stationed in Paris for a few days but lives in the UK. He is also the winner of the Great British Bakeoff. His recent snaps in Paris have made me verbally swoon…get thee to his snapchat account asap!

Additionally, you can follow me for food, wine and Canadian fun. This coming weekend it is my birthday so I’ll be taking my viewers on a tour through the Naramata wine bench. It is like Canada’s Tuscan region. I’ll be focusing on the food and unique wineries stationed so close in proximity overlooking the Okanagan lake- some say it is better than Napa and Tuscany! I’ll also be heading to Whistler in July and touring a goat cheese farm! In September/October I’ll also be heading to London, Edinburgh and Dublin for my honyemoon. Eeeeek!