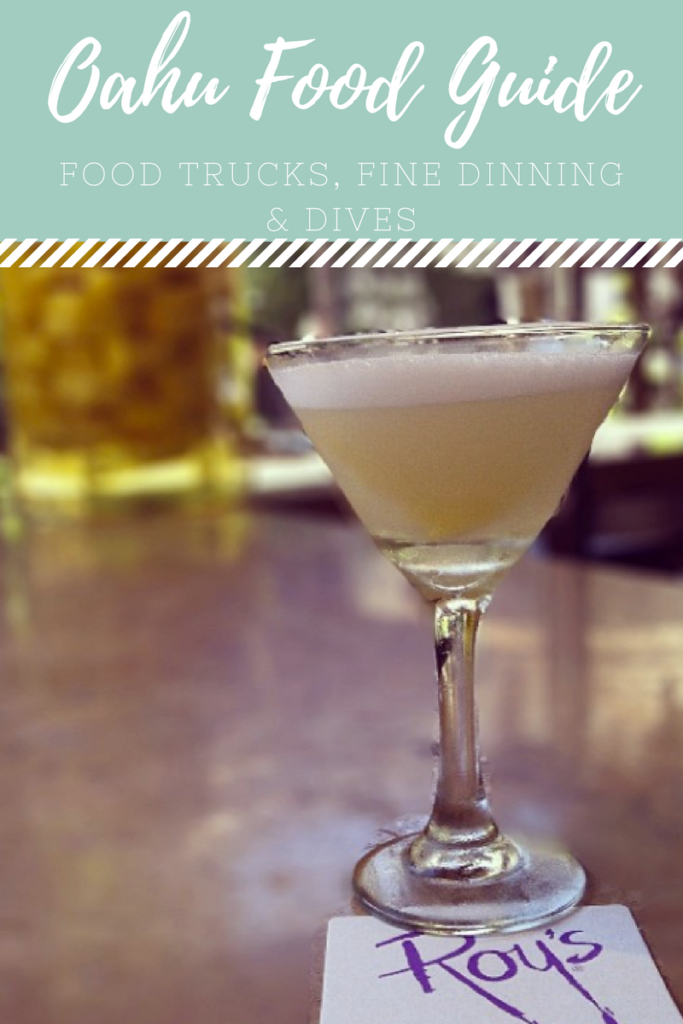 I am a huge fan of second, third and even tenth visits. When I find a place that meshes well with all my travel criteria I can’t help but return. It’s like I become fixated and want to experience everything over again. This can, at times, lead to let downs. I’ve been to Vegas over ten times and I admit I’ve had a couple not so great experiences there but 8 out of 10 ain’t bad.

Oahu, Hawaii has become one of my family’s most favoured destinations to escape the Canadian winter. We gladly exchange Christmas trees and snow for sun, sand and seafood, not to mention a few pineapple martini’s from Roy’s.

Where to eat around Oahu takes some planning, especially during the busy season – December.
During my 4th visit I was determined to experience everything I had missed in the previous visits. This meant every bakery, dive and shrimp truck. I refused to return to my old reliable Giovanni’s shrimp truck and instead opted for something new. In doing so I learned a lot about Hawaii that I didn’t know before from how long one might wait for an order of shrimp or the importance of booking a food tour rather than DIY on island time. So these are the places you should eat but also tips on how to avoid 90 minute wait times if you can’t afford the pricey food tours in Oahu.

If you’re starving after crushing a few waves on the North Shore you do not want to find yourself in the ordering line with 40 other tourists and locals. More importantly, you do not want to find yourself in Romy’s Shrimp line up. I took a chance and it blew up in my face. “The wait better be worth it! If this isn’t better than Giovanni’s Murissa…” my family grumbled as we sat at a picnic table watching storm clouds approaching.
When our food finally arrived my worse fears were confirmed. We should have went to Giovanni’s.
Honestly, and I have local photographer Shannon Sasaki to confer, Giovanni’s is the best shrimp on the island! The difference? It’s taste and quality of the shrimp. Romy’s texture threw me off and some of the shrimp were not cleaned to my satisfaction. Giovanni’s garlic as well as the sweet n’ spicy is exactly what you need after a morning at the beach. So please don’t waste your time experimenting with other shrimp trucks…or maybe you should so I don’t have to wait so long in the line at Giovanni’s next time.

Local Secret: Avoid the line by phoning in your order! This goes for Romy’s too if you’re so inclined to compare the shrimp, phone your order in!

There are so many good bakeries on the island of Oahu and again you can find lineups at all of them. I was starting to realize my plight to try all the bakeries was naïve. Sadly I had no time to go to Leonard’s Bakery in Honolulu but I did get to stop at Ted’s Bakery on the North Shore. Each bakery has their specialty. At Leonard’s their malasadas are supposed to be so delicious. And then there’s Ted’s…

Ted’s Bakery actually has a long history on the island of Oahu. The result of three generations of Japanese immigrants, the original location was opened in 1956 selling groceries. It wasn’t until 1987 when the son, Ted, took over did he start selling baked goods. In 1994 his pies began to gain notoriety as surrounding grocery stores and island chains began to carry his famous pies. With the growing surf capital of Sunset Beach, surfers have flocked to Ted’s looking for lunch plates and sweet treats.

And at Ted’s they are famous for their chocolate haupia cream pie. This is the one location that makes it easy to try their signature pies. You can simply grab a slice or an entire pie from their refrigerator and wait in line to pay – this line goes fast. Voila! Done and done. But if you start to read their menu and get sucked in to trying lunch…that’s another 60-90 minute wait. Of course, I am speaking from experience. With chocolate haupia cream pie in hand I began to read about the chicken lunch plate and the shrimp…I fell for it. A long, long wait later we got our lunch and it was alright but frankly not worth a 90 minute wait. Truth be told, we were so hungry we ended up eating dessert first.
The pies consist of a layer of cream topping, two layers of haupia (coconut pudding), and dark chocolate custard cream. It was delicious and you should stop for a slice since it is so easy to grab and go. Just be sure to bring your own lunch or again, pre-order.

Shave ice is an iconic dessert in Hawaii. Plenty of knockoffs are found all around the island but there’s only one who does it right and you’ve probably heard of them…Matsumoto’s Shave Ice. If you haven’t tried their shave ice before you’re probably thinking that it is the same old shave ice you can get from the carnival – shaved ice with plenty of sugary syrup on top. While that’s definitely an aspect of Matsumoto’s Shave Ice it’s also so much more.

The famous Matsumoto’s lives up to its reputation. With condensed milk, pickled mango and coconut syrups.

First of all you have some amazing flavours to choose from: Guava, lilikoi, pickled mango (so good!), papaya, coconut cream, ramune, yuzu, lychee, white cake and old classics like bubble gum, root beer and pina colada.

Second of all you have additions which are both Japanese and very Hawaiian: Azuki beans which are sweet East Asian beans are boiled to soften then sugar is added to increase the sweetness. Mochi balls can also be added for chewiness and are Japanese rice cakes soaked in a sugar syrup. On top of these options you can also have condensed milk drizzled over the top of your shave ice (highly recommended!) and ice cream as an added option.

There are too many options to name for restaurants that offer a slice of fine dinning with Hawaiian flare. A few of both my favourite and general favourites are: Roy’s Hawaii (located on the Big Island, Oahu and Maui), Alan Wong’s (preferred by the Obamas), Nobu’s for Japanese Hawaiian sushi in all its glorious forms.

But I have to be honest, I usually only go to one of these places per trip and I’ve only actually been to two – Nobu and Roy’s. The third, Alan Wong’s, I am taking my dad’s advice and going next time because he can’t stop raving about their chef’s menu he had after a romantic evening with my mom there. While these places have no troubles attracting all the attention they deserve I want to point out two places that are lesser known or perhaps aren’t as visited so much.