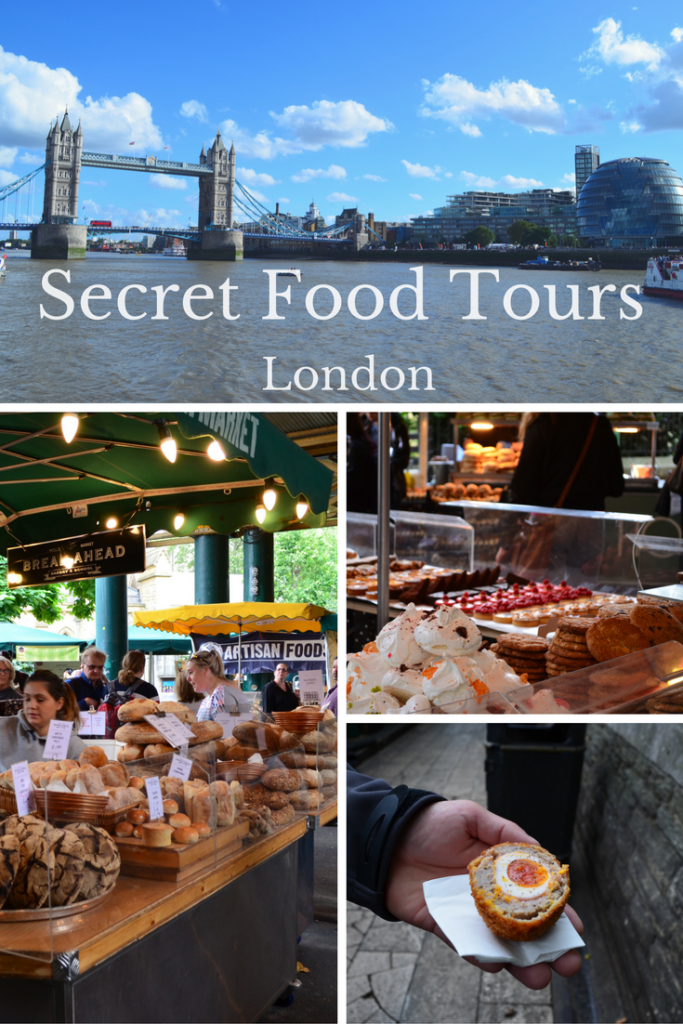 In London decent food wasn’t hard to come by but frankly memorable meals were. At least that was the case for my husband and I on our honeymoon. That is until we went on our Secret Food Tour London featuring traditional British fare in the area of Borough Market and London Bridge.

See the video below:

At first I figured I’d be familiar with everything offered. There would be no surprises from London. From scotch eggs and fish n’ chips to cheese and bread I’ve seen it all. But the tour held delicious surprises and some of the best food we’d have in all of the UK during our honeymoon.

Our first stop was Borough Market. A vast and mostly covered sphere of vendors selling everything from paella to venison burgers. Borough Market as we know it dates back to 1851. However, with it’s location at the foot of London Bridge there has been a market in this location predating the 13th century. A gathering space for all walks of life from tourists and serious men in suits looking for a quick pint. I only wish my AirBnB apartment was nearer for another go ’round the market. Take note, a market is the best source of food so situate yourself in the city wisely.

As a dedicated foodie I have traveled enough to know that in order to really get to know a city a trip to the market is the best solution. Borough Market is one of those places that reveal both the history and evolution of the city and food scene. Our guide and local chef Ed, was able to relay this to us with a most animated passion as you can see in some of the video above.

There was no one taste or preference unattended to and our group was as unique as the variety of vendors. With a manageable group of twelve people aged thirteen to ninety-one it was one of the most varied food tour groups I’ve ever been apart of.

Secret Food Tours is also one of the most unique tours I have been on. Normally there is a strict schedule to adhere to and so the guide usually rushes from stall to stall and shop to shop. In this case we were allotted enough free time to wander around the market on our own. We could indulge in a coffee or freshly squeezed lemonade or wander into a nearby pub for a quick pint.

From the market tastings, of which there were many, we then moved to a hidden tavern where we sat in a dimly lit room for cider and cheese tastings.

And yet is there anything that divides like blue cheese?

To my shock and awe the selection of cheese was most polarizing and it saddened me to leave more than 3 ounces of uneaten cheese as we fled for the next location.

Food tours give such a unique insight not only of the places you’re exploring but also people in general. The less traveled people didn’t want to try as much. They tended to be pickier eaters and refused to give unique and, to them, odd flavours a try. To each their own but the writer in me, always a student of behaviour, began to analyze.

Balancing the feasting and walking, the tour evenly acts as a history lesson:

A stop by the replica of the Golden Hinde II, the boat that circumnavigated the globe with Sir Francis Drake at the helm from 1577-1580.
The gorgeous old 12th century ruins of Winchester Palace that now acts as a garden (see video).
A quick and free tour of Southwark Cathedral, London’s oldest cathedrals with roots dating back to the 6th-7th century.

The culmination of our food tour arrived when we reached London’s iconic leaning City Hall and Tower Bridge. City Hall is the building that looks like a sliced glass orange about to topple over onto its side. And Tower Bridge is the 150 year old bridge typically mistaken for the London Bridge. With the Tower of London, the Gherkin and Walky Talky buildings at our backs (see below) we feasted on sugar coated donuts overflowing with creamy custard. It is said these are the best donuts in London and made by Bread Ahead, a shop that doubles as a culinary school in the Borough Market.

What could be more British than to end with a proper cup of tea?
Just down the Thames towards the London Bridge we popped into Hornimans at Hays, a pub established in 1873 that doubles as a restaurant. The building itself used to be a tea warehouse and is a perfect spot to relax with tea or a pint after visiting the busy market. It also sits along the bank at the foot of the HMS Belfast ship (see below).

Our guide Ed brought over steaming grey kettles of Earl Grey and plates of sticky toffee pudding to share (see video). We all groaned at the sight but despite ourselves we dug in spooning over goops of the coagulating custard. The decadence was washed down by the bitter-sweet tea and warmed our cheeks and bellies.

I wholeheartedly believe that food tours are one of the best ways to explore a city whether it’s one that you’re familiar with or your first time visiting. The market, along with a local guide, helps reveal the hidden history of a city that might not be as apparent on its surface like an old building can be. A market points out where the city has been with traditional foods but also directs you as to where it is going with inventive vendors using local and new ingredients creating new combinations. Food tours are by far my favourite way to learn about a city and what better way than eating to understand its secrets?

Secret Food Tours also has tours in Paris, Rome, Berlin, Barcelona & Madrid. I have my eye set on the Montmartre Secret Food Tour when I return to Paris!

*I was a guest of Secret Food Tours however all opinions, video and photos are my own. This is my honest opinion of their tour and my experience with them. If I don’t enjoy something I pride myself on saying so.