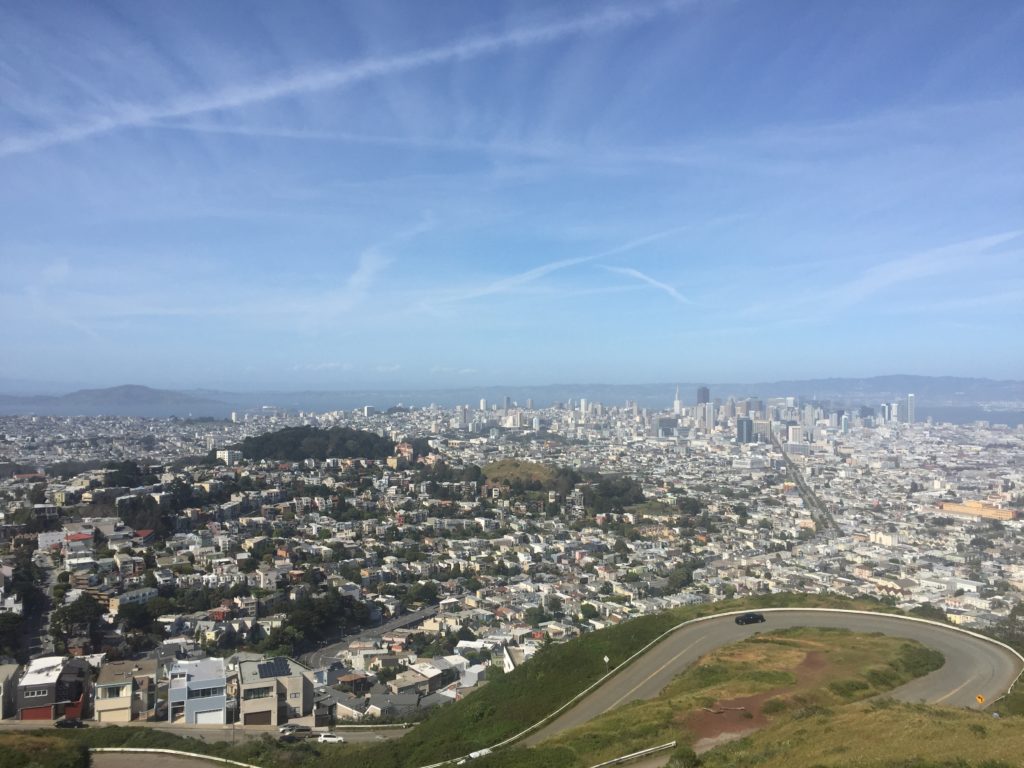 Where do you take someone who has never been to San Francisco before? This was a question that plagued me before my most recent trip to San Francisco. My fiancé and I were veterans. We’ve been over seven times combined and so we have our old favourites and a long list of things to do next time we’re in town. But my sister and her friend were newbies. So how were we to satisfy our list of new to-dos while also showing someone all the must-dos upon one’s first trip?

This trip was especially unique as it was supposed to be a bachelorette party. My fiancé and dad had plans to go out while my sister, her friend Jacob, my mom and I would do a city bar hop on our own. Plans fell through. My mom was sick, dad stayed with her and so a bachelor/bachelorette merged. Frankly, it became another awesome trip to San Francisco but sadly without my mom.

We continued on with our original plans and my fiancé, although at times feeling like he was interrupting, fit in to our reservations for four seamlessly. I am not one for Thunder Down Under types of parties where the tattooed, greased up tries to grind his leather covered unmentionables in my face. It’s a weird situation to be in for either sex in my mind but I know many women and men who might disagree. So this bachelorette was very tame when compared to the typical Las Vegas getaway. There were no strippograms to cancel (to my knowledge anyways), no penis shaped cakes or phallic hats to wear (thank god). It was only a perfect getaway to one of my favourite cities of the world with some of my favourite people.

Three years ago I had one of the best trips ever to San Francisco and it was made possible by my fiancé and a tour company called Vantigo. It was a beer tour that took us beyond the city into Marin and these breweries known for being epically awesome. So I knew I’d have to try Vantigo’s city tour in their classic VW bus named Lillie, named after the “belle” of San Francisco Lillie Hitchcock Coit. In fact, since my first tour with Vantigo they have expanded their fleet to include Harvey (Harvey Milk in blue) and Jerry (Jerry Garcia in yellow).

The Vantigo San Francisco city tour includes an amazing 22 locations with 7 stops over approximately 3 hours. We booked the entire van and even requested a few drinks for the ride which Erik, the founder of Vantigo, graciously provided. Our driver for the day was also new to us, Eddie, a knowledgeable local with a knack for driving a stick while keeping perfect time on the discourse of the city and our questions.

Despite knowing the uniqueness of the Vantigo tours, frankly I thought it was going to be very similar to the hop on hop off tour – it would cover all the spots we wanted my sister and Jacob to see with similar stories that everyone knows, same stops but with drinks in our hands and music playing over the vintage stereo system. I was so wrong.

Chinatown is one of my favourite places to drive/walk through in San Francisco. It being the largest in the world outside of China and filled with both cheesy knick knack shops and tea houses I knew my sister would want to check it out too.

The Mission District is a favourite for Italian food and Beatnik haunts. It boarders Chinatown and is as equally picturesque with murals of beatnik poets who made an impact on both literature and local history – from Jack Kerouac to Allen Ginsberg. If you’re a fan check out City Lights Bookstore where they continued to sell banned books in the 50s including Howl by Ginsberg. Next door is the popular Vesuvio bar where Kerouac decided to ditch Henry Miller in favour for an evening there.

The Golden Gate Bridge is iconic and to not see it would feel like a shame on your first trip, I know that’s what it felt like to me. You have to see it so you can move on to other things, so it isn’t such a big deal on your next trip. Seeing it the way Vantigo shows you the best way. No crowds. Just unadulterated views of the bridge and the Bay at its best.

Sadly, we didn’t have time to go to Alcatraz but it’s so worth it if you have time. Some locals haven’t even made the effort to go but they should. It’s a piece of history worth your time and if you visit it you help preserve it. You can read about my amazing visit to the notorious island here. Instead we did get perfect views of the island on our drive up to Coit Tower and Twin Peaks.

The Presidio is a place I want to spend more time in and was completely new for me despite having gone 4 times! While San Francisco is protected by the Bay, the Presidio is on the other side of the city set against the Pacific Ocean. The homes are so gorgeous, Robin Williams’ old home being one of them, and the views are spectacular. We stopped at Lands End, a Golden Gate National Recreation Area with some serious history. It’s a great place to hike among ruins of the Sutro Baths, check out spots of shipwrecks seen from the lookout and barracks. On your way back into town if you keep going along the road you’ll run into a couple old windmills that act as an entrance to my next new favourite spot…

The Palace of Fine Arts was a wow moment for someone who has been to SF as much as I have. To find this gorgeous scene in the midst of the city streets not far from a touristy spot like the Fisherman’s Wharf, we were all blown away!

Golden Gate Park is over 1000 acres of green space for you to relax away from the city within the city. There’s as much to see and do as you wish or you can grab a couple of beers in any number of secluded lawns to simply relax with friends. It holds a Japanese tea house, 10 lakes, 1 waterfall and even a bison reserve with 6 bison!

The Castro District is San Francisco’s legendary gay neighbourhood. Harvey Milk, the activist and mayor of Castro street where his camera shop, Castro Camera, was located until his assassination in 1978. It is a flourishing district with playful vendor names filled with innuendos –  Skin on Market (dermatology), Spunk Salon, Hortica (garden centre) and more. But the area also holds some of the most popular bars and restaurants in San Francisco. It’s an inclusive neighbourhood no matter where you go. Check out the GLBT History Museum, any number of adult stores, antique shops and gay bars no matter your sexuality!

Twin Peaks was the best way to end our tour. After zooming through the rollercoaster streets SF is famous for we made our way to the highest peak in the city. There we were able to get perspective of just how small the city really is and yet with all of these unique little cultural districts within it, understanding that San Francisco is an immense city filled with great history and people.

Want to book a Vantigo Tour? Consider booking with my code through my resources page.