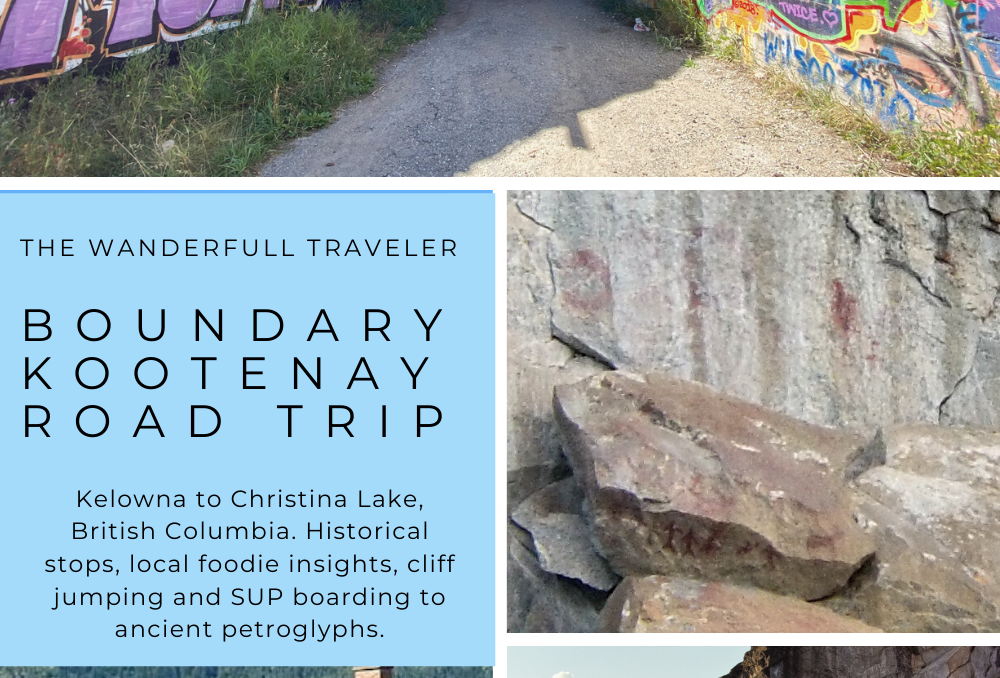 Road trips seem to be all the rage this summer. More locals are getting out for staycations in order to explore their own backyard all over the world. Our family was no exception this month as we packed up and headed out to the Boundary Kootenay road trip to visit with family in the Grand Forks area.

I’ve lived in 4 towns within British Columbia so far, one of which was Grand Forks. I lived there during 4 formative years of my life from the age of 13-17. I wasn’t thrilled to move there leaving all that I knew in Prince George as a teen. It didn’t help that my first month of school began as the trade towers and the chaos of 9/11 took place. It was a confusing time.

Like most teens that move to a smaller town I struggled and resisted my new home for at least a year before I found friends that had mutual acceptance for me and my outsider status. Maybe they accepted me because my resistant to place wore down?

Grand Forks is also where I met my husband. Where the seed of culinary passion was encouraged (unbeknownst to me at the time). Its history and culture was intimidating as a kid who grew up in a multi-cultural centre of Prince George. Jamaican, Indian, Greek, Italian, and many more cultures made life delicious and colourful up north…maybe this is REALLY where my food passion rooted?

Meanwhile in Grand Forks – a quick Google search revealed – its population was predominantly white with remnants of Russian Doukhobour settlers. Elders still spoke/speak Russian, especially in the presence of an outsider. My Grand Forkian friends were largely vegetarian (or vegan before it was a trend) as practicing Doukhobours. While this wasn’t typical of all the kids in school – I gravitated towards the “outsiders”, although I saw them more as insiders – it was understood that they hailed from a more “radical” extension of Doukhobor group…although that is another argument and topic entirely. I liked this group of gals who didn’t put too much value in what the cool kids did nor thought – although I continuously tried and failed to be as self-assured.

A post shared by Murissa • Travel For The Food (@wanderfulltraveler)

They revelled in simplicity and made the most delicious Russian dishes. I always requested we go out The Borscht Bowl, a small town institution that still reigns even during the pandemic. I remember lunch breaks of Voreniki (potato dough perogies) and Pyrahi (pictured above) – the cottage cheese filled only! – smothered in melted butter.

So today going back to Grand Forks is really bitter sweet. We visit my husband’s family – who also have Doukhobor roots but with less conviction – with my 2 year old.

As we drive through the town of 4,000 pangs of painful and happy memories haunt me. Locations of embarrassment, heartbreak, drinks, tokes, fights , laughs, terrible decisions unveil themselves like taunting ghosts. Wounds that were presumed healed are exhumed. These recalled moments – only known to those who know – remind me of the first nations’ petroglyphs at the foot of Texas Point at Christina Lake. A memory of a time that existed but Canadian history books tend to forget.

Christina Lake was one of those places I escaped to as teen in summer. Only 15 minutes from Grand Forks, it is the warmest tree lined lake in Canada. This particular trip I wanted to make the pilgrimage to Texas Point, a hidden cove area famous for dangerous cliff jumping and camp grounds filled with Washington vehicle plates. To the few in the know it also adorned petroglyphs left by the Sinixt First Nations group (the Arrow Lakes people).

For me this tiny area of the lake was my heaven. My friends and I would head to the lake, armed with deep fried mushrooms and a chocolate banana milkshake from Kool Treat, we’d grab a little beach with a view of Texas Point. Some local boys would bravely (or idiotically) climb the rocky cliffs to the top,  then would slowly lower themselves to the elephant’s trunk (the pointed cliff in image above). It could take hours for them to muster up the courage to jump. And rightly so. Some have injured or even died doing so.

I was more there for the swimming as it was much warmer than both the Granby and Kettle rivers in Grand Forks. I also loved to gaze at the ancient carvings by the First Nations’ who passed through. I am very excited to have created a video for you to see. There’s not much about them online which is a shame. Many locals looked perplexed when I mentioned my plight to see them.

Perhaps foreboding my future degree in art history, I found the recordings of deer – maybe moose – fleeing the teams of hunters. An unusually large carving of a man when put in perspective of the others. One carving looks more like a fossil of an ancient flounder with appendages. It sends the imagination reeling which is why I enjoyed it so much as a teen looking for escape, waiting for this temporary life to be over and a new one to begin in Kelowna at UBC Okanagan.

Boundary Kootenay Road Trip Stops along the way from Kelowna: