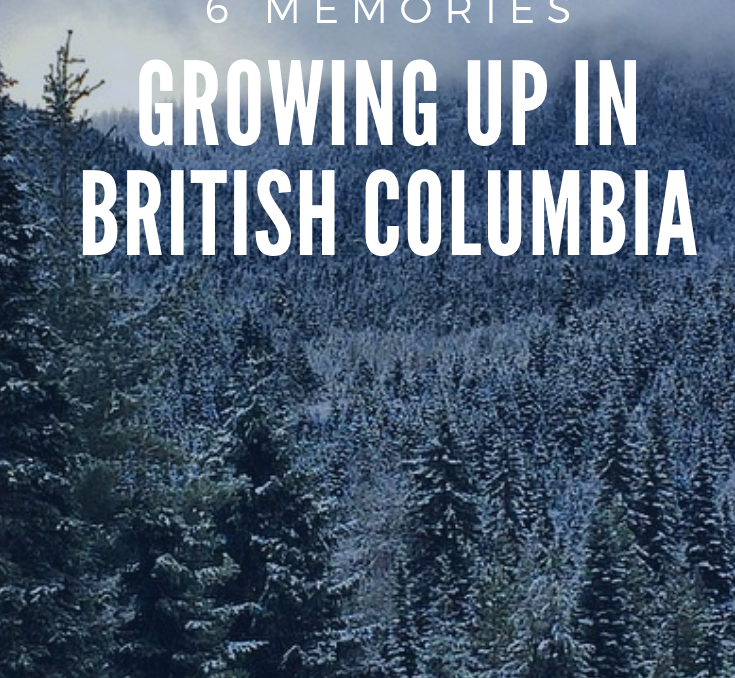 I’ve been writing this blog for 8 years which means there are plenty of lingering and unfinished drafts. I began this post 5 years ago and just never felt the urge to hit publish..until now.

Everyone in BC has one or more bear stories to tell. Living in BC you have to have some appreciation of nature or at least a respect for it. And you know not to mess with a bear. A lot of the time you’ll find them in your back yard or garbages looking for food. Other times it can be within the forest as you to a road trip to the Coast or up North.

fortunately, both bear stories I have are when I was little and didn’t even see either bear. I just remember my dad, stopping to take our dog out for a quick bathroom break along the side of the road. We were headed up North towards Prince Rupert on one of my dad’s sales calls. I remember sliding out of the back seat of the truck stretching my legs before we took off for another four hour stint of driving.

“Get in the truck!” I heard my dad yell. He yanked our small Shitzu by the collar into his arms and ran for dear life. We sped off. The bear, as my dad saw it, was sprinting for us!
Another time we were walking up to UNBC in Prince George to get a view of our city. A truck stopped along side us to warn of a bear not far up the road heading down towards us. Luckily the truck offered to give us a ride back to our cars just in case us kids were a bit too slow for escape.

Canada has over 2 million lakes! If you’re not near our ocean borders, then you’ve most definitely been to one of our lakes. British Columbia is home to some of the most beautiful lakes. As a kid I lived in Prince George and we’d often head to the lake for a camping excursion or a beach day seizing the hot weather during our short seasons.

Then, we moved to southern British Columbia where the summer months and hot weather last a little while longer. Christina Lake is by far one of the best lakes in our province. The warmer waters and surrounding cliffs make it a favourite for swimmers, boaters and cliff jumpers. I also loved to swim out to the pictographs at Texas Point before climbing smaller cliffs to jump from.

4. Getting to Know the Ogopogo

Does anything capture a child’s imagination like a mythical sea monster from the Ice Age? I still stare out at the water on drives along the Okanagan Lake in hopes of spotting the serpentine creature where locals have claimed to have seen its snake-like body and horse head. Its origins are from the local First Nations’ folk lore  and it is know as the N’ha-a-itk.

I remember my mom reasoning how the Ogopogo was a myth but my dad always being the one who placed a small seed of doubt with stories of a boat crashing into what was thought to be an egg near rattlesnake island. Each year there seems to be a renewed interest with reported sightings. This year the Ogopogo was supposedly spotted in the Skaha Lake area by a father watching his son on his paddle board.
You might be wondering how a lake monster can travel from one lake to another but here in the Okanagan rumour has it that all the lakes in the area are connected.

3. All The Islands: From the Gulf Islands to Haida Gwaii

British Columbia has so many islands, too many where you couldn’t possibly visit them all unless you had your own marine boat. From the Gulf Islands to the Queen Charlottes, when you visit these places it feels as though you’re on another continent far away from Canada. Colourful star fish, sand dollars, crabs, ship wrecks, decaying totem poles, all give an ere of magic realism but that biting coastal Canadian cold brings you right back to the fact that you’re indeed still in your home country.

I remember my first trip to the Queen Charlottes (Haida Gwaii) expecting a big city, like BC’s capital, Victoria, on Vancouver Island. A six hour ferry ride took us from Prince Rupert to the island where we found dense forest. It is an island where its inhabitants are outnumbered by wildlife and the sense of remoteness is palpable. My family and I were at first disappointed. But then we drove around stopping at beaches filled with sea life and small local shops where we were warmly welcomed. The landscape captured my imagination where the dense forest would be determined to run over into the sea if it weren’t for the rocky beaches.

Quality salmon is a big part of British Columbia. Walk through our airports and you’ll find souvenir boxes carved in First Nation style with salmon, boxed candied salmon and smoked salmon. Buy first nations salmon earrings, necklaces and hats. Step into a restaurant where you’ll inevitably find one version or other of a salmon dish – my favourite being salmon burgers or my mom’s brown sugar soy salmon.

But we are lucky because we also get to see the salmon run as they make their way from the Pacific Ocean up rivers and streams to spawn. Their bright red skins make them spottable from bridges, river cliffs, trails along neighbourhood streams.
During the salmon run the rivers truly run red and is a sight to see as a kid.

British Columbia is famed for its mountains. Albertans and those who live in the Prairies cower at the thought of driving through our mountain passes (well at least my prairie family members do). But for us British Columbians mountain landscapes are commonplace but also necessary. I wouldn’t feel comfortable in wide open spaces for long – there’s simply not much to look at…nor sled down!

I remember being a kid in Prince George where my family would gather at bases of mountains or huge hills to toboggan down. We’d assemble with our circular saucers in our favourite colour, our GTs, our crazy carpets and climb as high as our little legs would take us in the deep snow. Anticipation would seize some earlier than others. Without a second thought we’d hop on our varied contraptions and zip down the mountains secretly hoping to hit a naturally made jump. If not we’d make one and we’d dangerously launch ourselves off icy ramps until someone was hurt or hunger overcame us.

Grew up here or maybe you’ve traveled to BC?
What is a distinct BC memory you have?
Share in the comments below!