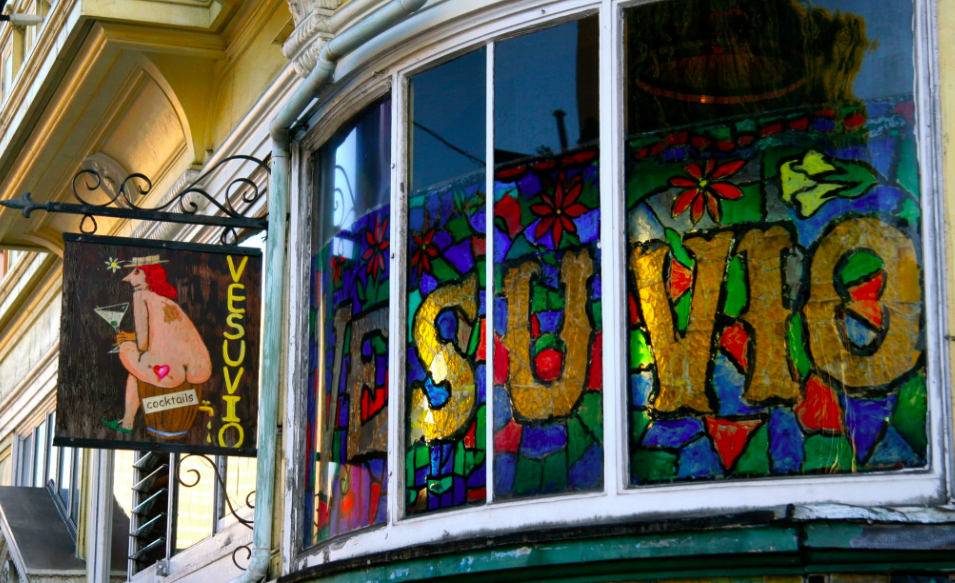 Jack Kerouac inspired my first published poem.
In second year creative writing we had to select a poet to mimic.
We needed to learn what fueled their craft, where they hung out, with whom they hung out with. Were they rebels against society? Did they break the rules of writing, cultural norms, dabble in drugs and live to rue the day?
So I dove in head first and found myself intrigued, like so many others, by the Beatnik lifestyle and especially their love of travel whether it be from Big Sur, California or to Paris. I’d even like to think you can blame Kerouac for my tendency to write long lyrical run on sentences.

So when I left for San Francisco, Kerouac Alley was #1 on my list. I had been before but just in passing and failed to venture down the alley. This time I had to return the love even if it was conveniently at an old watering hole of his. My first stop, after tea tasting in Chinatown, was Vesuvio. In this very eclectic bar Kerouac supposedly avoided meeting Henry Miller and instead decided to drink…a lot.

The bar today is in a time warp. It is a mess but not as if a hoarder owns it. More like a first draft poem that you and your inebriated friends took turns writing. It’s perfect chaos. You can even find some poetry on the walls in frames, old posters spreading the word about a reading and photographs of mystery people. It’s charming and has a lot of surprises if you take the time to look.

The stained glass chandelier is still lit by flickering flames fueled by gas. The posters and photos pasted to the walls are faded and muddy like memory. Without the understanding of Beatnik culture  you would never forgive the dive bar service. Not that the bartenders aren’t friendly but they have this ere that they are true lovers of Kerouac and the Beatniks. You’re just looking in like it’s Disneyland so purchase a t-shirt while they live it and serve it for life. Or at least the duration they work there.

After a few vodkas I decided to move next door to City Lights Bookshop. This is the sister book store to Paris’ more famous Shakespeare & Co. Both owners were friends believing in the freedom to publish/read what they chose and freedom of speech while society was trying to sweep those on the fringe, including the Beatniks, beneath the carpet.

Kerouac’s friend, and perhaps even bedroom acquaintances, Allen Ginsberg is a perfect example. After writing Howl, one of my favourite long poems, a court case soon arose after its publication due to the descriptions of gay sex and subjects described as profanity by a society that valued conformity. During the court case and the effort to censor artists like Ginsberg, the owner of City Lights, Lauren Ferlinghetti took a stance and continued to sell Howl. Howl was first performed in its entirety (and written) in San Francisco in 1656. Shy Kerouac was there panning the crowd for donations for the event. The funds were used to buy wine for the poets. You see why I like them so much?

During my admittedly buzzed stop at the City Lights Bookstore I immediately found a charming little nook with book shelves filled with handmade chapbooks of poetry. It’s also a great spot to find unique books for those je ne sais quois tastes. For example, my sister is an avid fan of comics and was treated to a book filled with horror comic book covers that were censored by the government.

It’s a place of inspiration for writers, travelers and creative folks to read, meet and exchange ideas.
I’ll never actually “find” Kerouac other than on his published pages of course but it was fun to walk (and drink) in his footsteps for a day.