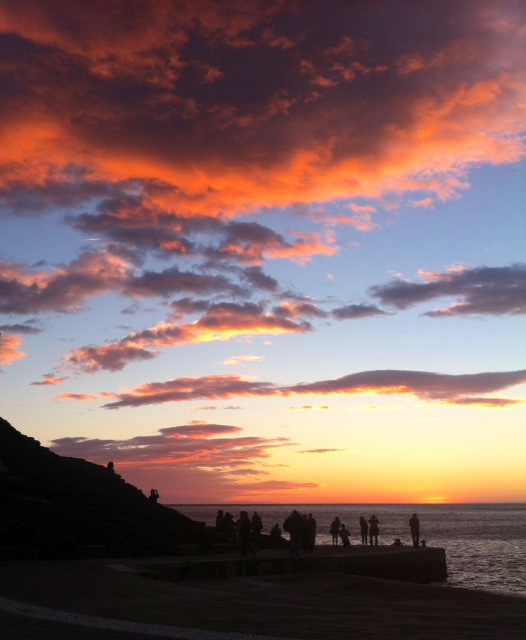 Fellow Okanagan blogger Laura of The Culinary Travel Guide recently reached out to me about an idea for a new series she dubs Style Files. Laura has been sifting through chefs, travelers, bloggers and general foodies asking them the important questions in life….where & what do you love to eat?!

After taking her Q & A myself I asked Laura, how about you answer these questions for my readers too? She kindly agreed and I learned more about her than I did at a recent lunch we had at our local yacht club.

Laura and I are kindred spirits, no only do we both enjoy the occasional spirit or two in Las Vegas and Venice, Italy but we also have a passion for food and travel. I introduce Laura of The Culinary Travel Guide. Be sure to follow her adventures!

Hometown: I was born in Hollywood, California

Residence: I live in Kelowna, BC

How would you describe your travel style?

Affordable luxury. If I had to choose between 2 nights in a 5-star or 5 nights in a 2-star, it would be the easiest decision I’ve ever made. 5-star all the way. On longer trips I like to rent an apartment with a decent kitchen and a washer/dryer.

When the Buckaroos traded my Dad to the Black Hawks when I was 5, my parents loaded five kids and a neurotic poodle into a wood-panelled station wagon and drove 1700+ miles from Portland to Chicago. To make the trip as quickly as possible, they drove continuously, switching off every four hours or so. As soon as night fell, they would pull into a rest stop, fold down the back seats, and line us up like sardines in a tin can, then hit the road again. To this day, I love falling asleep in a car, as long as I’m not the one driving.

When researching travel destinations, how important are food/drink choices and experiences to your overall decision-making process?

I rarely choose a travel destination because of the food and drink choices and experiences, although they always influence my wish to return (or not). Cuba is one of the prettiest islands I’ve ever seen, but the food was so bland that I don’t think I’d go back even if the trip were free. Now that the U.S. is relaxing it’s foreign policy, I’ve seen a lot of tour companies offering culinary vacations to Cuba and I’m not the least bit tempted to join them.

Once I’ve decided on a destination, however, I spend an enormous amount of time researching the local food scene.

Culinary traveler or food explorer? Which do you identify more closely with?

Easy question. My website is called The Culinary Travel Guide for a reason.

When I think of food explorers, I think of Anthony Bourdain or Andrew Zimmerman and their quests to eat the wackiest food they can find. I’m not the kind of girl who’ll eat scorpions on a stick, or pig’s brains, or half-formed embryos. I like my cuisine authentic and am open to trying new foods, but I have my limits.

If we ask your best friends if you’re a foodie, what would they say?

I recently read an article that proclaimed it’s time to flambé the word foodie, citing it as over-used and offensive. I guess it really rubs some people the wrong way. To me, a foodie isn’t someone who’s snobby about food. It’s someone who’s passionate about it. It’s no different from calling an athlete a jock. It’s just a food philosophy that’s the polar opposite of eat to live.

What’s in your carry-on? Any essential food or kitchen tools you won’t leave home with out?

Mostly electronics – iPad, iPhone, Macbook Air, camera, chargers, adapters. The only kitchen tools I pack are a corkscrew and a bottle opener (and one could argue those aren’t necessarily kitchen tools) but they go in my checked baggage where I know they won’t be confiscated by airport security.

Yak. Or maybe crocodile. Have you ever noticed that if you ask what food you’ve never eaten tastes like, the answer is always chicken? Don’t believe it. Crocodile does not taste like chicken.

If we handed you a ticket to anywhere in the world, where would you go?

If you handed it to me in 2014, my answer would have been Greece. Santorini and Mykonos have been on my lust list for as long as I can remember. All that gorgeous scenery paired with a distinct and historic food culture. Heaven.

Recently though, I’ve been thinking Vietnam or Japan. Since I started running the Style File interviews on The Culinary Travel Guide, I’m swayed by the answers of folks that are far better travelled than me. Asia, and Japan in particular, keep coming up over and over.

What’s the best culinary travel experience you’ve ever had?

My best culinary travel experience was one that put me way outside my comfort zone. It was at the Ecole Ritz Escoffier in Paris where I was the only English-speaking student in a class of French speakers. Chef David (a very colourful character!) spoke rapid-fire French while his assistant, Sophie, translated for me. At least in theory. The reality was a bit different. Chef kept her busy doing a million other things – setting the table, uncorking wine, fetching things. To complicate matters, the class was quite advanced. This was the Ritz, after all, the epitome of haute cuisine. We cut potatoes into tournes, prepped ‘yesteryear’ vegetables, butterflied guinea fowl, made puff pastry, and created a silky rich crème anglaise.

Surprisingly though, the language barrier dissolved faster than a bouillon cube in boiling water. So many cooking terms are French in origin – julienne, sauté, soufflé, flambé – to name a few (even bouillon). Plus the chef demonstrated each technique.

The other students were all so friendly – and enthusiastic! There was not a shy person in the room. When the chef asked for a volunteer to try a particularly challenging culinary feat, people were nearly knocking each other over as they raced to his station.

Once we had finished with the cooking, we sat down to this incredible feast fit for king. We ate on plates rimmed in solid gold. Drank bottle after bottle of exquisite wine. Shared laughter. Even though I had no idea what we were laughing at (it could have been me for all I know) I laughed just as loud as everyone else. It was just the best day ever.

In North America, our food madness began in the early 1980s and has built to a feverish pitch ever since then. The French, however, have been at it for centuries. Even Marie Antoinette was a foodie.

Favorite Restaurant: Mon Ami Gabi in Las Vegas. The food is great but it’s really the patio that puts it over the top. I can sit there for hours, eating steak frites, watching the Bellagio fountain show, and the never-ending stream of party-loving tourists.

Favorite Street Food: Gelato. I ate it every day when I was in Italy. There was one day I ate it twice. Gelateria Cinque Terre has the best!

Favorite Food/Tasting Tour: Taste Florence: Where Eating is an Art

Don’t miss a post by signing up for my newsletter here.