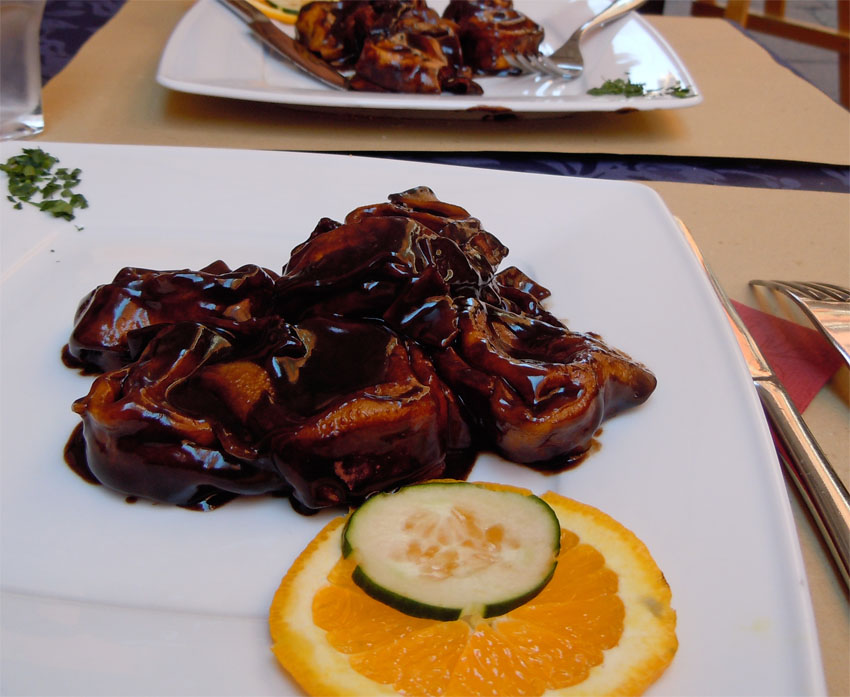 Anthony Bourdain’s recent blog post about the life altering food he experienced at a Spanish restaurant (that usually has at least 4 million requests for reservations) has inspired this post. Unfortunately Bourdain’s restaurant, El Bulli, is closing down for good July 31st. Bourdain made it clear that this restaurant featured the best food he will ever have in his life, which is saying something coming from a chef and fellow world culinary traveler. However it was also clear that what was important about this place was where he ate this amazing food.
His bitter-sweet post made me recall my ultimate meal, the one I always think back to and my mouth begins to water and I end up looking up flight tickets or photos just to remember eating that dish once more. For me, this dish can only be found in Bologna, Italy.
I arrived in Bologna, with a group of penny pinching University students, not knowing what I was getting into. I had read that Bologna is considered the food capital of Italy and so I wanted to be particular with the food I ate. I wanted to get a taste of this amazing Italian food that yet to try. We arrived by train from Verona, where we were staying and making our own make-shift Italian meals. This really killed me. I felt it was so ironic that I was making my own food in a country that makes, what some think, to be the best cuisine in the world. So when I arrived in Bologna, I was determined to find a nice sit-down restaurant where I could get a taste of what would be my best meal in Italy. This was more difficult than I thought
Our schedule for the day was tight; filled with the Anatomy Theatre, San Petronio Basilica, Palazzo Poggi and then finally a quick stop at an art gallery/museum of which I cannot recall the name. Luckily we had an hour to eat in between and I underestimated the attitudes of hungry women, while overestimating their budget and desire for a great meal.
Our breakfast consisted of a lovely chocolate braided pastry, however, with a day like my Bologna day, I needed more than this to satisfy my hunger for THE great Italian meal I was searching for.
San Petronio Basilica
After visiting the Anatomy Theatre, where many of us felt dizzy with the talk of dissecting human bodies while in a stifling hot room made of pine, we determined lunch would be the solution. We wandered around the old streets that were peppered with graffiti about, from what I could tell, Fascism. Our professor let us know that Fascism is alive and well in Bologna, and so were the pickpockets (hold your purses close even at the church). Luckily, I avoided both.
The group of girls I found myself with were equally as hungry as I, however, when I saw a potential orgasmic culinary creation, they saw Euros flying out of their pockets. To add to the differing tastes, we also had a vegetarian to accommodate. After a few times of thinking I have found it, they weren’t as keen. Finally, I decided to pick a place and sit, even if it meant dinning alone. The annoyance was obvious and palpable between all of us. We had arrived at a restaurant called La Clavature, and we sat outside in the charming streets with the sun, giving our feet a rest and wiping the sweat from our faces. The sickness from the Anatomy Theatre mixed with the crankiness of hungry women tainted the atmosphere. I was no expecting to find THE best meal, just one to satisfy our hunger pangs and make us all like each other again.

The waitress, who also seemed to be the owner, could not have been more friendly and to thank her we had convinced many of our classmates who passed us on the street to eat at La Clavature as well. Her restaurant was packed and to thank us she gave us all Tiramisu on the house. It was the best meal in Italy. And as for our vegetarian friend, she too received a delectable spinach cake with balsamic drizzle. It looked surprisingly appetizing, however, my pumpkin tortellini was perfect. The pasta was fresh, which you can easily tell by the firmer texture. The pumpkin stuffing with ricotta was melt in your mouth good. Most of the time I find many tortellini or ravioli fillings end up clumping together in such a way that you cannot tell what you are eating. This was no the case at La Clavature. The Tiramisu was also the best I had in all of the 11 cities I visited in Italy.

Bologna was a treat in more ways than culinary. The city offered so much for the eyes to devour, in particular, Palazzo Poggi as well as San Petronio Basilica. Bologna is centrally located which makes it great for day trips from Verona, Venice, Florence, etc. (Be sure to stay tuned for future posts of Palazzo Poggi as well as the amazing San Petronio Basilica!)
While this meal was amazing, I do expect it to be topped eventually; perhaps this summer in Naramata, Seattle, Vancouver, Los Angeles or Las Vegas. But it will forever be immortalized in my mind for the best dish I had during my first trip to Italy.
Do any of you readers have that one meal you will never forget?
And if so, where?