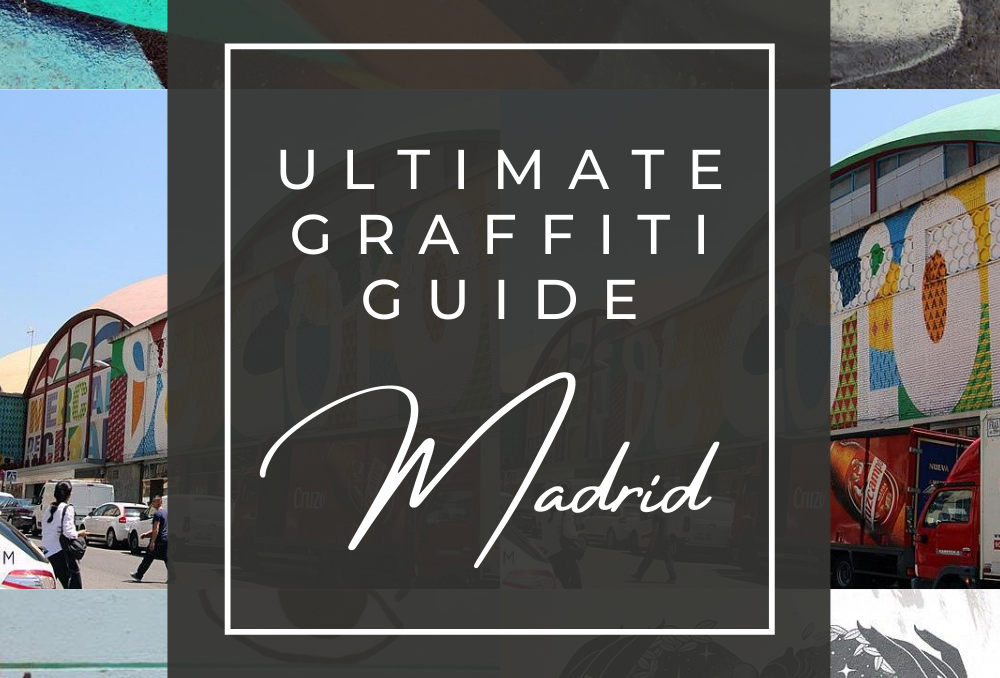 Looking for a local’s ultimate graffiti guide to Madrid? Juliette of Discovery Madrid has the details so that you can conduct your own DIY tour of this gorgeous Spanish city’s streets.

I am no stranger to art and graffiti. As a student of art history I followed the rise of street art as well as graffiti in connection with various social and cultural contexts. I even discovered a Parisian walking tour of my own by accident which you can read about here.

Thank you for your contribution Juliette!

Madrid is a cultural and artistic city where you will find all types of street art and graffiti with painted, tagged, sprayed or even pasted scenes. Its streets are full of painted walls and especially in the Lavapies and Malasana neighbourhoods. Art in the city expresses itself in many ways with paintings, urban art with atypical benches but also by using recycled
materials.

What’s the difference between street art and graffiti?

You can’t begin a guide to graffiti in Madrid without understanding its context. Graffiti is a certain form of art which aims to represent symbols in order to spread a message or an idea, their goal can take many forms. Nowadays, it is often depicted as something negative but in fact, it is a really beautiful kind of art, you just need to understand its meaning. Graffiti is used in public places, in the streets and drawings are tagged on the walls or even on the floor in order for the artist to let everyone know what he thinks, it is a certain way of freedom of expression, but graffiti is an illegal type of art. On the contrary, street art is a legal kind of art used by the artists in order to sell their work and be known. They also tend to spread an idea, a message but it is not as spontaneous as graffitis.

Pinta Malasana is like a marathon organised in the city during summer, where more than a hundred artists met to paint the Malasana neighbourhood with more than a hundred new street art paintings which gave a very new face to the borough. It is a totally free activity
where not only street art is represented but also different kind of art such as photography.

Workshops are also organised to help people paint and learn new techniques, all thoseactivities are completely free. It is a great activity to do when coming in the city to discover it
in an uncommon way.

Another graffiti which can be found in Malasana is called “Respira” and there is another one called “Ama” which is designed following the exact same style. This black and white painting is shaped in a heart and we can see a bird spreading his wing, hands taking care of the
heart and a diamond in the middle. We can say that this work of art was made in order to preserve the environment and that we need to take care of it. Other similar paintings were made by the same artists called Boa Mistura and are called “Firmeza” represented with a fist in the air, maybe to protest and talk about the freedom of expression. Another one called
called “Mundo” reminds us that we need to preserve and protect the environment.

This place was previously known to host the tobacco company Tabacalera. It is now used or more precisely its walls are now used by artists to spread their ideas, to develop their talent and expose them to inhabitants and tourists. You will encounter this place in the streets called Miguel Servet and Meson de Paredes of Madrid. Every year, new walls are painted by
approximately 25 artists and a new theme is set up. An indoor version now exists which is called Intramuros and helps artists and fans to meet in order to discuss this kind of art, exchange their ideas, knowledges and techniques.

This street art festival is the biggest one in Madrid and takes place in the Lavapies borough. Artists and shops owners come together to help develop this kind of art by letting their walls and storefront painted. The goal is to help new artists to emerge and gain visibility in order to be known. They can create whatever they want, in a spontaneous way and let their creativity express itself.

The turquoise wall of Malasana

You can’t have the ultimate graffiti guide to Madrid without the turquoise wall of Malasana is located in the Calle de La Palma and is the front store of the Tom Pai shop. It is a wall painted in turquoise on which the artists decided to represent eyes, looking in every direction. This place is a very Instagramable one and really looks good on pictures, but can be a bit disturbing when you really look at it.

The market called Mercado de la Cebada is a very simple and normal market from the inside, but when you look at it from the outside, you will be able to discover a completely different face from this place. The artists who are at the origin of this beautiful work of art is again Boa Mistura, a very talented and appreciated group of artists in the capital city. In fact,
Boa Mistura is composed of various artists who aim to spread their art all over the globe such as here in Madrid but also in countries such as Germany or Brazil. Those paintings on the market are very colourful, making this place more dynamic and attractive, it gave it like a
second life. The different colours on the roof are used to remind us of the different products sold in the market. This group of artists aims to spread optimism to the inhabitants and is now creating a dynamic and attractive area in the inside of the market.

This ultimate graffiti guide to Madrid was provided by Juliette Smith of Madrid Discovery
Passionate about travelling. I’ve already been pretty much everywhere in Europe and experienced different travelling types from backpacking to luxury tours, leisure and adventure. But Spain is where my heart is!