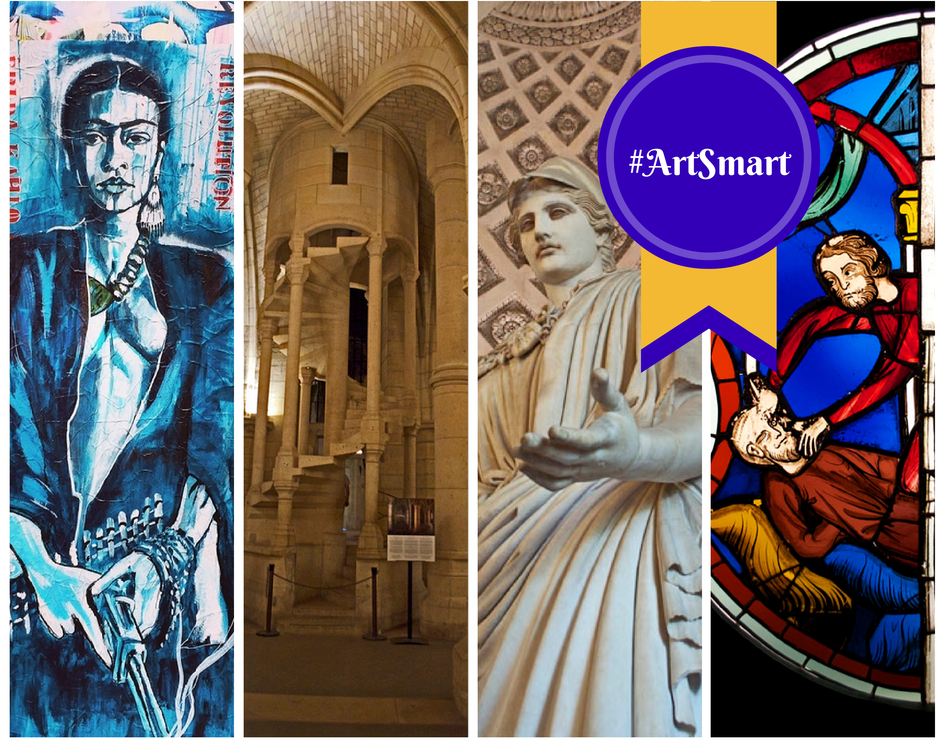 This month the ArtSmart Roundtable theme is “An Art Day in…” and having just returned from my first time in Paris I have plenty to write about. Almost every day was an art day in Paris and much of it was unexpected, unplanned and unreal.

If you’re new to ArtSmart it’s a group of passionate travel bloggers who cover a variety of topics but we all love art. We publish on the first Monday of each month with a new topic and you can find links to my colleagues’ interpretations of this month’s theme at the bottom of this post.

Sigh…Paris. I was surprised at how spread out it is but at the same time it isn’t. The Louvre, Notre Dame, Musé D’Orsay, Centre Pompidou, Place des Voges are all within walking distance if you’re feeling vigorous. Otherwise there’s all linking metro.

I took the metro when I needed to but stuck to walking within my area. I stayed in the Marais (3rd & 4th arrondissements) and would walk to the Notre Dame at least once a day. The Eiffel Tower is visible from there but is much farther than what it appears – about an hour walk or a 15 minute metro ride from Notre Dame/St Michel metro stop.

Luckily I was staying in an area that wasn’t too far from the popular art galleries and museums that were on my list and unexpectedly ran into those that should have been.
Below is a walking tour that you can take at your own pace or be like me and simply take your chances and run into them. It was like a game. Let’s go into the next museum or art gallery we walk by. The most unexpected gems await you if you tour Paris like this. Throw caution to the wind like a Parisian waiter flicking his half smoked cigarette into the morning air.

My only rule: Buy a Paris Museum Pass!

This little pass enables you to skip the lines at the Louvre, Centre Pompidou, Conciergerie and many more. I opted for the 4 day pass knowing that I didn’t want to rush too much and that one of those days would be used at Versailles (the pass acts as your tickets for all areas of Versailles). If the pass doesn’t interest you I would recommend pre-purchasing your museum tickets to avoid lines.

It being my first time to Paris I was completely open to the fact that I wouldn’t be seeing everything that I ever wanted or dreamed. There just wasn’t enough time. But I did see exactly what I needed.

I would start each day by walking from the Centre Pompidou which was near my GowithOh apartment rental.  From there I would decide wether I wanted to go towards Notre Dame and into the St Germain/Latin Quarter or completely get lost and go left or right.

For this tour head to the Louvre after breakfast. While a full tour would not be recommended I would suggest exploring the one area that mosts interests you then return on another day to see more. To see all of the Louvre would probably take a month so for me I stuck to the Sully and Denon wings which included the ancient moat dug up during the 1980s, Mona Lisa, Canova’s Psyche and Cupid, paintings by Ingres, Michelangelo, Jacques-Louis David and the list goes on. It took about 3 hours to see the works I really wanted to then moved on.
Remember that you can return and skip the line with your Paris Museum Pass enabling you to explore at your own pace without having to cram it all in.

From there I roamed across the bridge to the Cluny National Medieval Museum. This was not a place I planned on seeing but I found myself standing right outside the museum asking myself why not? I was pleasantly surprised. Again, the pass enabled me to skip the lines.

The Cluny holds the world famous unicorn tapestries but also the stolen heads of the 28 Kings of Judah from the Notre Dame de Paris. During the French Revolution the heads of each sculpture were taken off by the angry mob mistaking these kings for those of France, not the Biblical kings of Judah. The heads were buried for safe keeping and unearthed in 1977. Roman baths, ornate ivory carvings, altar pieces and an impressive display of 13th century stained glass from St Chapelle are all on display.

After about 2 hours in the Cluny I moved on back towards the Notre Dame on the île de la Cité. I liked to imagine the French revolutionaries remove the heads of those 28 kings – how did they do it? Chisels? Saws? How long did it take them? Did they ever learn that the statues they defiled were not images of the French kings but of the Kings of Judah?

From there I made my own personal pilgrimage to the Conciergerie to see Marie Antoinette’s holding cell before she was guillotined. Again, the pass came in handy allowing us to get in quickly, explore for about an hour before moving on. The Conciergerie is mostly a marvel of architecture as it is the oldest remaining royal palace in Paris, contains an exhibit explaining the events leading up to the French Revolution in 1787 and holds a list of over 2700 people who were held at the Conciergerie and then guillotined from 1787-1789.

After the Conciergerie head to the Place des Voges to relax. You can enjoy a glass of wine beneath the arcades, refuel and people watch those venturing to the park. You can also stroll through Victor Hugo’s home for free (10am-6:00pm). Unfortunately they are closed on Mondays so I didn’t get to go in. But that didn’t stop me from snagging a few images of the area and venturing through every open doorway that looked inviting and resting my feet when I could.

End your evening at the Centre Pompidou. After all the ancient art you’ve seen a more modern take will help you refresh your eyes. With your Paris Pass you can get in after the gallery closes to the general public. The top floor hosts perfect views of Paris and a swanky restaurant awaits.

This certainly is a full day of art and if it’s too much you can easily edit it to suit your own speed. I found myself having a free day and doing everything I thought were secondary interests.

While you’re roaming keep your eyes open for street art that may interest you just as much if not more so than what is held in the galleries and museums. I was your typical tourist while I gazed up looking for hidden works by talented street artists. You’ll be amazed at what you find in any arrondissement.