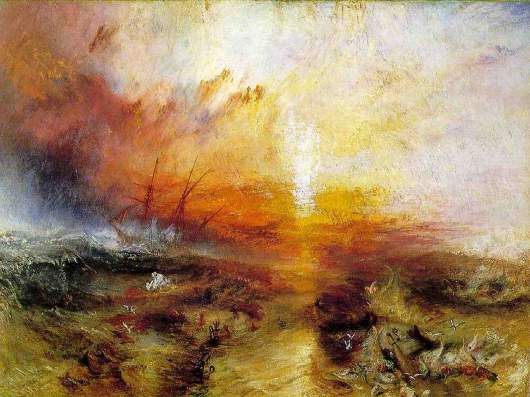 This month the ArtSmart Roundtable has chosen to focus on colour. A painter that first comes to mind is J.M.W. Turner and it being Guy Fawkes Day I have one doozy of a Six Degrees of Separation for you. While this post isn’t solely on colour you can read my colleagues’ posts that are a bit more on point. Their post links can be found at the end of this blog post.

I remember the first time I saw a painting by J.M.W. Turner. It was in my first university art history class upon a projector hanging over the theatrical stage used for plays. There were 100 of us at first all sitting in the red theatre seats awaiting to decide wether we’d drop the course based on the page requirements of our final essay. If it were anything over 10 pages more than 1/3 of the students wouldn’t return the next week.

My professor, hidden in the darkness on the left hand side of the stage, introduced us to a broad range of artistic genres and movements within 90 minutes. One of which was Romanticism. A convergence of colour then popped onto the screen. At first hard to visualize the larger representation, I found myself drawn to the illuminating golds of the flames, the dank browns of the dark waters, and the mystery of the depicted subject. I knew I loved it. Then you read his titles which are poetic and reveal the sublime horror of what you are looking at despite being so bewitching and at times angelic.
It really was love at first sight. I was in love J.M.W. Turner’s use of colour, movement and his variety of subjects: morbid moments in history, nature dominating ancient ruins, and spectacular landscapes around Europe.
I even developed a bit of a crush on his self-portrait as well.
And when I develop a crush I’m in deep.

Then during my final year of art history I ventured to take a Directed Studies course which required me to choose my own topic of research. Little did I know that my topic of choice, Colonel Lionel Grimston Fawkes and his work within the Caribbean and Canada would lead me to a family connection with J.M.W. Turner.

I should begin by explaining who Col. Fawkes was. Aside from being a reluctant relative of Guy Fawkes he was also an artist.  I came upon his work in a short memoir written by my great uncle Jack Borradaile. There had been a rumour told to me by my grandma that her eccentric uncle was a writer and had published a book. This intrigued me because I was studying creative writing alongside art history and could smell a story in the works.
A Google search led me to find a rare book called “The Lady of Culzean” written by John (aka Jack) Borradaile. I immediately purchased the book for $45 Canadian.

The book is short and left me with more questions than answers. It is a written account of his time living with Lady Constance Fawkes and her husband Col. L.G. Fawkes on Mayne Island, British Columbia, Canada. They had moved there from England after a tragedy in their immediate family and took solace on this small island shared with very few inhabitants in the 1925. Uncle Jack, looking for work after failing at the family tradition of taking to sea due his sea sickness, became manager of their fixer-upper-mansion-hotel they named Culzean (now demolished) after the Scottish Culzean Castle Lady Constance grew up in.

What really caught my eye in the book was the brief mentions of Col. Fawkes paintings of nature scenes upon the island which led me to pursue research on his work. Another detail that had escaped my family was the fact that Col. Fawkes belonged to a family who were devoted to the arts. Col Fawkes’ great grandfather was Walter Fawkes, a dear friend and patron to J.M.W. Turner.

It turns out that Col. Fawkes had actually owned two of Turner’s original paintings,  Jack calls one Wharfdale and the other The Tow Boat, which I still cannot find any visuals of on the internet nor through my research. Even more odd is the fact that Jack Borradale tells of an account where he hand delivered the Turner paintings wrapped in only brown paper. He walked the streets of Vancouver and arrived at the Vancouver Art Gallery by public bus. After I contacted the VAG they could not find any record of ever having possession of this particular painting.

What happened to it? I can only surmise. However, Col. Fawkes’ family owned Farnley Hall so it could have went back to its original place upon the walls of this stately home in North Yorkshire.
One of my favourite accounts in uncle Jack’s book was about a letter he inherited:

“…written by a Mrs. Fawkes of “Farnley” to her daughter telling her about a very interesting afternoon she spent with J.M.W. Turner, R.A., viewing some of his wonderful pictures.
She [wrote], ‘We walked down the gallery to look at the large picture of Richmond Park, but as we were passing The Snow Storm, I stopped before it and Turner found it difficult to get me to look at any other picture. I told him that I had seen many storms and had been in such a scene as this one on the coast of Holland.
‘Turner told me that he could never have painted The Snow Storm had he not asked a sailor to lash him to the mast to observe it. In this position he stayed for four hours and never expected to escape. I felt bound to record it if I did.’” (Borradaile p. 60)

After the death of Col. Fawkes and Lady Constance Fawkes my uncle inherited much of their estate including priceless works of art. He made his living selling off items and even took his family to Europe as I understand it.

Uncle Jack had such an immense connection with the Fawkes’, particularly Lady Constance Fawkes that he researched both our Borradaile family as well as her ancestry perhaps seeing her as family after their time together.

I search on. But in searching I have found a prolific connection to my uncle as a writer, a lover of travel and art. I have him to thank for extensively researching my own family ancestry which reveals that the Borradaile line also produced art patrons and others who have molded history in their own way. I keep his book that is compiled of rough copies of old pages in old books, newspapers as well as birth and death records as far back as the 15th Century. It’s exciting to think who else my ancestors crossed paths with or perhaps who felt honored to have crossed paths with them.