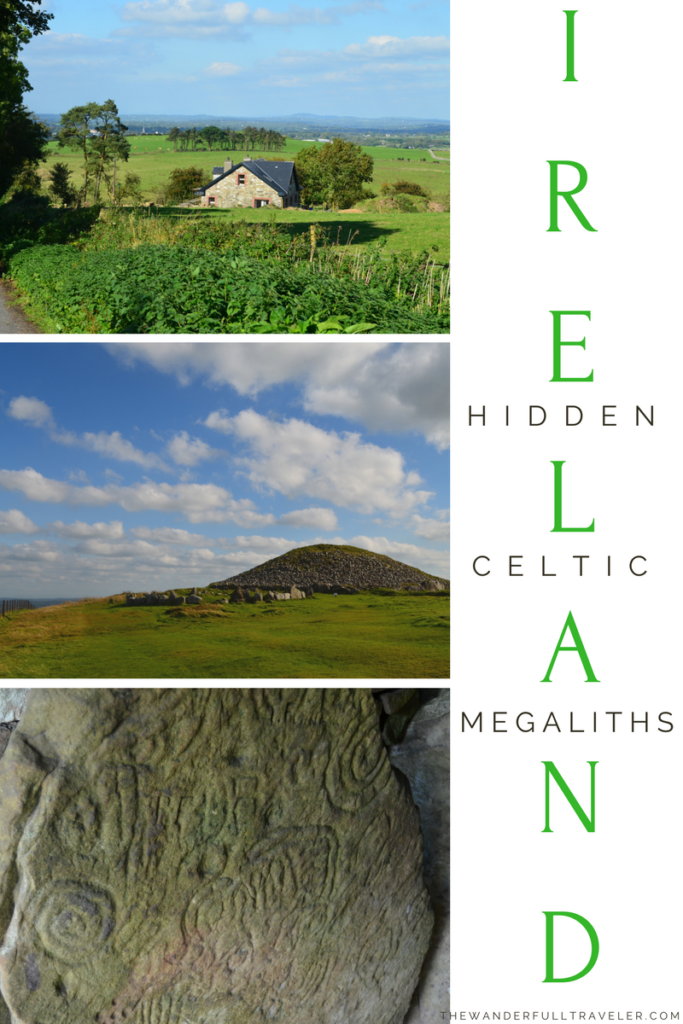 Rows of cragged trees with wandering branches lined the curvaceous roads along the River Boyne. I was on a tour with Irish Day Tours – the only tour group who featured the lesser known ancient Celtic Boyne Valley. Arriving at a white thatched roof cottage, restored as it was in 1800 Ireland, I was surrounded by the lush green rolling hills. This was the Loughcrew Megalithic Centre.

Typically, tourists interested in megaliths visit the more popular Newgrange, also known as Brú na Bóinne, which is considered the “Disneyland” of megalithic sites. It is the largest site but also more commercialized than Loughcrew Megalithic Centre.

Loughcrew is hidden within the countryside of County Meath, north west of Dublin, and a treasure cove for Megaliths. Their mysterious origins attract those interested in mysticism, mythology and paganism.

What is a Megalithic Site?

A megalith is a stone or group of stones that were used to create a structure. What these structures were used for are only guessed at. In the case of Loughcrew groups of megaliths surround a cairn on top of a lush green hill that belongs to the Sliabh na Callaighe hills, meaning Mountain of the Witch. The megalithic stones are in fairly rough shape and have been moved, some have even been removed during the Victorian age, this according to my guide although I haven’t found any articles to prove this. Pictured below is an example of the Loughcrew megalithic site.

What is a Cairn?

So now that you know megaliths surround the Cairn it is now time to explain what a cairn is. A cairn is a mound of stones signifying a memorial or an important monument.This particular cairn, called Cairn T, is only one of 32 cairns in the surrounding hills and thought to be 5200 years old. It is many things to many people but it is predominantly a burial ground with 30 people thought to be buried here.
It was also a place for rituals, gatherings and to celebrate ancestors, gods and nature.
In Loughcrew you get to go inside the Cairn with your guide. It is very small and only enough space to fit for 5 or 6 people at the centre. Pictured below is the Loughcrew cairn.

Before going in, we had to wait a few moments for a photography group to finish up their tour of the interior of the cairn. Their group was a only of 6 and so it felt as though we had the entire hillside to ourselves. Moments like these are what I travel for. It isn’t always worth seeing the most popular but rather spending the time to seek out the lesser known.

Once at the centre, in the darkness with only a strategically placed sliver of daylight coming through the ceiling, we could see a stone at the back with grooves carved into it. I had to use my flash to take a photo in order to capture what exactly I was looking at.

During the spring and fall equinox the sun comes through the entrance of the cairn and illuminates the above stone. You can celebrate the equinox at Loughcrew Megalithic Centre. During this time you can experience crystal healing, yoga and pilates along with archaeological and mysticism lectures.

Why is it named Mountain of the Witch?

The story is best told directly from the Loughcrew Megalithic website:

“Sliabh na Callaighe is the Irish name for the hills and it translates to “Mountain of the Witch”. The story goes that to rule over all of Ireland the Hag (or witch) had to complete a feat of enormous strength. She had to leap from hill to hill with stones in her apron. As she jumped from peak to peak she dropped a handful of stones. These stones became the cairns. On her final jump, to make her mistress over all of Ireland, she broke her neck and was buried under the stones on the side of the hill.”

Having traveled in the beginning of October all the sites we visited throughout our honeymoon were devoid of crowds. It was easy to get all the photos I wanted and have enough time to explore on our own without feeling pressured to make way for the next tour group. The pace was our own and at no point we were rushed by our tour guide.

Our entire group also had plenty of time to grab a photo on the Witch’s Seat and make a wish. As you can see it was very windy up there!
After our short walk down the hill – yes you must walk up and down – we were treated to our pre-ordered lunch hot and ready for our arrival. After the story of the witch I had to try the most famous dish they make at the Loughcrew Megalithic Centre...the Witch’s Brew.