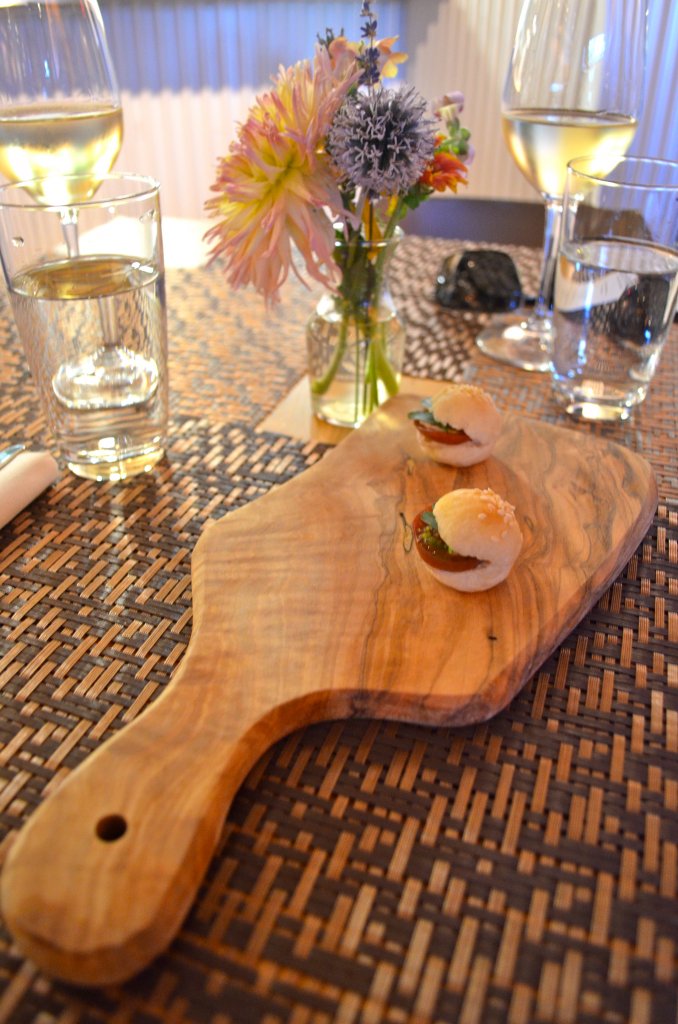 Les Dames d’Escoffier of British Columbia, a society of accomplished women helping other women in food related fields, arranged a province wide dinner celebrating the 100th birthday of much loved Julia Child on Wednesday. I was lucky enough to live in a city where one of my favourite restaurants, Waterfront Restaurant &amp; Wine Bar, offered a 4 course meal inspired by Child’s most iconic dishes.

First off, I was lucky enough to have come across the only 2 tickets left to this foodie event which meant that I also had the daunting task of choosing someone to come with me. My boyfriend usually works long hours so I was almost certain that he wouldn’t be able to come. Although, I was hoping he could join me as he stayed behind when I went to New York last month. I then mistakenly asked my sister, who didn’t appear at all interested, then I proceeded to my parents emphasizing the point that IF my boyfriend couldn’t come only then would I choose who to take. Their reactions weren’t favourable and so if my boyfriend couldn’t come I made up my mind that I would give the tickets to my parents, avoiding the choice of who to let go of and who to save from the edge of the cliff. Luckily, my boyfriend was able to go and my parents were more than a little disappointed.

Feeling only a little guilty I was determined to enjoy the evening. Upon our arrival at the newly renovated restaurant, fairly industrial with light wood accents, we were guided to our table that provided front row views of the kitchen. I for one do not have the chops to work in a kitchen and I couldn’t handle Gordon Ramsay yelling at me but I do love to watch the chefs create and cook. Waterfront’s kitchen is not so boisterous as it is graceful – chefs pirouette around each other with near misses between heads and hot pans.

After we were served our first glass of wine selected to be paired with our first two courses Chef Mark Filatow emerged from the kitchen to welcome us, point out his DVD collection of Child playing on the bar’s television and explain the menu he selected for the evening of Julia Child’s birthday celebration.

The menu was divided in two, the first two dishes are what represent his restaurant, what he described as a fusion between French and Asian with Okanagan ingredients. The final two dishes are from Child’s repertoire with Filatow’s own spin on them.

The first dish, Seared Quadra Island Scallop – with crab, cucumber tomato Sumac broth – was rather small with one scallop but served well as an amuse bouche. What really interested me about this dish was the light broth which would serve well as a soup base during the approaching Canadian winter. Otherwise the dish was fairly forgettable compared to the very rich dishes that followed it.

The second dish is a crispy memory to come back for, Crisp Pork Belly – with spicy miso and pickled cherries. Although there was very little amount of spice who could complain about pork belly? Waterfront Wines’ pork belly is one of the best I’ve had with a ton of flavour, the cherries being both sweet and sour pairing perfectly with the salty and crisp pork belly upon a sweet and sticky base that almost had a maple flavour.

Finally we reached the dishes inspired by Child herself. The main event was the Roasted Pemberton Meadows Beef Tenderloin with cheek bourguignon, pomme boulangere and chanterelles. Basically, it’s your gourmet meat and potatoes. It was a dish that reminded me of my great-grandmother’s meals prepared when the family reunited in Merritt for the winter holidays. The scallop potatoes aligned like an accordion with bacon like music notes. The tenderloin was tender and thick, surrounded by thinly shredded cheek. The memory of my great-grandmother made me fall into a deeper pit of guilt knowing that my parents would have appreciated a dish that brought to mind our great-grandmother – a sort of Julia Child of the family.

Our plates were happily cleaned in the end and half forgot about dessert. A mid-size plate full of baked apples surrounded by crumbly crust seemed daunting at first until we slowly dipped out forks into vanilla ice cream, an apple and flakes of crust. Before we knew it the dish was practically eaten and we were testing our limits of capacity. A few more glasses of wine and we needed a walk along Kelowna’s waterfront.

Lately I have been thinking about the link between writing – this blog, short stories, novels and even poetry- and food, two of my three passions (the third being travel). I love to tell stories and read them. I love to eat food wether it be food that is apart of a tradition (cultural or familial) or food that someone has laboured over for the sake of his or her restaurant or family. It seems that in both forms there are stories involved. A story of a nation, a story of a family’s struggle (from Norway to Canada as is the case with my great-grandmother) or a story of passion and love. I do wonder what Chef Filatow is sharing with his patrons through his menu, although I gather that it is the bounty of the Okanagan as well as his technical experience preparing French and Asian food (I cannot surmise further than the obvious). Preparing food, it seems, is another medium of storytelling that I for one cannot get enough of.