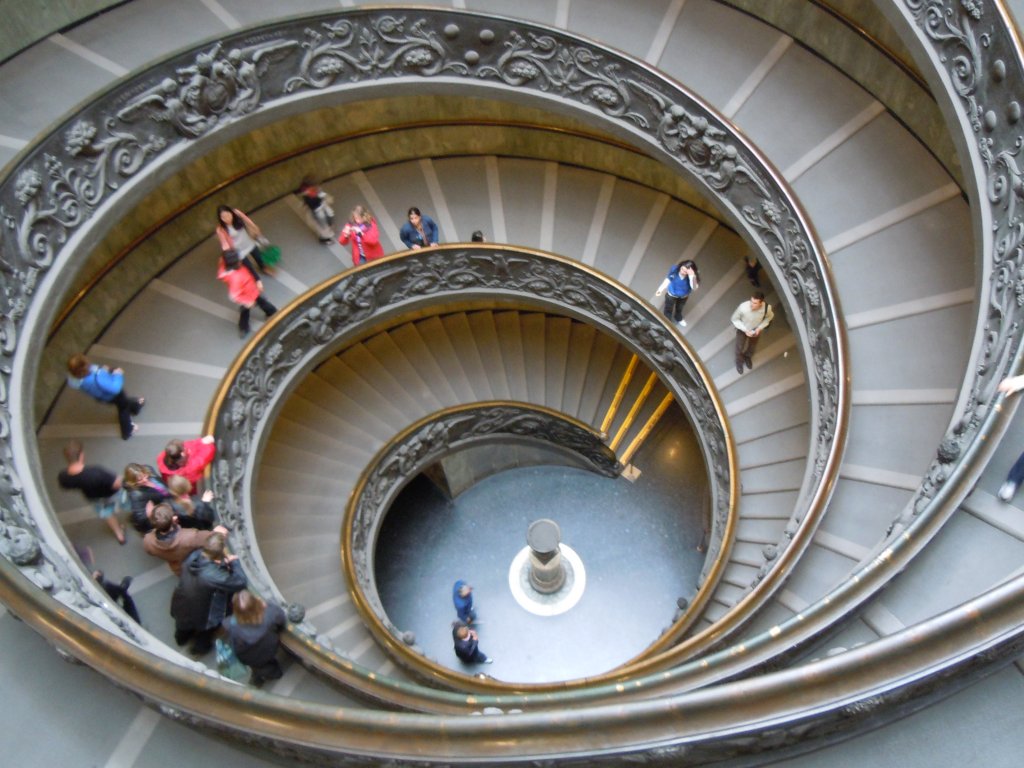 The Vatican Museum was a highlight of my trip to Rome. However, the weather was not cooperating at all so my boyfriend and I stood in the rain (with sandals) for 45 minutes waiting to get on the other side of the fortress walls. The wait was mainly my fault. After a day and a half in Rome I was still suffering from jet lag and so I woke up from a nap after lunch around 2, hailed a taxi and found myself at the end of the line by 3:00.

Upon entry, as we climbed our way up the stairs, I realized there was someone very familiar walking in front of me and my boyfriend. I dug my fingers into my boyfriends arm mumbling I think I know this guy but it was inaudible to anyone but me. He replied whaaat? but I just shook my head trying to subtlety point in the direction of the question mark in the leather jacket before me. Frustrated with the lack of communication we had moved away from the familiar (and yet unfamiliar) movie star so I could fill him in. I couldn’t, at the time, think of where I had seen this character before, all I could say is…I know this guy from somewhere!

Then it hit me like a ton of bricks when we were later watching the Italian news… The entire cast of Robin Hood (2010) was in town promoting the film. The man if front of me with a personal guide was Kevin Durand, who often appears in films with Russell Crowe (such as 3:10 to Yuma). As for Russell Crowe, he was at the Spanish Steps serenading the crowd with his Canadian pals, the band, Great Big Sea. How frustrated was I when I realized I had chosen the previous day to visit the Spanish Steps!

Although, I digress.
The Vatican Museum requires a large amount of time to view most of the collection. I was determined to see the Sistine Chapel. A long and narrow corridor led us to the chapel. It was stop and go the entire route and once again I had found myself in another line. A much more claustrophobic line. Then suddenly we inched our way inside a dark room with maybe 200+ people squeezed in the historic chapel. It was the most haphazard display of art and history I had ever seen. The light was poor and all of us were herded out as quickly as we got in. No matter how long you wanted to stay and see the impressive masterpiece, it didn’t matter. I was pushed forward by incoming people. There were others I could hear mentioning how they were trying to suppress nagging claustrophobia and there were rude women (mainly) threatening physical contact with anyone who will touch them but there was no choice, we were sardines! There was only the exit. Most of the visitors didn’t even both to strain their necks and look above them, they only wanted to get out.

The Sistine Chapel was a disappointment that could have been avoided if we had just arrived earlier, but even then the lighting was quite dim. To top that off there were guards constantly yelling out No Photos in Italian and English while flashes went off temporarily illuminating the work above our heads.

On wards and up wards we went finding less hectic pockets of the museum where no one pushed or became angry. The rest of the collection was slower in pace and we enjoyed every inch we could before exhausting our feet and eyes. We devoured a light snack at the Vatican cafeteria which also serves wine! Just the beverage one needs to recover from such a day.

After extracting what you want from the Vatican Museum, I would suggest touring the neighbourhood outside of the medieval walls as well. The area is charming and even holds some delicious restaurants with authentic Italian cuisine…none of the depressing tourist trap food that I had come to find around the Colosseum.