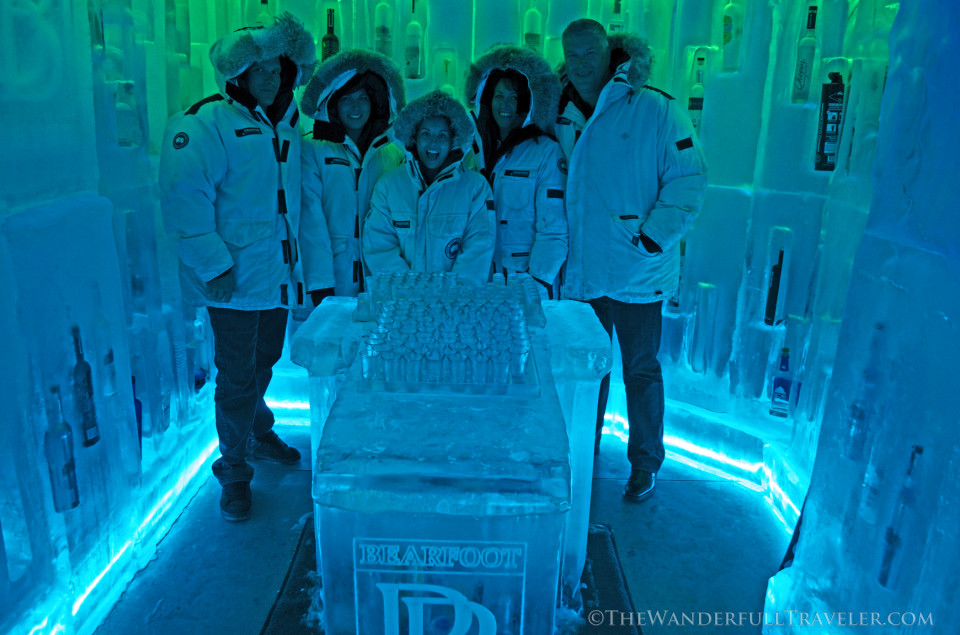 I used to live up North where the winters would reach -40˚Celsius and school would shut down for up to three weeks. Playing outside would be a struggle for your lungs unless you had a wool scarf warming each breath and ice patches were both a potential hazard and source of fun. When I left Prince George, BC at the age of thirteen I was elated to be heading south (not so much to be leaving friends) and never having to deal with the long winters and short summers again. But I never thought I would pay to go into a -32˚C room to be surrounded by ice and dressed in a parka fit for the Arctic but I had a good reason…there was vodka inside.

I don’t think I ever remember my parents escaping to the shed with their snow suits on, shot glasses in hand and a bottle of Grey Goose or Belvedere in the other while living up North. But I do remember summers when there would be mysterious smoke on the other hand…
But nonetheless my dad arranged for a birthday toast to be had within the room for my mom at the Bearfoot Bistro in Whistler. The Bearfoot Bistro is a fine dinning establishment with accents of rustic cowboy leather stitched chairs and cast iron.

Hidden in the back of the restaurant, in a separate dinning area next to the intimate bar is a green glowing glass door where the Belevdere Ice Room awaits your entry. While at dinner (post coming soon on the food) our charming Australian waitress, who revealed that she had her fair share of surviving the outback, revealed the surprise to my mother with genuine shock her face went red and we headed through a door, into the halls of The Listel Hotel, leading us to a large wooden armoire with huge white parkas fitted with fur around the hood. I hadn’t worn something this thick in over fourteen years when I would prepare to walk to school in the dead of a great white north winter. Although it was welcomed as I was a little nervous to be entering the room with a pair of sandals.

The host lead us into the icy fortress of solitude with 50 vodkas to choose from and many bottles displayed along the back ice wall with inserts made for each bottle. Although some bottles were frozen into the ice as well and Belvedere emblazoned their brand name into the ice walls near the entrance.
It wasn’t as cold as I thought and my toes withstood the cold room temperatures quite well – it may have been the alcohol consumed previous to my entry.

In the Belvedere Ice Room you have a choice of 2 shots per person or 4 and I was glad we settled on 2 but I am sure the boys could have handled more being vodka connoisseurs. We left the flavour selections to my mom who chose a smooth elite shot of Belvedere Intense in a black bottle and another lemon and tea flavoured for us girls. The host took five glasses from the frosty ice table, that would make any kid want to stick their tongue out, and placed them before us filled to the brim.

1, 2, 3 Go! We all counted. I can never do it on 3 but on 4 as I need to gain the extra gull before I let it slip past my tongue – as much as I can – and swallow letting the cool liquid reach my throat creating a refreshing feeling. The room being so cold and it being Belvedere, the sting of vodka is minimized due to the quality and freezing temps. Everyone took it down like water except for myself which was more like a kid eating a sour patch for the first time. The lemon tea on the other hand wasn’t quite a fan favourite and the reaction of my sister, dad and boyfriend was similar to swallowing moonshine. My sister describes it as a mixture of tequila and vodka while my dad says it is “Just wrong”. I and my mom rather liked the taste on the other hand.

The Belvedere Ice Room was one I would highly recommend especially if you are a vodka connoisseur. Your time in the room is relatively short but it’s enough to take pictures, ask questions and make birthday memories.

If Vodka isn’t your thing the Barefoot Bistro also offers Champagne sabering in their wine cellar, dinning at the chef’s table with a front row seat to the kitchen or host a private dinner or event dinning in their cellar of 20,000 bottles of wine.

Have you been in an ice room before? Or, like me, have you lived in an wintry icescape before?

More icy experiences in the world:

Hotel de Glace in Quebec City – an entire hotel made of ice.
IceBar by IceHotel in Stockholm, London, Oslo, and Jukkasjarvi.
Minus5 Ice Bar with two locations in Las Vegas and one in New York.
Amsterdam Xtracol IceBar