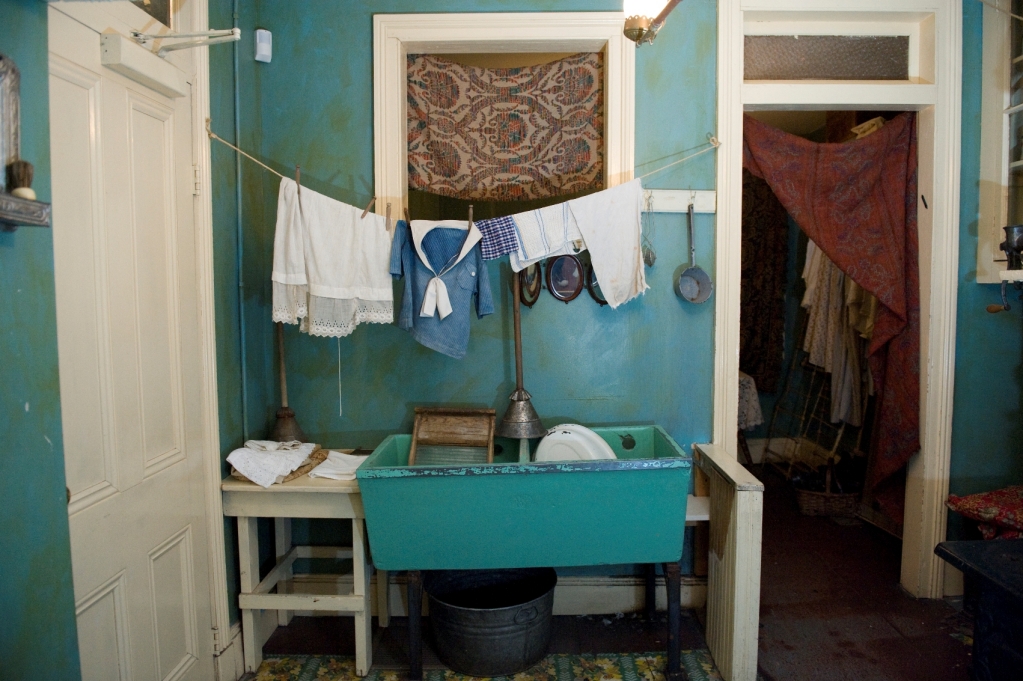 As a Canadian, Thanksgiving is October 8th and as a family, like many North American families on Thanksgiving, we gather to share stories and of course eat. I look around the table with my grandparents, parents, my and my sister’s boyfriend and I notice that none of us identify as solely Canadian. My dad descended from Ukrainians, my grandparents from Norwegians, Swedish and British immigrants, my boyfriend James is descended from Doukhobor Russians and Scottish immigrants. Our dinner table holds a varied history of both the privileged and poor but all tried/are trying to find a better life in a new and unfamiliar place.

In finding a new home one often longs for the familiarities of the old and comfort can be discovered within the culinary traditions. The history of the immigrant and the introduction of their food within a new geographical and cultural context is explored within the Tenement Museum’s walking food tour of the Lower East Side. I had the pleasure to interview Adam Steinberg, the curator of the new food tour.

What led the Tenement Museum to decide to create a food-based tour that focuses on the Lower East Side and its history?

We’ve always known that food plays a special role in the history of the Lower East Side, and of other immigrant neighborhoods across the United States. But we’ve never been able to re-create the tastes and smells of various cooking traditions in our 1863 tenement – spilt food can damage our artifacts and attract vermin. So we crafted a food-based neighborhood walking tour that allows visitors to taste some of the foods that tell the story of immigration to America.

In your article, “What We Talk About When We Talk About Food: Using Food to Teach History at the Tenement Museum,” published in the Public Historian you explain that you have had not previously created a tour that included food. How difficult was it to curate such a walking tour focused to combine history and food, especially because your academic background is in urban geography?

Many urban geographers study foodways in cities, so I was familiar with the theoretical issues relating to how urbanites cook, shop, and eat food. But translating those (sometimes esoteric) theories for our visitors posed a challenge. I found that the best way to relate those theories to our visitors is by focusing on the stories our visitors tell, and then using those theories to help our visitors appreciate the context for their food choices.

More challenging were the logistics of the tour. Which food establishments would we visit? What foods would we serve? If we visited every establishment we wanted to visit, the tour would last for hours and travel for miles, so we had to make judicious cuts. We also had to have a Plan B for every establishment, in case one closed for a holiday, fire, or family emergency. And unlike most other tours, the process of creating this tour never ends, as old establishments close or move while new ones open. Neighborhoods never stop changing, especially when it comes to food.

What kind of dining establishments are included? What establishment has been doing business the longest in the area?

We try to include establishments that represent the variety of food traditions on the Lower East Side. The largest immigrant waves to wash over the neighborhood were German, Jewish, Italian, Caribbean, and Chinese, so we include establishments that specialize in each of those food traditions. We also include more gourmet establishments to represent the newest wave of residents, who tend to be wealthier, college-educated, U.S.-born citizen. DiPalo’s Fine Foods, founded in 1925, is the oldest establishment featured on every tour. But on Saturdays and other Jewish holidays, when Kossar’s Bialys (founded 1936) is closed, we serve bagels and cream cheese from Russ & Daughters, which is even older – it was founded in 1914.

Do you have a favourite establishment or dish? Is it different than your favourite dish to share with the tour participants?

I love all the establishments on our food tour, though if I had to choose a favourite, I’d probably choose Panade, a fusion bakery that specializes in cream puffs. Its owner, Yvette Ho, is always ready for a friendly chat, no matter how busy she is baking. And her black sesame cream puffs are truly irresistible.

Are there any cultures that are left out or any that you feel should be included but aren’t (perhaps because an establishment is no longer open to be included in the tour, etc.)?

Yes! There’s a terrific tradition of Roumanian steakhouses on the Lower East Side, and Sammy’s Roumanian Steak House is just around the corner from the Museum. I just can’t figure out a way to serve steak to a walking tour. I also really wish there was an establishment that specialized in Irish food. The Irish played a major role in the history of the Lower East Side, but there’s sadly not much of a market among locals or tourists for Irish cuisine.

Why do you think these establishments are still surviving within this economy and with places like Eataly attracting so many patrons?

For two reasons: First, there’s still a large population of immigrants on the Lower East Side looking for affordable food establishments that serve foods they’re familiar with. And second, there’s a large number of visitors to the neighborhood hungry for “authentic” immigrant food experiences. I put “authentic” in quotes because the foods prepared, sold, and served on the Lower East Side are not necessarily authentic representations of some foreign culture. Rather, they are authentic representations of the culture of the Lower East Side. Food never stays the same when you travel from one locale to another.

You offer this tour to grades seven to twelve and the “Taste of Tenement” tour to grades one to six. Why do you think it is important to educate children and young adults about the kinds of foods offered within these historic neighbourhoods?

Because food is something we all share in common. Everyone eats, and exploring the similarities among and differences between the foods we eat helps everyone – especially children – appreciate our unique cultures and shared humanity.

What is revealed about the history of the immigrant experience and the identities of people who lived within these neighbourhoods?

Simply this: Immigrants are not some “other” living in our midst, slowly assimilating into our culture. Rather, immigrants are, culturally speaking, Americans too, and they contribute to American culture starting the moment they settle into their new home. Everyone in this country creates American culture together, and that story is told in the foods we all eat here.

What’s a memorable moment you experienced while hosting the tour?

Every tour has a particularly memorable moment, so I’ll share the most memorable moment from the most recent tour I led: I asked the visitors if any of them were immigrants, and one woman spoke up. She came to the United States from Nigeria when she was 18 years old, and she described in evocative detail the trouble she had in finding Nigerian ingredients in America, and the disappointment she felt when those ingredients never tasted the same as they did in Nigeria. It was a story that perfectly evoked the experience of new immigrants to the United States, and I had the opportunity to tell the other visitors that this woman’s experience was probably much like the experience of their immigrant parents, grandparents, or great-grandparents when they came to this country so long ago.

You ask tour participants to close their eyes and imagine their favorite childhood food memory, who made it, where it was made, etc. Please share your own favorite food memory with us.

Gazpacho. My mother was the daughter of Eastern European Jewish immigrants, and had her family stayed in Chicago, she would never heard of gazpacho growing up. But when she was 3 years old, her family relocated to Los Angeles, where she was deeply affected by the Spanish-influenced cuisine of Southern California. There she learned how to make gazpacho, and once in a while, when the tomatoes were in season, she’d make it for me while I was growing up in suburban Maryland. She didn’t much care for cooking, so it meant a lot to me to watch her spend so much time on one dish.

Thanks to the Tenement Museum for the provided images as well as Adam Steinberg for agreeing to the interview.

For tickets to the Tenement Museum food tour and more information on all their tours they offer please visit www.tenement.org