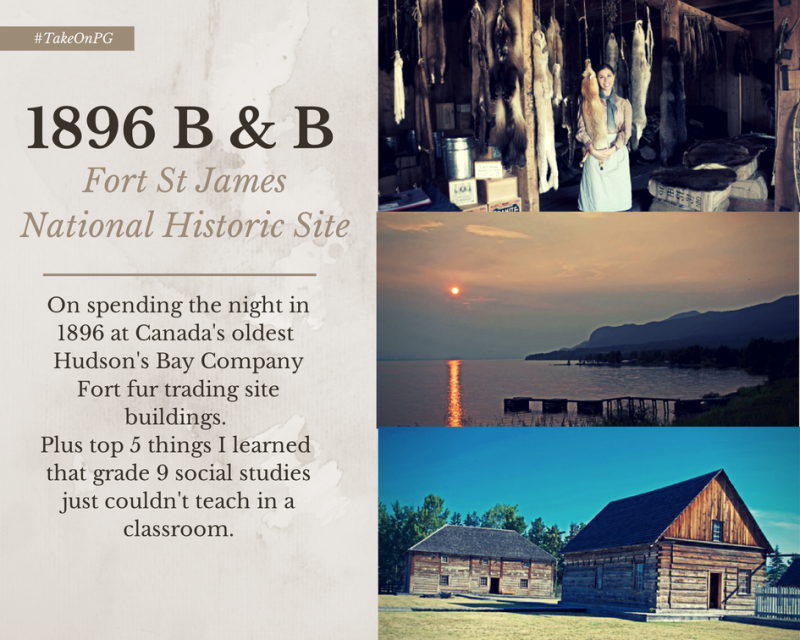 Let’s get rustic! No plumbing. No running water. No air conditioning. Alone in a large home from 1896.
It was an evening that I thought would be a challenge for this city girl.
But on I went straight from the Prince George airport to spend the night back in 1896 at the original site of a Hudson’s Bay Company Fort (first established in 1806).

I had to reach back to my grade 9 Social Studies when Canadian history plagued my curriculum and I took to doodling in my notebook. This was the grade I tended to get yelled at by my dry professor who had a thick Middle Eastern accent, or maybe he was from Eastern Europe? Either way, he was difficult to understand which made Canadian history even more tedious to learn.

Twelve years later I had the chance to live within history for an evening at the Fort St James National Historic Site.
How have I not been here before? Especially as a young elementary student that lived in Prince George I have to stay I missed out on this cultural Canadian gem.

I arrived at 7:30 pm and was given the keys to what is known was the Officer’s House, my home for the evening. I was oblivious to the fact that I would be the only one (other than security) on site for the evening. The sun was still high as the grass baked and the backwoods coughed up a bit of wild forest fire air. Rene, my raconteur, guide and chef for the evening, passionately told me stories of the families, single men and First Nations notably the Carrier tribe, who occupied the land while the fur trade was at its peak.

Fittingly, Rene made me a delicious salmon dish, it being the main food source for people here since pre-European contact. In fact, where Stewart Lake (as seen above) and Stewart River meet the First Nations fish for salmon. Men who came here to work would often only eat salmon, especially when the fort was first established in 1806.

Rene and I sat overlooking Stewart Lake with a blazing red sun. The scene was picture perfect and we imagined what it was like as a woman first settling here. Trusting in her husband to provide from an unforgiving and harsh landscape. The true and pure North. The wild.
History was starting to come to life.

After a homemade apple pie and snippets of stories about who called the Officer’s House home throughout its history I retired to my living quarters.
The floor boards creaked and it smelled intensely of pine in the hot summer air, the dead heat penetrating through the walls. The detail of each room was impeccable. The table was set with china. The chickens cooed in their coop connected by a door to the kitchen with a wood fire oven and antique kitchen supplies as well as various teas. The house rooms are restored to the exact detail of 1896 when A.C. Murray and his family lived there. The definitive details made possible by written accounts and vocal recordings of daughter Annie’s memories while her adopted father was officer of the Hudson’s Bay Company fur trading fort.

Exploring each room of the house on my own with a cool glass of water from a clay vat I wondered wether I would have been strong enough to live out here so far away from modern conveniences. Many women would leave after the long journey to this Siberia where the Summers are short and the Winters resembled the surface of the lonely cold moon.

I sat on the porch’s green rocker swinging slowly as the sun, which resembled a red hot branding iron, dipped down into the cold lake. How many times has this exact scene been observed by a being on this porch before? Did the Murray’s take pleasure in these hot Summer nights before the onslaught of snow and ice?

Bed time arrived and I suddenly realized that this might well be the place of my first ghost encounter. I said a long goodnight on my iPhone to my parents, happy that the message wouldn’t take a year to get to them like hopeful letters of love did over a century ago. My bedroom was the Murray’s room with a view of the horned goats who turned out to be peeping toms. The wool blankets atop my bed, I am sure, were welcomed comforts during the Winters but this Summer night I would only use a light sheet. Like a child warding off evil spirits I kept the wall sconce lights on, what few of them there were. Each rumble of the chicken coop I imagined that a ghost provoked them, or worse, a hungry wolf in the garden.

The bend of time took hold and sleep was reached. By early morning the wool blankets were surrounding me as the air reached a chilly  7˚ Celsius. By 8 am it was well on its way to 20˚C and I was happy to have a cool shower in the facilities provided in the main office. It felt a little like cheating history, in a good way. Ghosts, eat your heart out to modern day plumbing and choosing your water temperature!

After breakfast I was amazed at the quality of original buildings and the unique stories told by passionate guides. It taught me a few things that social studies just couldn’t back in the day…

The beaver was the most prized hide but why? Well it was all because in Europe during the early 1800s beaver pelt hats were all the rage. It took 20+ steps to turn the beaver pelt into a fashionable top hat and soaking the fur in mercury was one of them. By the mid to late 1800s silk hats had become popular which began the decline of the HBC fur trading posts.

When the fort was first established there was very little to sell other than clothing, supplies for work in the wilderness and salmon. But by the mid-1800s and especially in 1896 you could easily spend a week’s pay on alcohol, tobacco, chewing gum, shaving kits, medicine, as well as imported products from Europe and Asia were all available in the trade store.
Of course, the HBC store also sold the very popular blankets – Marisa, my guide within the HBC store explained that you can easily tell a fake HBC blanket from a real one but the black points or lines which would denote the size. No black points means you’ve got a fake. Today these authentic blankets can go for as high as $600 Canadian depending on quality!

Men back then wouldn’t bathe often. In order to keep warm they wore many layers the base of which was their long johns. Instead of taking the long johns off when they started to ware off they would put another pair on top. By the end of Winter they would have three or more pairs that they had yet to take off all season. Summertime would arrive and then came time for the removal process. Their body hair would grown through the fabric which mean taking them off was a painful process.

4. Moose & Cougars: Not Animals Normally Found in Northern BC

This fact almost blew my mind. I used to live in Prince George where seeing a moose run down your residential street was not uncommon. But in fact, the moose followed the newly placed railway system (1880s) leading them through Northern British Columbia and even further south. The cougar followed their food source, the moose, which explains why they both are now commonly spotted within the Prince George/Fort St James area.

5. Dinner is Served…Salmon Leather Anyone?

Salmon was the main food source in the early 1800s way before the HBC store was well stocked and way before the railway was established within British Columbia. In order to preserve the salmon they would dry and cure it rendering the normally meaty fish to a leathery texture. The hard working men would have to rely on the tough salmon as their main food source. Weight loss was inevitable but the tough texture would also wear down the men’s teeth to half their original length.

As the final frontier to be settled in Canada, British Columbia was and is a wild and unruly place. The imagination captured by settlers back then still holds in travellers today as many Europeans make the long journey to explore the rough terrain and sublime beauty framed by both modern architecture and historic sites.
I had a moment of feeling spoiled when I learned that many visitors to Fort St James Historic Site were Europeans amazed at the gorgeous scenery and landscape with hazards I have grown up with.
I was happy to have taken this form of “staycation” enabling me to realize that there’s a whole lot more to British Columbia that I need to revisit.

Thank you to both Fort St James National Historic Site and Tourism PG for hosting my stay. The following post represents my true feelings about this unique gem and was in no way influenced by anyone.

Discover more of the world by signing up for my newsletter & updates here.