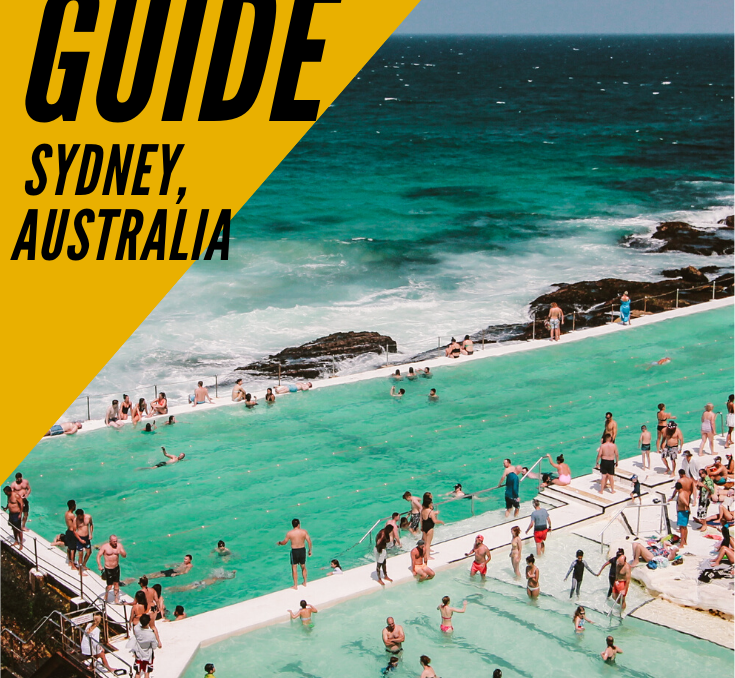 A guide to Sydney, Australia? No, I am not a Sydney insider as you might have guessed. But I know someone who is! Let me explain…

You might have read, I am starting a food tour company and the website has officially launched! Along with starting Food Tours Kelowna I am a member of the Global Food Tourism Association. It has provided a wealth of knowledge for me as a newbie and many members have been so gracious in answering my questions. Another aspect that I love about GFTA is that its members are from all over the world which gave me an idea that led to this post. I’ve begun an Insider’s Guide series!
People from all over the world are contributing their expertise and insight to readers of The Wanderfull Traveler!

This week we head to Sydney, Australia where Helen Fraser shows us what’s up in the land down under.

Tell us a bit about yourself Helen!

When I left school, I studied Hotel Management with a strong focus on Food & Beverage. I traveled and worked for 1 year in Canada and another year in the UK/Europe before coming home and jumping ship into Tourism. I worked for a few companies before creating my own city tour business with a tour called the Story of Sydney. It is a history tour that goes for 4 hours, covering all aspects of the city to the beaches, all the while telling the story of how Sydney went from penal colony in 1788 to now, one of the most beautiful cities in the world.

I started operating food tours in 2009 and then in 2018 I introduced an art tour. So now I have the slogan SEEK-TASTE-FEEL because I believe that to truly experience a city it is good to understand the history (seek), eat the local fare (taste) and experience the vibe/culture (art).

I offer private charter tours that are tailored especially for the guest who may have a specific interest to explore. I am connected to many local businesses, old and new that help me stay up to date with what’s happening and how the city is evolving. Local council send regular updates advising of opportunities to explore and collaborate. I am also a member of the CBD Chamber of Commerce that links me to amazing people operating small business like mine.

Sydney sells itself with its beautiful harbour, pristine beaches, clean and organized streetscapes. But what makes it so extraordinary is the people. It is a bubble of positivity and everyone is so friendly. The people create the buzz, and when you’re driving/walking around, witnessing the locals sitting in the cafes, bars, restaurants, gardens and parks there is an energy that inspires. I have called Sydney home for 32 years and I won’t be leaving any time soon.

Tell us a bit about your city.

I hear from visitors around the world that the food is not a feature when they think about what they will experience in Sydney. But, when they arrive and dig in, they are pleasantly surprised at how sophisticated the restaurants are. The food is world class with delicious fresh ingredients. The staff are friendly and professional. Being of English origin, European influence is obvious with quaint café culture and excellent coffee everywhere you go. The weather is favourable for most of the year so alfresco dining is in every neighbourhood. We have 25 beaches lining the coast of Sydney and the outdoor vibe continues with bars and cafes and bbq’s in the parks.

Sydney welcomes people from all over the world, young and old. It has a young and energetic vibe with the gentrification of industrial wharves and harbour foreshores.

When people come to visit, they love to live like a local using all four modes of public transport (light rail, ferry, bus and heavy rail) getting them to the harbour and coastal beaches to surf, bake or stroll along the many beautiful paths. The Blue Mountains, Hunter Valley wine region and South Coast/Southern Highlands are all a pleasant 2 hours south, west and north of the city and popular day trips into the countryside.

What mistakes do travellers typically make while visiting Sydney? How can travellers avoid them?

It’s a common problem worldwide, but visitors need to be aware of taxi drivers who overcharge. The price should be around $80 when traveling from the international airport to a city hotel. You should pay no more than $100 during peak hour.

Large group experiences like the hop-on-hop-off bus have a huge budget connecting people to the mainstream tourist attractions which is convenient if you like that sort of thing. But if you are someone who wants a more authentic emersion then small group operators can give a heartfelt and true experience.

Restaurants and clothing may appear expensive at first glance, but we have GST (goods and services tax) included in the price, plus it is in Australian dollars which when converted to American looks much more attractive.

Advise the taxi driver before you get in, that the authorities have told you to expect that the charge will be between $80-$100 and have him commit to that. If he doesn’t, take the next one.

Ring 3-4 five-star hotels and speak to the concierge asking for their recommendation for a small group tour operator. They know who’s who in the zoo and will narrow your search very quickly. In fact, I would make it super quick and tell you they will most likely refer you to Ultimately Sydney, as we are the best city tour operator in Sydney, and I say that sincerely. We value your time and want to make every second a memorable one.

Not only will you learn the history, you will discover where the best restaurants/bars are, where the best shopping is and all the local hangouts. Sydney has many museums, galleries, studios and local attractions that unearth the city and gives a wonderful connection.

What are some must-see attractions?

We have a tour called the Taste of Sydney that takes you to 4 of Sydney’s newest foodie precincts. You can also reach a few of them easily by public transport. Barangaroo is great to get to by ferry and is the city’s biggest and most expensive urban development. The Tramsheds is a gentrified space in the inner-city suburb of Rozelle that you can get to by light rail and Central Park is a brand-new space south of the city easily accessible by bus or heavy rail.

All 3 city tours (the Story, Taste and Art of Sydney) travel to unique locations, but it’s everything in between that brings it all together into a wonderful 4-5-hour experience.

What are some great places to stay?

Sydney has a collection of boutique hotels that have been built into warehouses or wharves. They show the character of the city in stylish comfort and conveniently located. For example, check out Ovolo in Woolloomooloo, Pier One Hotel, The Rocks and Ovolo 1888, Darling Harbour. Apartment hotels are good for families and if you like lots of room. For example, check out the Meriton or Medina Apartment hotels.

Is Sydney known for a specific dish or drink?

Everyone knows that Australians love beer and every city has its favourite. Tooheys New or Carlton Draft are the classic Sydney beers from bygone years. Today, like every great city, we have a craft brewery in just about every inner-city neighbourhood, sometimes even two or three. Seafood is plentiful, and given that we have the 2nd largest fish market in the world after Tokyo, you must try a Sydney rock oyster and the classic fish and chips, Barramundi being Australia’s very own.

At breakfast, I dare you to try vegemite on toast. Make sure you toast your sourdough or Turkish bread well before you quickly smother it with butter. Then, on top of the melted butter, spread a very light layer of the black, salty yeast extract (don’t let that turn you off, it’s full of vitamin B and fends off mosquitos) and tastes great when paired with freshly squeezed CHILLED orange juice. I could take up an entire page with food and drink suggestions, so to save your time reading I’m going to suggest you get on a plane and fly here so I can show you instead. You must join the Taste of Sydney tour NOW…

What new trends do you see emerging in Sydney?

The new trend I see emerging is bush tucker, or bush food. Aboriginal Australia has been hidden from the world for as long as Australia has been known, and now that the truth is out and people are positively connecting, the world has access to this ancient and beautiful culture. Aboriginal life in Australia is spiritual and heartfelt. The dreaming is taught through story telling, dance, music and art. Time is not a thing and connection is everything.

What are some great places to eat?

My favorite lunch and dinner option at Circular Quay is Café Sydney. It’s mid to high expensive, but worth it for the views, menu, service and vibe. Book well in advance.

A great breakfast option in The Rocks is La Renaissance Café for amazing pastry’s and coffee.

Another great breakfast option is at Speedo’s in Bondi especially after you’ve completed the 1.5hr walk from Coogee. Do the walk at sunrise.