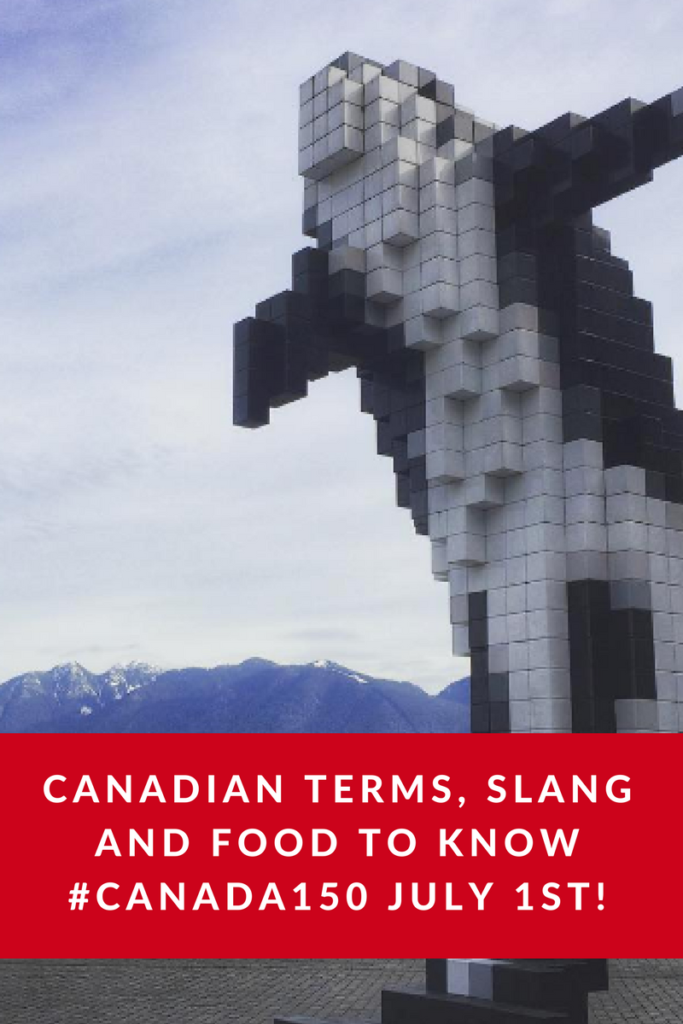 A lot of my readers are not from Canada. In fact over 50% are from the USA.
With the low Canadian dollar, especially since Trump has been elected, many visitors from south of the boarder are making a visit. And many are unprepared when they do. What’s a toonie or loonie? What’s a timbit or double double? Ketchup chips are a thing? Here’s how to navigate for my non-Canadian readers.

Canada’s classic hangover drink, a Ceasar is similar to a Bloody Mary but much better in my opinion. A Bloody Mary tastes like watered down tomato juice with a bit of worcestershire and vodka. A Ceasar on the other hand is spicier and how spicy is determined by the perspective of who’s making it. I always ask for extra spicy. It is also made with Clamato juice, as opposed to tomato juice, which is much more rich in flavour. The rim is always coated with celery salt, sometimes a few extra spices are added, and a lime wedge. You can ask for horseradish to be mixed in to your drink but hot sauce is part of its base. Sometimes mini sliders or a pepperoni stick will be added along with the classic celery stick. Order a Ceasar next time you have breakfast in Canada or make one yourself.

Timbits and a Double Double from Timmy’s

Let me break this sentence down. Timmy’s is short for Tim Horton’s, a coffee shop where many Canadians gather to idle away the hours with friends and talk. It is named after Tim Horton, a Canadian hockey player who played for the Toronto Maple Leafs as well as the New York Rangers and Pittsburg Penguins and so on. Much like Starbucks, you’ll find plenty of Tim Hortons around Canada. In the East Coast of Canada you’ll be hard pressed finding anything else really.
There’s always a line up at breakfast or lunch. Timbits are donut holes or mini donuts and come in a wide range of flavours. You can order a pack of 20 Timbits mixed to the employees whims but I find you’ll end up getting a lot of whatever isn’t selling that day. Instead I ask for a 20 pack of Timbits without the plain kind – who wants a donut without any icing or filling? The sour cream Timbits are oh so good.

Now if you want a coffee and you want double cream and double sugar just ask for a medium or large double double.

Loonie and a Toonie

A Loonie is $1 – we no longer have a one dollar bill. Amazingly, we used to have a two dollar bill as well but instead we’ve got the Toonie. When I worked retail and a foreigner from Europe or Japan came in and didn’t speak much English they would be lost. The gold one, with a loon on it, is the Loonie and the silver one and a polar bear framed in the gold-ish centre is the Toonie. These are invaluable for parking in downtown areas here in Kelowna.

Whether you like these guys or not, don’t diss them. It may cause a ruckus and toques or Blue Jay hats will be flying all over the place. The Tragically Hip is a cherished band in Canada. They aren’t so popular in the US but in Canada we celebrate them. Last year, Gordon Downie was diagnosed with a brain tumour which prompted a cross Canada final tour. The tour sold out and the final show in Kingston, Ontario was televised on my wedding day, August 20th, 2016. Sadly, I missed it. The show…not my wedding.

I can hear my own Canadian accent most when I say “bar”. It’s similar to how they would say it in the film or tv show Fargo. Anyways, the Nanaimo Bar (pronounces Na-neye-mo) is simply a classic treat. Very sweet and comes in many variations depending on everyone’s grandma or mom’s preference. It’s a no bake bar with the bottom layer made of chocolate and sometimes coconut. It’s crumbly goodness. The middle layer is yellow and buttery sweetened with icing sugar and (sometimes) vanilla custard powder. The top is a glassy layer of chocolate that melts and sticks to your fingers as you slowly enjoy each bite. Never ask how many calories are in a Nanaimo Bar…that’ll ruin the fun.

It’s tough to find a truly delicious butter tart unadulterated by raisins or walnuts. If there are any nuts in it you must then call it a Walnut Butter Tart or a Pecan Butter Tart. The crust can’t be too thick or too thin. The centre must be in between runny and firm and almost caramelized looking on top. You’ll find these at grocery stores and bakeries. Taste them all.

As an attendee of the Wine Bloggers’ Conference in 2013 held in Penticton there were SOME Americans attendees that were skeptical when it came to the selected hosting country. But there have been Canadian wineries bringing home the gold in International competitions, many of which are in my backyard of the Okanagan Valley. Not all wine are winners but we’ve got some worth sneaking across the border…not that I’ve ever done that! Much like our beer, some do tend to have higher alcohol levels so beware.

As much as you think it is a good idea to buy the smoked salmon at the airport to take home I think your money would be spent better heading to the local fish monger. Local smoked salmon or candied salmon is best purchased from a local fish monger such as here in Kelowna we have Codfather’s and The Fisherman’s Market. If you’re visiting a coastal town such as Tofino or Vancouver obviously your choices will be endless.

We’ll that’s my Canada. I know I’ve omitted some other slang like “clicks” which refers to kilometres and the obvious poutine but literally while I was writing this piece a similar article was published by Expedia. You can see their video featuring Canadian slang below to fill in any gaps I may have left.

Happy 150th Canada! How will you be celebrating? I am heading to Tofino for a combined 30th birthday / #Canada150 celebration. Follow along on my Instagram!