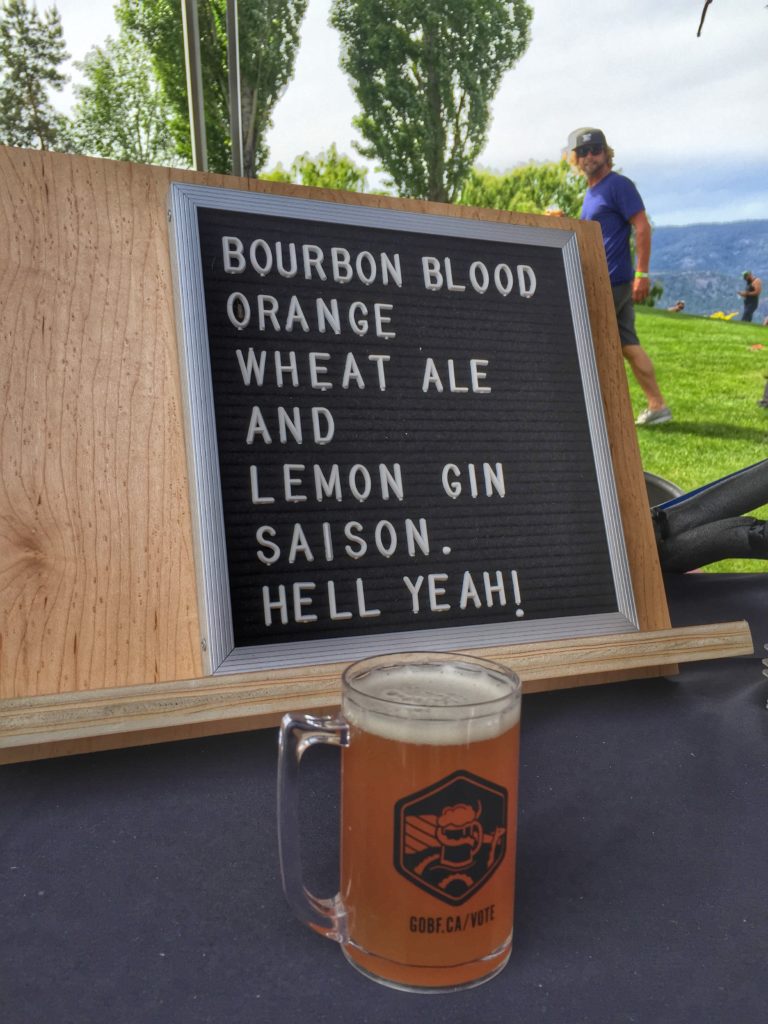 This weekend in Kelowna was the kickstart to the tourist season. Local beer enthusiasts and travellers from near and far arrived at the Waterfront park to find a long line of thirsty ticket holders, myself included. Thursday was the official kickstart with beer paired dinners hosted at The Curious Café, a local favourite for beers and gourmet pizza. On top of that the GOBF concert series offered plenty of great music at various venues around town but it was Saturday’s main event that drew in the numbers.

The weather was perfect and the mixed crowd of young hipsters and old bikers and then those like me all congregated with beer tasting cups in hand wandering from tent to tent asking each brewery, “Please Sir, may I have some more.” With 40 breweries pouring over 120 beers and ciders no one went home thirsty yesterday.

As a guest of the Great Okanagan Beer Festival, put on by the same folks as the Whistler Beer Festival, I was treated to a VIP ticket which came with a handsome swag bag filled with practicalities like a GOBF hat, drink tokens and a meal voucher, Red Bull, beef jerky and a book featuring craft breweries pouring at the event. But a few surprises too like this delicious apple scented soap made with beer from my favourite craft beer producers, Hoyne based out of Victoria, BC.

With each station you can request any beer the brewery has on offer for the event. Some sold out of crowd pleasing favourites – Crabbies Ginger Beer sold out fast by 3:00 pm for example. But as you wander from each brewery, each tasting costing 1 token = $1.75, you’re bound to find new favourites. Take Fuggles & Warlock’s The Last Strawberry, a Belgian wheat beer which has the delicateness of a cider but the lacks the overpowering sweetness you’d expect from a strawberry forward drink.

But this point also brings me to the amazing brewery brands and their concepts. Like wineries, beers and breweries show who they are on their labels. Some take themselves quite seriously, some are playful and target their audience with bright colours and tattoo-like art. With the recent announcement of Budweiser changing their longtime name to America you wonder where some CEOs heads are at. Luckily, in the craft beer industry creativity is copious.

This was the second year that the GOBF was held and obviously a success with a sold out event. So if you’re in town in May be sure to purchase your VIP tickets well in advance (think March-April). You’ll thank me when you get to skip the lines and get priority access to the Okanagan’s hottest beer festival.