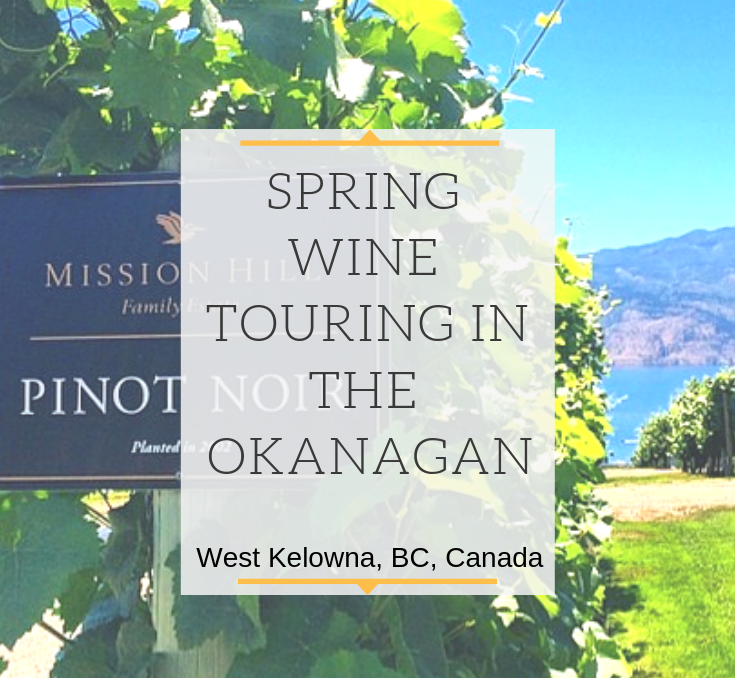 “Where are you from?” The first question asked as I sat myself in a van for nine, our chariot of sorts for the day.
One couple said Arizona, another from St. John’s and another from Vancouver. My sister and I? “We are from here.” I explain, “being tourists in our own city for the day.”

The truth is, I have only lived in Kelowna for seven years now but have completely adopted it as my home. I’ve lived in the north of British Columbia to the south along the Canadian/US border. But I never really felt like those places were home. Then I moved to Kelowna. It’s a city that keeps me guessing. It keeps me wandering and it keeps my creativity satiated.

Kelowna has helped me turn this blog into something larger than what was going to be a travelogue of my trips to Italy. With the food and wine scene I have found that during the peak seasons my cup runneth over with stories to tell.

From May 1st to 11th is the Spring Okanagan Wine Festival which not only kicks off tourist season but also a huge list of events that stretch on until Autumn. I thought what better way to rediscover my city by becoming a tourist for the day with Distinctly Kelowna Wine Tours. Luckily, they had room on one of their most popular tours which takes place in West Kelowna.

The tour covers the history of the region and is smartly organized in terms of economy. The tour begins at two small rural wineries and ends with two elegant wineries one of these bordering on the scale of great cathedrals in Europe. While the scenery changes the quality of wine remains consistent from winery to winery.

The first winery we visited, Kalala Organic Estate Winery, was located in a true rural setting. Passing farm land, burnt forests from the high number of fires we experience in our dry valley, and table grapes growing on serpentine hills, I am proud to call this spectacular valley my new home town.
As we drove up a mountain that revealed great views from a perspective of the valley I hadn’t seen before, I realized that two of the wineries we were visiting that day were new to me. I had never tried Kalala wines nor have I stepped foot on their property before in the 7 years I have lived in the area. Maybe I’m not as much of a local as I had previously thought.

Kalala’s humble tasting room, located in what could have been a large shop or garage at one point, also held their large steel vats. Some were even located outside open to the elements. Despite this their wines, especially their whites, were some of the best of the day. The most expensive of the whites was a mere $17.95 unless you ventured into their ice wine collection which of course can send you into the upper $60-$70.

On we moved to another winery that was new to me. Little Straw Vineyards boasts to have some of the oldest vines in the valley planted in 1969. An impressive claim considering that most of the vines within the area were planted during the 1980s after the NAFTA agreement. This encouraged local wine makers to compete with the American Napa and Sonoma regions. The Canadian government even offered grants encouraging vineyards to pull out their vines and replace them with quality vinifera grapes.

Little Straw, named so for the literal translation of the Slovakian owners’ family name, was a larger scale winery than Kalala but stayed close to their family roots with our wine pourer being one of the owners’ daughter and “Tech help should something go wrong,” she joked. Again I was more impressed with their whites save for one very rich coffee and tobacco 2010 Maréchal Foch.

Our hostess was extremely knowledgeable explaining to me for the first time what cuvée means in regards to their wines. Normally to make a blend a wine maker will take different grapes and make wines with each type of grape then combine those finished wines in certain portions to achieve a delicious blend. Cuvée, on the other hand, is when different varietals of grapes are taken and blended all together to create one final wine. This process is highly dependent on the vineyard rather than the wine maker which to me sounds “riskier” if you aren’t certain of the quality of the grapes picked that season.

On we moved to Quails’ Gate, a very popular winery within the region and across Canada. You might recognize this place as a pitstop on an episode of Amazing Race Canada. I have been here countless times for dinner and wine tastings. I have purchased their wines a great deal more but this was the first time that I had the care and attention from a host. The tasting room is almost always packed with people and you have to vie for position to be next in line. However, with Distinctly Kelowna Tours you are taken to a separated area where the host imparts his or her knowledge to you in a more one on one approach without needing to run away to the next waiting couple.

Finally, what’s generally thought to be the piece de resistance within the valley, Mission Hill Estate.
Driving through the gates a man from St John’s mentioned, “It’s almost temple-like isn’t it?”
Which sums up Mission Hill Estate perfectly. The site is set up similar to a large monastery with a bell tower and manicured grounds where it wouldn’t look odd for a nun to be spotted strolling. The wine cave resting in the belly of an extinct volcano has a side chapel dedicated to ancient wine vessels and dusty bottles of very old and very special wines from around the world. The back wall where the volcanic rock is most exposed is known as the altar making it clear that Mission Hill is a sort of religious experience for lovers of wine and a good view. It’s no surprise that owner Anthony Von Mandl hired architect Tom Kundig that is known for his church spaces.

Having written about Mission Hill many times before, I can agree that it leaves a lasting impression on you. And of course their wines, both red and white, are delicious and classics for me to turn to. But what Distinctly Kelowna Wine Tours reveals with the West Kelowna tour is that great wine can come from all walks of life and in any setting. From the humble rural farmland to the terraced architectural wonders, wine in this valley deserves the world’s attention.