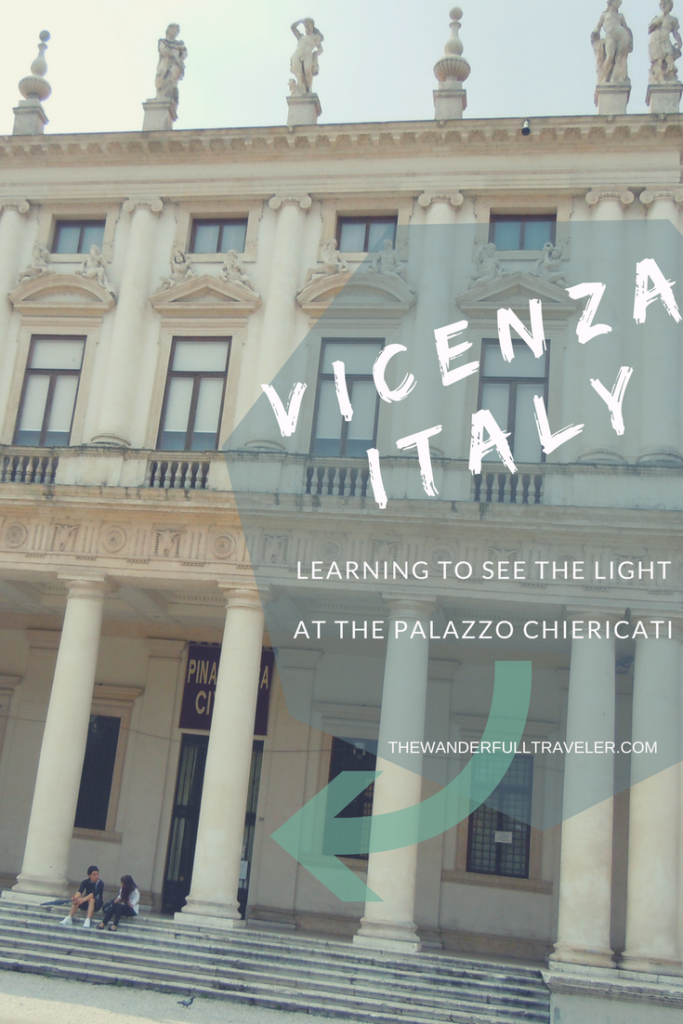 ArtSmart is a group of bloggers who write about a specified topic to be published on the first Monday of each month. You can see my colleagues’ posts at the bottom of this page.

This June the selected theme is Light, a topic that immediately brought me back to a moment in Vicenza, Italy at the Musei Civici. Our art history professor instructed her 30+ students to choose a painting and analyze it without any previous context. We were only to intently stare at the piece and try to figure out what it all meant. Our only outside clues were the title, the artist’s name and the date.

The predominantly female student body assembled in their clicks like nails to the nearest magnet. This left me alone and relieved to be truthful. After days of traveling with a group of dramatic women all at once ecstatic to be away from home and hormones pulsing each time an young Italian spoke a single word to them, I needed some alone time. Quiet time, one on one with a painting, an artist and my own thoughts.

This was a moment that revealed to me how far I had come during my time studying art history. But at the same time it showed me that you really do not need to be schooled in art history to appreciate and understand art. All it takes is some alone time and eyes wide open.

This post represents Light in various ways for me.

1. The piece uses Chiaroscuro and skillfully employs light in areas of the canvas while also withholding it in others.

2. A metaphorical light bulb had been turned on within myself assuring me that my confidence I had felt within art history was not unfounded.

3. Italy is a place of bright shinning happiness for me.

The following is what I wrote for my first ever analyzation of art while standing in front of the actual piece. I lingered over it for at least 90 minutes and each time I looked at it again I noticed something new. Keep in mind, I never knew anything about the artist nor much about religious art at the time of this analyzation.

I highly encourage you to do the same….maybe not for 90 minutes since you aren’t being graded on your experiment (by the way I got an A-!). Take your time and analyze the canvas from the background to the foreground to the texture of the paint and subtle details you would miss if this work was shown to you in a book or projector.

Francesco Maffei’s painting is diagonally divided into two by the use of chiaroscuro, from the left top corner to the bottom right. The right half of the painting is extremely dark and has two figures barely noticeable unless one is up close to the painting. The left half of the painting is predominantly highlighted where the majority of the figures are illuminated. The bottom center shows San Giovanni laying chest down, lifeless, on the floor with faint red strokes representing blood blending in with his long dark hair. The blood is faint and barely noticeable and the gruesome act of San Giovanni’s decapitation does not appear to be the main subject of the piece. Next to him on the right is a cross with a white cloth. His face is towards the viewer however there is an extreme use of black which conceals most of his body and a blue cloth that covers his hips. San Giovanni’s skin colour is very similar to the floor which he lays upon and is drab and pale making him an almost secondary character.

Standing over San Giovanni grasping his hair with his left hand is a man holding something in his right hand which is concealed from the viewer by the man’s body. This man posed in a threatening manner is wearing blue and is with a bear chest. In the foreground is a brightly lit woman in white and black who is hunched over facing the body and is holding a gold charger sticking out from her pelvis. In the background standing centred between the man and woman is a fully clothed man in blue pointing to the gold charger. In the upper left hand corner is an angel leaning over some clouds observing the process of San Giovanni’s decapitation. This angel is hanging from the cloud, despite this being a representation of an indoor event. The angel is almost upside down, with his back to the viewer. Beneath the angel’s cloud is two figures in the far background. The figure closest to the pointing man in blue is in agony, holding their head as they watch the decapitation. The face is only represented and the body of this figure fades into the blackness that is so prominent behind the 4 key figures involved. Another figure with only the face faintly represented to the far left can be seen, however, there is no visible emotion.

At the opposite side of the canvas on the right are two figures in the background. One man to the far right appears to be wearing a mask or his face is concealed by darkness as he reaches upward with a cup or bowl. Above his seems to be a fountain pouring water from the wall and the water spills into the cup. Underneath the man’s arm is another figure that almost appears to be a bald angel as he or she is so faintly represented. However, the figure is kneeling in a praying position towards the reaching figures chest.

The entire painting is loosely painted with sketchy brushstrokes that do not reveal any great detail throughout the image. Rather the brushstrokes seem to highlight what Maffei wanted the viewer to see. For example, the gold charger is shown to be gold with only a few quick and small streaks of a gold highlight. The fountain from the wall is another example as it is highlighted with streaks of white amongst the black that dominates the painting. In this case, Maffei uses chiaroscuro, as the black dominates the canvas, the white of the woman and any highlights jump out and are more striking. Maffei’s brush technique is very loose and realism is something he is not striving for. The faces are in no great detail but rather spots and lines of black which outlines the general shape of a face on all the figures.

As one approaches the painting the woman is the most striking and full figure. The men appear weaker than the woman as her arms and body are so fully fleshed and represented, one gets the idea that she is controlling the situation or that she is fully aware of the decapitation at hand as she stares directly at the head that is about to be severed. The rest of the characters are passive about the event and have no reaction. In this way the woman becomes the main character in this painting as the visual focus is on her. San Giovanni becomes a secondary character or even less as his colour is so similar to the floor and there is so much darkness around his body one’s eye is constantly drawn back to the female figure and her prominent whiteness. The main focus of the painting then seems to be the act of watching the decapitation rather than the decapitation itself. Just as the characters within the work watch the decapitation so too are we, the viewer, as we interact with Maffei’s work. Being unfamiliar with the details of the narrative taking place I still feel as though the work emphasizes how the decapitation intrigues the characters within the work just as the subject matter may intrigue it’s viewers. However, if one analyses this intrigue a feeling of guilt or uneasiness should also follow. This uneasiness only is represented within one character in the work, the figure clasping their head in the far background as discussed previously.   Maffei’s work then becomes not one of visual detail but rather one of a transcendental nature making us think of the corrupted intrigue we share with the characters represented, or else why would we be looking?

Ashley of No Onions Extra Pickles wrote: A Celebration of Light: Ghent in 2015

Jenna of This is my Happiness wrote: The Light in Venice

Don’t miss a post by signing up for my newsletter sent on the 1st of each month. Plus you’ll get a postcard!