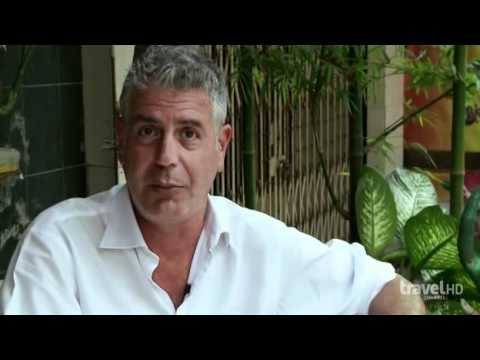 Written in 2011. See also How to Celebrate Anthony Bourdain Day.

As a self-proclaimed foodie, I would like to think that my palate has two sides; a benevolent side as represented by the simplistic David Rocco, and an adventurous side represented by the intrepid Anthony Bourdain. I was fortunate enough to see the latter speak at The Centre in Vancouver. In case you don’t tune in to the Travel Channel as often as I do, you won’t be familiar with Bourdain’s food-based travel show, No Reservations. He has also written many books ranging from cookery, memoir to a fictional mystery novel, however, the book that launched him to the top and gave him my dream job was his first non-fiction book, Kitchen Confidential (2001). His book depicted the culinary roughhouse of the New York chef scene of which he belonged until he wrote an essay for The New Yorker called, “Don’t Eat Before Reading This”. Bourdain, described as the Kerouac of the kitchen and (I say) the television world, then reached stardom with his best-selling books and eventual television shows, No Reservations and The Layover.

His Vancouver appearance was no let down and more humorous than the Just For Laughs Kelowna show. It was a casual event with Bourdain talking about his travels with the occasional video clip, including new footage, to provide examples. For instance, the Travel Channel network will not allow drugs to be shown on their programs. Bourdain explained how he eludes the red tape. He cut to a clip of the Jamaica episode with a local’s face shown from the nose up. A mysterious smoke surrounded the man’s head and was emerging from an unknown source at the bottom of the screen. His point: avoid showing the substance. However, I am interested to see the future No Reservations episode that is based in Amsterdam as most of the show may be edited with faces only half shown and the occasional Dutch specialty being devoured in a fit of munchies.

Bourdain also covered the more controversial aspects of travel and today there is no shortage of destinations with oppressive politics, especially when an American camera crew is trying to capture every moment. Egypt provided a breeding ground for controversy with government officials trying to control what the No Reservations crew filmed, including the average Egyptian diet, which consists mainly of watery lentils and bread. Not only was the government afraid of revealing their poor diet to the world, they were also fearful of the nation’s reaction as No Reservations is aired in Egypt. The Egyptian government, since Bourdain’s last visit, has been overthrown but he suspects their diet and lifestyle remains the same. Whether or not No Reservations informed a small part of the 2011 Egyptian riots, Bourdain could only shrug his shoulders and wonder.

My foodie idol, Bourdain, has traveled everywhere and tried it all from delicious Foie Gras in France to Magic Mushroom pizza (aka “Happy Pizza” for the network) in Cambodia and even the more sinister Fetal Duck Egg in Vietnam. Bourdain is not one to shy away from tasting what ever is put in front of him. Food, in all parts of the globe, not only unites but also represents the culture, the history and politics of a community. Although it seems that the ideal job is to be a culinary adventurer, it also takes some intestinal strength to eat whatever is put before you and be respectful. To consume a cultural specialty is to accept and understand the generations it took to perfect the dish, the history behind it and the family that killed the dog or mystery bush meat in your honour. In these cases, Bourdain would advise to eat it and chase it down with whatever murky alcoholic beverage is served along side it. This is the case even for Vegetarians and, his most loathed ethical eaters, Vegans. If you ever find yourself in Bourdain’s shoes, I urge you to eat! These cultures are giving you their best and if you disrespect them…well, then you could be served their worst, which, in most situations may be more upsetting than spit in your food.

Bourdain ended the evening with a Q&A. Of all the questions asked that night, one stood out in my mind; so, what is Canada’s culinary representation in the world besides maple syrup and bacon? Not surprisingly, Bourdain responded that Quebec inspired cuisine is the next trend permeating the New York food scene. Anthony Bourdain attributes this movement to Chef Martin Picard, among others, who owns the popular Au Pied De Cochon restaurant in Montreal, which offers rich foods such as duck, pig’s head for two and Foie Gras of all kinds including the curious creation of pig’s feet stuffed with Foie Gras.

Emerging from the Bourdain lecture with a deeper understanding of the importance of food in a community, I now question how Kelowna is fairing when it comes to trends, ingenuity and creativity. Although we have some great restaurants, such as RauDZ, Bouchon’s, Waterfront Restaurant and The Terrace at Mission Hill Winery to name a few, I cannot name one place that is bold enough to create something that would rival pig’s feet stuffed with Foie Gras. But then again, this reveals something very profound about our community where the majority demographic consists of the over fifty crowd and the most unique idea I have seen so far is the traditional bannock dish being served in West Kelowna’s Kekuli Cafe. But, in today’s economy only the most flavourful survive and Kelowna’s finest are safe.
(As published in the Phoenix Newspaper, UBC Okanagan)