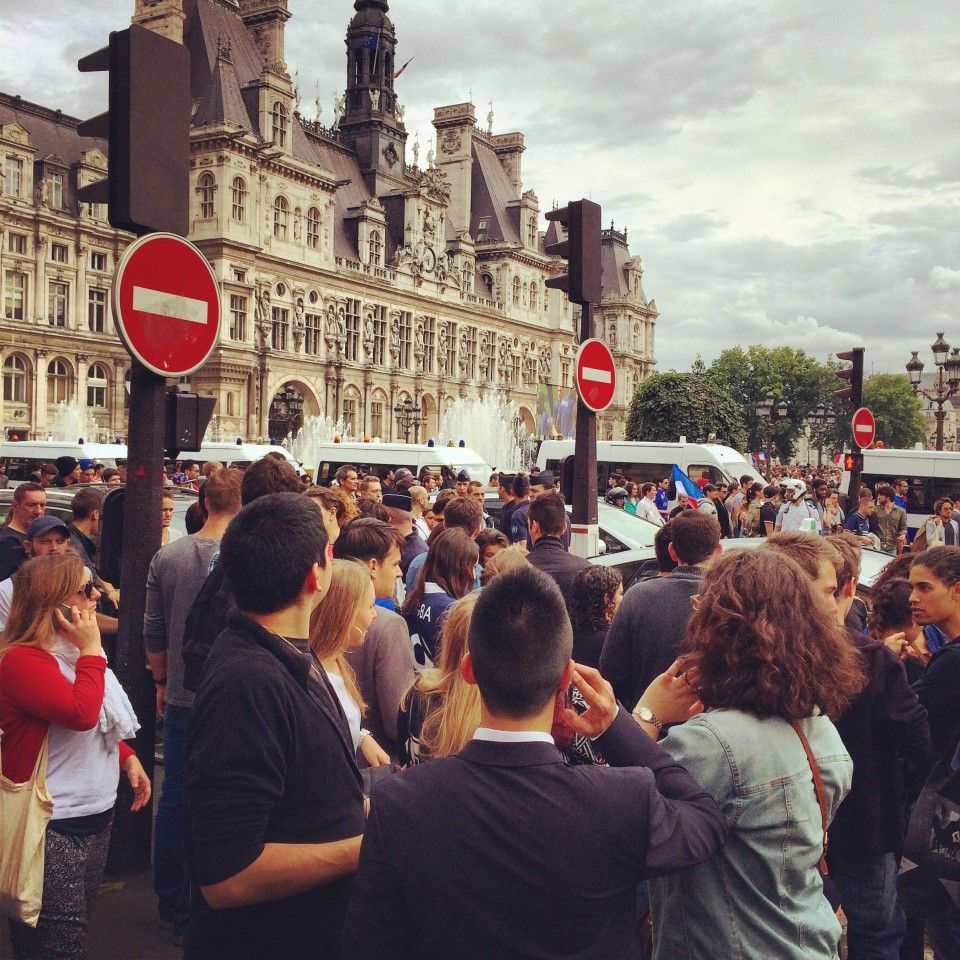 Ok. Maybe I should rephrase that. One of the best meals I had in Paris was in fact eaten at a Greek restaurant in a terribly touristy area.

France has just beat Nigeria in the 2014 FIFA World Cup Brazil, hence the craziness in the image above. We had snuck out our small packed bar just before the game was officially over. Parisians chanted French rhyming songs, something to do with “caca” and we knew the race was on to find a nearby restaurant or else risk going hungry for the night.

We ducked beneath a blue awning sitting street side to people watch the excitable fans meander to and fro in the streets of Paris. Particularly the streets of the Marais not too far from the Pompidou. I didn’t expect to get a good meal being in such a touristy area but only enough sustenance to last me until we got back to our rented apartment where a bowl of fresh apricots awaited us.

The blue awning proclaimed the name of the restaurant in bold Trajan font, “Les Cyclades Brasserie”. To my surprise it was a Greek restaurant and the outside dinning was filling up fast with both locals and tourists alike. No reservations from what I saw. Little did I know it would be the best meal I had in Paris.

I was learning what it meant to settle into Paris. I found that it was mostly relaxing at a café with a carafe of French wine sighing away the afternoon post-gallery visits. This suited me fine. I needed those moments of relaxation after ushering 6 people around France only one of which spoke a bit of French. As you can imagine I was translator, guide, and rectifier of any problems.

A 3 Euro carafe of wine our platter of food arrived for my fiancé and I. This evening was deemed to be our own, in fact the day turned out to be away from the other 4 people who joined us on our journey.

I was oddly happy to see no charcuterie before me. No cheese or French baguette. No terrine of this and that. No duck or escargots. Despite loving France I needed a break from the rich food. And it turned out to be a small trip to Greece for a few hours while indulging in the French tradition of being a Flaneur all at once.

I dipped my pita bread into the mystery pink pastel yogurt spread feeling my body relish the simple pleasure of variety. Meaty tomato sauced lima beans, the soft grape leaf wrapped dolmades, creamy hummus, tangy tzatziki, and the cut of pickled antipasto to play against the richness of the dips of which there were three to choose – all mysteries to me but that was ok. It was new, delicious and made the wine bloom.

A sighing fool playing into the cliché of “ahh to be in Paris” I was interrupted by two familiar faces wandering by in the crowd. My parents! In all the Greek joints in all of Paris! A coincidence we waved them over to laugh at the odds then on their way they went to find their own piece of Paris. It turns out theirs was a tiny shop near their own apartment that sold foie gras, cheese and terrines to be eaten in their kitchenette.

I returned to the Greek menu ordering another 9 ounces of wine to round out my evening right…with a bit of a buzz and a hearty meat meal of lamb and salad (why the fries I will never know). I could have sat there for many more hours and many more glasses of wine but alas we had an early morning. We were off to heart of the Champagne region, Reims – a place I had yet to go but despite that I was the keeper of the train tickets and tour times so off I went to bed to further renew my feet and dedication.

Wandering home I realized that Paris was at once not at all what I expected but also what I had. I expected the delicious rich food but I did not expect that I would tire of it! I did not expect to find an outstanding meal at a Greek restaurant in a place most Parisians tell you to avoid when it comes to food. But sometimes a great meal is a state of mind.

Where’s the best Greek food you’ve ever had?
Have you ever needed a time out from the people or place you were traveling with/to?