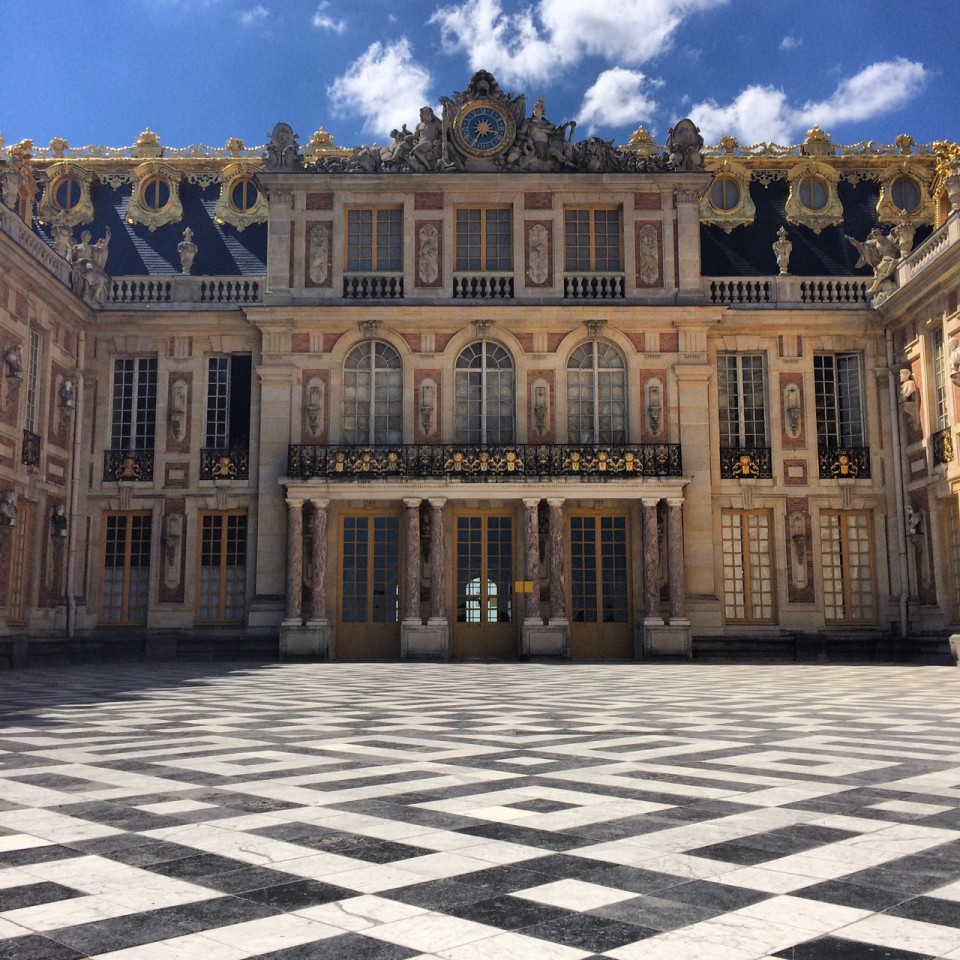 Raised on my tippy toes I struggled to see the hall of mirrors for what it was in its entirety. People of all nationalities and all languages were buzzing about to and fro without any sign of slowing. I stumbled off the tips of my feet and fell into a girl making what’s known as a duck face. She was taking a selfie. Worst of all she was taking a selfie with nothing behind her. No gilded mirrors or chandeliers. No view of the gardens. No frescoes nor paintings of the Sun King or Marie Antoinette. Only her own duck face with the lens strategically placed so that further cleavage played peak-a-boo with whomever she was about to send her photo to.
She hardly noticed me bump into her shoulder as she posed. But then again she hardly noticed anything.

But she wasn’t the only one. Some posed with large iPads hovering above them while the herd moved around them filing into the next room. The only objective was to make it to the next room. To make it outside where the summer air was a little less dulled by the dank breath of people. Whether you made it there with your traveling colleagues or not was another matter.

This, Madame, is Versailles.

Can you tell I am not a huge fan of self-indulgent selfies?
Although they can be done right.
There is an ere of irony though as a girl poses for a self-glorifying selfie with nothing in the photo but herself as she stands in a room of history and excess that she probably doesn’t know too much about. And as I looked around with monarchs staring back at me I wondered, are their portraits akin to selfies in some ways?
Is this duck faced girl the modern day Marie Antoinette?
I shudder to think.

And isn’t that why most of these people attend the “must-see” Versailles? There’s no doubt Marie Antoinette has captured the imagination many. Myself included. I perhaps am one of the few (that I know of) that loves Sofia Coppola’s rendition of Marie Antoinette. The quiet of everyday life, the whispers of treason, lovers, lesbianism and disregard VS the cries of revolution all set against the sounds of an 1980s mix-tape – so well done in my mind.

So how does one enjoy Versailles? How can you leave loving Versailles amidst the selfies, clashing of cultures and the gluey crowds?

Well, Madame, head to the garden. In fact, head to Marie Antoinette’s hide away.
We all know Antoinette as the excessive and self-indulgent woman but in some ways her hideaway estate reveals something more about her.

I am in the camp that Antoinette did not in fact say her most infamous words “Let them eat cake!” Much like in Coppola’s movie I like to think of her as a woman cooped up in a palace plagued with boredom, no family and no idea of the real world that would catch up to her in the end. So the idea of peasant life was quaint to her I’m sure. It didn’t involve gossip, accusations of treason nor did it involve the general pressures of the court (little did she realize it involved hard work and sometimes going hungry). The estate is indeed a picturesque hideaway where not even the king was allowed to roam without her permission.

It is the furthest point from the palace making it the last place visitors get to unless they make it a priority. You’ll be surprised how many do not. Arrive at opening time, set around noon in the summer and simply relax. The gardens here can be appreciated and you can gain a sense of how and perhaps why Marie Antoinette needed this place of respite away from the court. The fragrant gardens set against pink stone cottages are the true highlight of Versailles.

The truth is the palace is my kind of nightmare. There are too many people!

Yes it is a marvel. It is inspiring in a sense to walk the same rooms and passages that your favourite French monarch did over 240 years ago. But you’re doing so with over 2500 people in one day, perhaps even more! The inspiration tends to fall flat by the time you reach the Hall of Mirrors.

So what then? Why even go?
I don’t regret going. If you love a good palace and you feel an affinity for someone special who once occupied the Monarchy, even if it is mistress then you should certainly go. But if not, there are plenty more palaces that deserve your attention and will deliver enjoyment within the Loire Valley and beyond.

TIPS: I arrived at 10 am from Paris with a group of 6 people. Immediately we skipped the long lineup leading into the palace and opted for the garden which is free. I recommend you take either bicycles OR a golf cart (not free). These ensure that you can tour the gardens in comfort while also making for a speedier arrival time at Marie Antoinette’s hideaway estate. If you have a Paris Pass your tickets into Marie Antoinette’s Estate as well as the palace, and both Petit & Grand Trianons are included.

Have you been to Versailles?
Did you like it? Will you return?