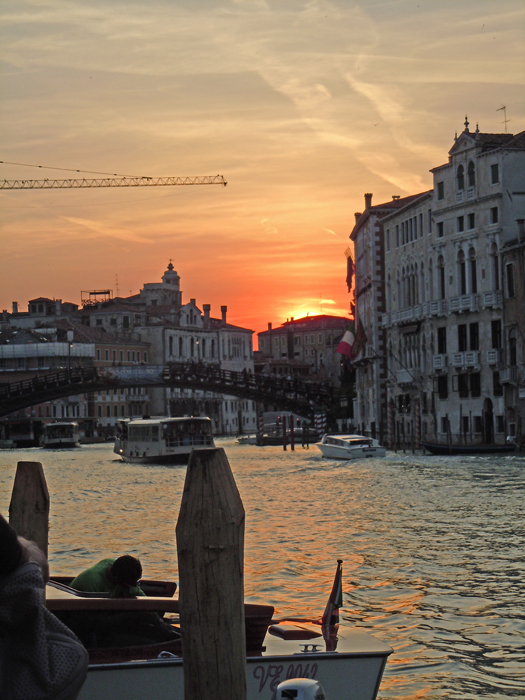 Visiting the Peggy Guggenheim in Venice for the first time is an experience to remember. But visiting it for the first time as the sunsets at a private party with booming music and an Aperol sprits in your hand is another experience entirely. How a group of 30+ Canadian art history students got in thanks to our well connected professor I will never know, nor will I get to replicate the experience – although I am trying! If anyone knows how to get tickets to the Peggy Guggenheim’s evening parties please let me know!

Admittedly these featured highlights of the Peggy Guggenheim’s Sculpture Garden, also known as the Nesher Sculpture Garden, are my own favourites that affected me in some way. Each piece below has a personal emotional connection, wether it be where I began a conversation, contemplated the city of Venice in the light of the moon, or pondered the life and times of Peggy Guggenheim and her 14 beloved dogs before their very headstones. The Peggy Guggenheim is a hidden gem that too many overlook during their visit to the city of Doges. Escape from the crowds and basque in this charming gallery that once served as Peggy Guggenheim’s home along the Grand Canal.

The German sculptor is known for creating his later work called Sphere which was installed at the base of the Twin Towers in New York. It ended up being the only work of art that wasn’t badly damaged after the 911 attacks.
However, this piece, Chariot (Biga) is a similar and smaller version of other larger casts you might see in Munich, Germany for example. A biga is a ceremonial chariot used in ancient Rome. Man, chariot and horses are one in this piece creating a strong insurmountable symbol. In 1957, the same year he created this piece, he was awarded a scholarship at the German Academy in Rome speaking to how the history and city itself may have spoke to him. He was also heavily influenced by African art and you can even see a similarity to the early work of Picasso in the in it’s simple shapes.

Again we find simple lines by this Italian sculptor and even a face (a mask?) that is similar to Picasso’s Les Demoiselles D’Avingon. This is where you start to familiarize yourself with the Peggy Guggenheim’s taste for modern and postmodern works of art. Paladino’s piece can be compared to Jesus with palms open but is almost sexless, an outline. But because of its name we know that it s a noble man split in two. Behind the surface, if we were to walk around the sculpture, we would find that the sculpted man is actually split in two with a space, a gap, in between his front and back half. Imagine this piece in the darkness of Venice. Is this truly a split man or a tomb to crawl into and be kept in? It is alarming, ghostly almost with it’s hollow eyes and mouth just slightly agape. This was one of my most favourite pieces for its perplexing aura and the fact the it made me jump a bit after a couple spritzers.

While I don’t know too much about this Florentine artist I can say that this work, wether it is architectural, sculptural or both, I find it completely fitting to be installed at the Peggy Guggenheim in Venice. Venice is a place that is all at once timeless and yet a living historical museum. As time goes on this place hardly changes on its façade. It’s sinking, it’s in the midst of elegant decay and it changes you after you visit it. But visit it right. None of this cruising in for 5 hours. Peel your faces away from the tourist window shopping of nicknacks that were most likely made in China. Get lost and you could very well change your future. I found this neon quote fixed upon the wall profound. I was in the midst of change. If I hadn’t explored Venice when I did and experienced the people and places I did you would not be reading this now. There would be no blog. And I would be a reader wishing I could go to the places I read about.

Yoko Ono’s Wishing Tree Venice 2003
Not exactly sculpture, perhaps an argument could be made that a tree can be sculpted and altered making it a sort of organic sculpture that needs tending to. But nonetheless this is a highlight in the sculpture garden of Peggy Guggenheim. Yoko Ono, famous for being a rupture in the legendary fab four, The Beatles, she is also an established artist. Before, during and even after she met John Lennon she was performance artist participating in happenings during the 60s as well as conceptual art installations.

The wishing tree, although simple, is one of my favourite installations encouraging participation by the viewer to write their own wishes on white paper and tie it to the tree. The wish tree encourages messages of peace and have been placed in museums across the world from New York to Tokyo and has collected over one million wishes. The tree can be anything from an olive tree, apple, pomegranate, ficus, juniper or birch.

“As a child in Japan, I used to go to a temple and write out a wish on a piece of thin
paper and tie it around the branch of a tree. Trees in temple courtyards were always
filled with people’s wish knots, which looked like white flowers blossoming from afar.”
Yoko Ono: “All My Works Are A Form Of Wishing”.

Marini, an Italian sculptor, often used the horse and its rider within his work. As he continued his exploration of this union and equestrian themes the lines became harsher and much of his lines in the 40s were harsher consisting of the horse’s neck jutting out from its body and the rider mimicking the motions or vice versa. Both man and horse and dependent upon each other, although the man is looking up as if to connect his spirit to a higher power with arms stretched out as a cross. But his erection brings him back to a state of flesh, humanism and dependency.  The body of the man and horse are solid and flexed resulting in the inevitable denouement of sexual strength.
I guarantee you, when you visit the Peggy Guggenheim, you’ll hear laughter when visitors first see this work.

Germaine Richier was a female French sculptor who grew up in France and watched bull fights in Provence. Bull fighting, much like Picasso, had a lasting impression on her to the point where in much of her work there is a presence of the bull. However, she also worked within themes of decomposition as you can see in her piece Tauromachy. The bull is long dead and its slayer with a trident head may not be far behind with the subject’s hollowed decaying torso.
Imagine the bench behind this piece filled with young students, some Italian, some Canadian, all flirtatious and under the spell of Venice’s Guggenheim with Aperol to aid their nostalgic trip.

One of the most surreal moments of the evening  was stumbling upon the gravesite and headstone of Peggy Guggenheim herself as well as her 14 dogs. The museum’s building was in fact Peggy Guggenheim’s home. In the dinning room and bedrooms you can see works by Picasso, Braque, Duchamp and Magritte among others. You can observe sculptures like the Angel of the City and behold the most charming view of the Grand Canal where Peggy Guggenheim sipped coffee as her day began on the outdoor patio. It’s a charming gallery that I think is quite underrated. Yes, see the Doge’s Palace and stroll through San Marco Square but don’t miss ditching the hoards of people and slip into a few of Venice’s smaller galleries and museums.

You can see many of the works I talked about in this short video by the Peggy Guggenheim. I think it does a good job in capturing the magic the gallery possesses in such an elegant and historical city.

This post is part of the ArtSmart Roundtable where travel bloggers with an interest in art write monthly about a designated topic. This month the theme is Sculpture. To see what my colleagues wrote be sure to see below for their links.

Lesley of CultureTripper wrote:Francis Bacon and Henry Moore: Terror & Beauty at AGO
Alexandra of ArtTrav wrote: Eight Exquisite Sculptures at the Archaeological Museum in Florence
Christina of Day Dream Tourist wrote: Man and Myth: Statues of Abraham Lincoln
Pal and Lydian of Art Weekenders wrote: Botero’s Volumous Sculptures Around the World
Erin of A Sense of Place wrote: The Overlooked Reliquary
Ashley of No Onions Extra Pickles wrote: Rodin’s Thinker
Jenna of This is My Happiness wrote: A Sense of Place Through Sculpture

Stay in the ArtSmart loop and receive posts via e-mail by signing up here.