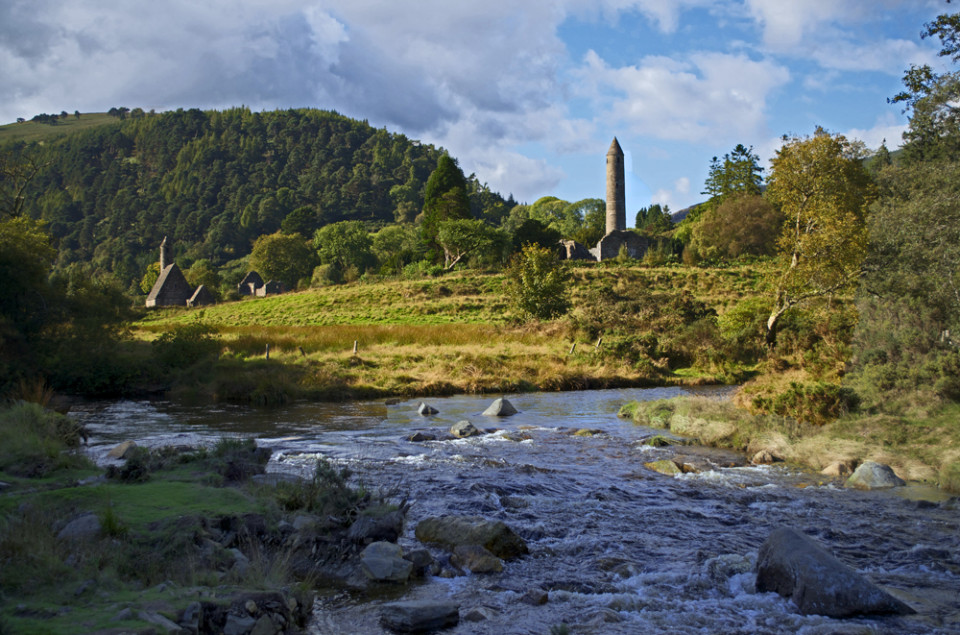 The Wicklow Gap stop turned out to be a bit of a let down during our day tour. So when my sister, Taryn, and I finally arrived at Glendalough I was relieved. We had 3 hours to explore the site before having to board the bus for our trip back to Dublin with Wild Rover Tours. Little did I realize 3 hours would hardly be enough to explore the esoteric monastic ruins and surrounding forest.

Glendalough was one of the most eerie places I had the privilege of visiting while in Ireland. It is known as a very popular tourist spot but it is easy to get away from the crowds and explore the innumerable ruins on your own. But if you’re easily spooked like me you’ll expect to run into a ghost at every corner.

Glendalough means glen of two lakes. These two lakes are surrounded by Medieval monastic ruins as early as the 6th century and was founded by Saint Kevin. The area where tourists tend to populate is the “Monastic City” which is the largest grouping of ruins, such as the round tower and cathedral among others, surrounded by a large cemetery.

Instead of heading straight to the city I would recommend going to the furthest point first. In this case you have choices and will be able to lose the crowd if you are adventurous. My sister is a horror movie fan but when it comes time to breaking rules she’s the first one running in the opposite direction (kinda like in New York…). Yes I do get scared too. I only just overcame my fear of zombies and am now able to watch The Walking Dead without nightmares. But I don’t run because curiosity always gets the best of me. Probably a bad quality to posses in any horror film.

Taryn and I really had no idea what we were getting ourselves into after we decided to walk the extra 10 minutes to Lower Lake then an extra 15 to Upper Lake. The forest that surrounds the walk way is in itself mystical. The lush green ferns and old trees with the sounds of weeping waterfalls are on your left while a marsh of thin white trees planted in mossy water are on the right.

When you finally reach Upper Lake the amount of people lounging in the sun with their children and dogs pull you back into reality. Just a bit beyond the lake if you keep following the path is a place where you will seldom find anyone roaming.

#1 rule when trying to lose the crowds – assume they are lazy. Always take the extra steps to find what others aren’t willing to work for. I can’t tell you how many people on our bus had heard the worlds “extra 20 minutes walking” and decided on the spot that they would only be visiting the Monastic City then grab a bite at the nearby Glendalough Hotel.
There’s nothing wrong with relaxing but I’ll do that back in Dublin.
So there we were wandering into the Glendalough forest finding intimate moments alone with ruins. Our photos were completely uninterrupted. I had no need to edit people out nor did I have to wait for people to get out of the way at their own pace.

So what was I roaming through?

This is the Reefert Church built in 1100 CE and it is my understanding that this is thought to be the area where the original 6th Century site was built with Saint Kevin at the helm. However, they still have yet to excavate the site which is amazing to me but then again the allure and mysticism is emphasized with what little they know of the first settlement.

Further on you can explore the ruins of St. Kevin’s Cell overlooking the lake but only the foundations remain. Unfortunately the most interesting site, St. Kevin’s Bed, is at the opposite end of the Upper Lake which makes it only accessible by boat. Here you can find a 12th Century church and grave markers made of stone. The “bed” of St. Kevin refers to the cave above the lake where he reputedly took solace and even awoke one morning to find a woman in a red dress at the foot of his bed. He took this as a sign of the Devil trying stray him from the righteous path and into temptation.

After two hours of discovering hidden Glendalough we had to rush back to the Monastic City to see what we initially came for. This turned out to be perfect timing as the cloud cover reduced and the evening colours began to set in over the Wicklow mountains. After most of the tourists subside back into the hotel or their buses the ruins seemed to glow golden and blue.

I am curious, how do you escape the crowds?
Have any good ghost stories?