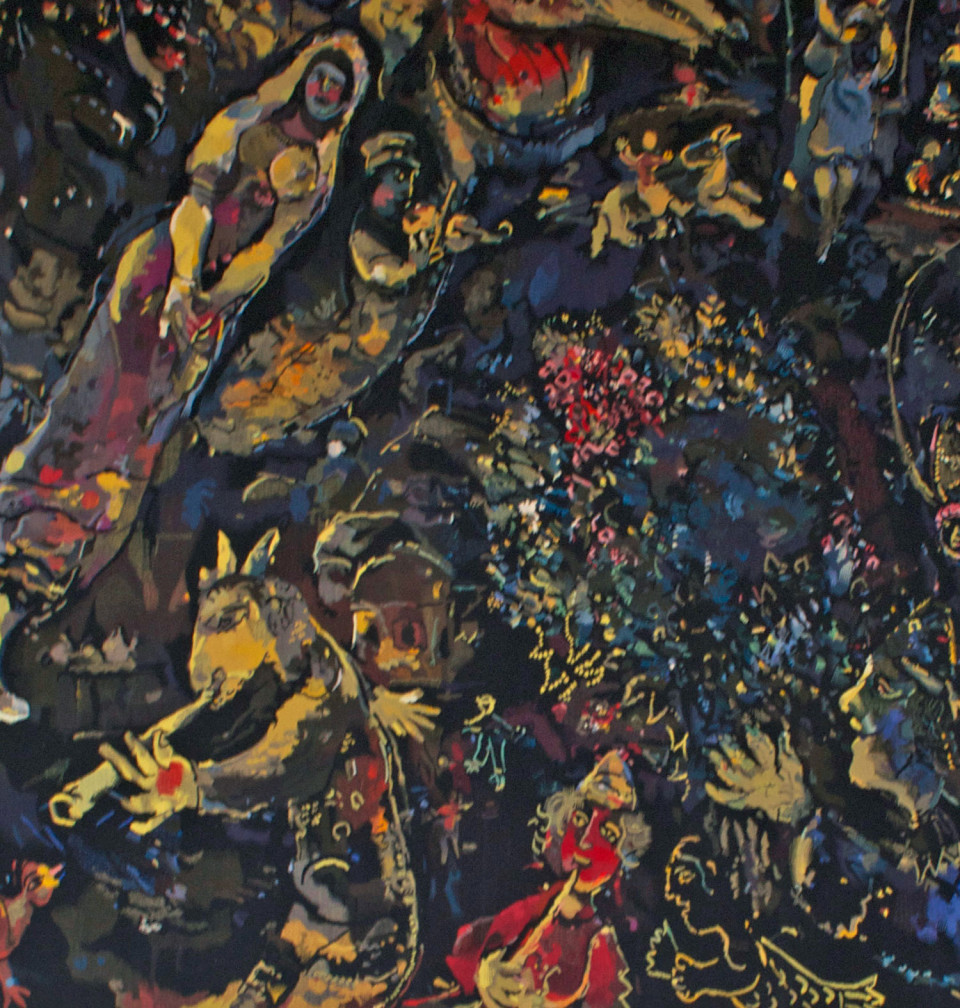 This month at ArtSmart we’ve loosened the topic to be somewhat of a personal choice. In case this is your first time hearing of the ArtSmart Roundtable, it is a group of bloggers with a love of travel and art history. Each month all the bloggers involved write a blog post interpreting the theme in their own way. You can read more ArtSmart posts with the links at the bottom of this blog.

This month’s theme is “Artist” and I want to go a little unconventional. I first found my topic by walking into a grand white room with pews, an elongated fireplace and a huge tapestry positioned like an altarpiece at the back of the room. Below the tapestry is a black piano with signatures covering most of the wooden interior belly (ex. Celine Dion & Sting). As I write this the room sounds like a personal devotional chapel with expensive fixtures but it is actually used as an events room/tasting room at the Mission Hill Winery in West Kelowna, BC.

The proprietor, Anthony Von Mandl, searched for 2 years to find a art piece that would be able to compliment the room, wines and what Mission Hill Winery stands for as an accomplished institution that began in Mandl’s day dreams. He finally found such a work of art in France by Yvette Cauquil-Prince, a woman who worked with Marc Chagall to translate his artwork into expertly woven tapestries.
Seeing the photo you would probably have thought at first that the piece above the piano was a painting with it’s rich colours and the illusion of painted texture, however, the amount of detail reveals the caliber of the craftswoman.

Yvette Cauquil-Prince worked with many modernists throughout her life, figures like Picasso, Paul Klee, Max Ernst (who I consider the playboy of Surrealism but that’s another story) and Kandinsky. Unfortunately resources on her biography are scarce but what I did discover is that she studied at the Académie Royale des Beaux-Arts in Brussels finding herself in good company alongside Rene Magritte and James Ensor. Amazingly her talent as a tapestry artist was self taught. It wasn’t until 1960s where she was introduced to Chagall and an immediate bond was formed transforming her life forever. Chagall often referred to Cauquil-Prince as his spiritual daughter while she explained their relationship as she being the conductor and Chagall the music.

The particular tapestry that hangs in Mission Hill, called “Animal Tales” is an homage to Chagall by Cauquil-Prince and is a collage of all his most accomplished works literally woven into one brilliant piece.
What I love about this tapestry is that Cauquil-Prince used her creativity to create this piece and is not a “copy” from Chagall’s painting like her other 39 or so tapestries she and Chagall collaborated on. She decided where to position each character, that variety of colours used and overall design of the piece which in my mind elevates her out of the realm of craftswoman and into fine artist.

For Mission Hill to acquire such a work was not an easy task. As it was explained by Chef Matt Batey during our winery tour, once Mandl found the work he desired he had to convince Cauquil-Prince that it was indeed meant to hang in this Canadian winery. This inspired Mandl to bring the late Cauquil-Prince to the Okanagan location hoping that she would be swayed by the beauty of the valley and the caliber of the winery. Luckily Cauquil-Prince agreed to make the journey to Canada (something my 67 year-old grandmother would have never done) and luckily she approved. Her agreement to sell the work to Mandl created what is now known as the Chagall Room.

I can only surmise as to what attracted proprietor Anthony Von Mandl to this particular work. The way in which it brings together, in a magical way, all walks of life and characters that can be found at this winery – a bride with the numerous weddings held here each year, the spectators at the top right like the spectators during the outdoor concert series in summer, the wreath at the middle of the scene representing the abundance of the land, the mythical characters creating a sense of magic that, I would assume, Von Mandl associates with the power of the fermented grapes when they cascade over your palate. The colours alone are representative of Mission Hill Winery with their pinot noir grapes growing steps away from the tasting room, the blues of the lake and sky, the golds of the riesling ice wines.
But what I assume attracted Von Mandl to Chagall in the first place was his association with dreams. For Von Mandl this winery started as a dream as he left his corporate job and decided to take a leap of faith and devote himself to wine. So the Chagall room at the Mission Hill Winery perhaps is a devotional room, a chapel dedicated to following dreams no matter how surreal they might seem.

Why do you think this work was chosen to be displayed at Mission Hill Winery?

ArtSmart Posts for May 2013

Jeff from EuroTravelogue wrote “The Art of Édourard Manet, Pioneer of Modernism”